Writer Guy Helminger spent four weeks in Yemen. Below he tells us about his encounters with a happy Somali girl, a morally outraged taxi driver, a friendly imam – and about authors without books 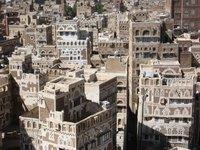 Sanaa is one of the ancient Yemeni cities dating back to the Sabaean dynasty of the 6th Century BC. Sanaa's Old Town was made a UNESCO World Heritage Site in 1986

​​ The old fireplace cavities in the kitchen floor are covered over with a long glass plate topped with piles of provisions. On my first morning I meet Iman, the home help, who is working at the sink; she greets me in English. It turns out she is from Somalia and fled with her family to Yemen when the civil war broke out.

She doesn't remember now how old she was. Fifteen, perhaps. The refugee smugglers who brought them by boat forced their passengers to jump overboard and swim the last kilometre to the shore.

"Many drowned," Iman recalls, "the only thing I can really remember is how frightened I was." Now Sanaa is her home and she is happy. The house has had many European guests, most of them aid workers. Iman is wearing a grey cardigan, sneakers, a pair of wide trousers and a cap.

I ask where I can buy bread. Before I have time to protest, the rubber gloves are off and she is already on her way down the stairs to procure some bread rolls for me. I call after her to wait, and protest in vain that I can go myself "You don't know where to go," she answers and is gone.

"In Yemen you need only three words"

Five minutes later she calls from the stair: "Don't be alarmed!" She enters the kitchen, laughing, clad from head to foot in black, only the eyes visible. She passes me the bread rolls, still warm, and disappears. No sooner is she gone, than back she comes, dressed as before in the grey cardigan, and back at the sink.

"Do you speak Arabic," she asks. I tell her I don't. "But it is very easy," she tells me. My uncle went back to visit friends in Somalia after he'd been here for a few years. When he was asked whether he could speak Arabic, he answered, "In Yemen you need only three words" The first one, a question: "Work?" The other two are "Yes" and "No," so you can understand the answer.

Of grand mosques and grinding poverty

Many Somalis live in refugee camps, Iman says. And although Yemen takes in all the Somalis who manage to reach the country, they are left to fend very much for themselves thereafter. 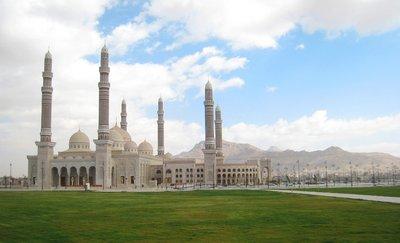 Yemen is one of the world's poorest countries. A fact however that has not stopped the president from having another mosque built - paid for by the president out of his own pocket according to the word on the street

​​ For many Yemenis, too, it's a case of just getting by as best they can. For days on end they stand by the roadside in front of the Bab al-Yemen, gateway to the Old City, tools at the ready, waiting, hoping to find a job for the day. Like living clothes racks, with ten jackets draped around their shoulders they wait for a sale, maybe of one of their second-hand oriental daggers. And at every crossroads the women and children begging, or trying to sell paper handkerchiefs.

Yemen is one of the world's poorest countries. A fact however that has not stopped the president from having another mosque built; an ostentatious project on the grand scale and one paid for by the president out of his own pocket according to the word on the street in Sanaa.

"We need a proper infrastructure in the hospitals," says Mohammed the taxi driver against the constant background of Koran verses streaming from his cassette player. "The education system is bad. If I go to a mosque, then it's to the one in my district."

Perched beneath their sunshades along the side of the road are traders selling batteries, household goods and watches. Their right cheeks bulging with qat leaves, as if they had tennis balls lodged in them. 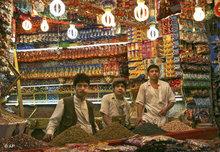 "Instead of buying meat and fruit for their children they waste most of a day's pay on qat leaves," Mohammed, the cab driver, exclaims angrily

​​ "They are goats chewing the cud," Mohammed exclaims angrily, "what good is it supposed to do? Instead of buying meat and fruit for their children they waste most of a day's pay on these leaves, just to give themselves a little high." He gives a blast on the horn, but we have come to a standstill. "What do people in Germany make of such a country," Mohammed asks, at the same time turning up his cassette player as though not expecting an answer.

"Most people in Germany don't even know where Yemen is," I shout, and if it is mentioned at all on TV, it will be because someone has been kidnapped.

Mohammed shakes his head. Yes, the kidnappings, he yells back, "they are all savages who do that sort of thing. They have a good country and they don't know it. I get angry about my country, but when people like you come here and let me see it with other eyes, then I see how beautiful it is."

​​ "Tourism would be good for Yemen," he says, "but it just doesn't get a chance because of such stupid actions. There are bad people everywhere. What the Israelis are doing now in Gaza, that is also disgusting. It is the reason why many Arabs like Hitler, you know, because he didn't like the Jews either."

"Not Hitler again," I cry. He understands what I mean.

Up ahead a policeman is directing traffic, but cars from a side street are now blocking our already slow progress. Mohammed finds some consolation in driving forward as close as possible to the door of car blocking the way and blasting the horn again.

A different sense of time

I'm almost an hour late when we finally arrive at the mosque in the northern part of Sanaa where I am to meet imam Abdul, but it is not something that seems to bother him too much. He raises his hand in protest at my repeated apologies. "Have you come all this way just to apologise?" I laugh and tell him that had it been the other way round, I would not have waited so long on him.

"But you do not live in Yemen," he replies. An impressive library covers one wall of the sitting room, mostly religious writings, sermons by famous men, but there is literature and poetry also.

The clash of civilisations – shadow boxing for the ignorant

I ask him what he thinks of people who believe that religion and terrorism go together. 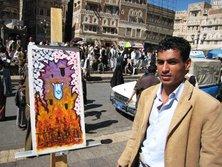 The Yemeni Writers Union boycotted the literature conference in the city's German House because, according to the Union, "neither the German people nor the intellectuals have made their position clear on the Gaza conflict"

​​ "It is wrong," he says, "such people are badly misguided; they are acting against Allah. It is a minority that has succeeded in doing so much damage to Islam in recent years, in a way that no one ever managed to do in the past. They are responsible for creating a situation where the West suddenly fears a religion whose true followers just want to be good people, just as you Christians do."

The clash of civilisations he says is no more than shadow boxing for the ignorant. It is ignorance of others that makes people afraid. And, unfortunately, neither side knows very much about the other and each has been content to make do with prejudice.

It's an opinion that is confirmed on the following day by the Yemeni Writers Union. The writers, it seems, do not want to meet me and the literature conference in the city's German House is to be boycotted because neither the German people nor the intellectuals have made their position clear on the Gaza conflict.

A farcical situation. There were demonstrations in all the major German cities and I at least as German-speaking author have been talking about the Israeli attacks every day with tradespeople, with writers, with newspaper vendors. Fortunately not all Yemeni writers are of a mind with their union.

Over coffee in an Ethiopian restaurant, Said tells me that the situation is difficult, even for local writers. At the moment there is not even a printing press and so consequently no books. Texts should at least be talked about. He tells me that Yemen has no publishing industry, no marketing or distribution. All novels, short stories and poetry have to be published by the authors themselves.

"It's easy to make money from writing in Germany," says Said.

I beg to differ on this.

In the end the conference does go ahead after all, smaller than originally planned, but with discussion sessions that are all the more intensive for that. A good beginning.

Luxembourg-born Guy Helminger was a guest of the German House, Sanaa and Aden – the German Yemeni culture centre from 28.12.2008-27.01.2009 as part of the LiteraturenTreffen – Symposium 2009 (literatures meeting). His trip was undertaken with the support of the German Embassy in Sanaa and the Goethe Institute.

Helminger travelled to Teheran in 2007 as part of the West-Eastern Divan project. He wrote a blog on the experience for Deutsche Welle (in German only).

Born in 1963, Helminger first came to attention as a poet and playwright for both theatre and radio. His latest novel "Morgen war schon" has been published by Suhrkamp.

Authors without Books
Young Yemeni Literature Is Looking for Its Place
Three gatherings of German-Arabic authors in Yemen have created a fragile cultural connection between the two countries. But Yemeni literature is still largely unknown in Germany. Günther Orth has studied this literature and recently compiled and translated an anthology of Yemeni stories

Yemen
Grass Grows in the Desert
What's the Nobel Laureate doing in Yemen? And why has he brought young literary figures Ms. Hermann and Mr. Schultze along with him? Nils Minkmar of the Frankfurter Allgemeine Sonntagszeitung went in search of the answers

Freedom of the Press and Democracy in Yemen
"Yemen Is a Law unto Itself"
Nadia A. Al-Sakkaf is editor-in-chief of the independent English-language daily Yemen Times, which was established in 1990. She spoke to Alfred Hackensberger about media, press freedom, democracy, and tribal culture in Yemen

END_OF_DOCUMENT_TOKEN_TO_BE_REPLACED
Social media
and networks
Subscribe to our
newsletter