Skip to main content
Hamid Skif: "The Geography of Fear"

The Refrain of a Shadowy Existence

In Maghreb literature his voice is impossible to overhear: Hamid Skif. The Francophone author has gone on working in the name of human rights. In his new novel "The Geography of Fear" he gives shockingly authentic voice to an illegal immigrant. By Naima El Moussaoui

Ever since arriving on this continent he has been forced to hide: no one can be allowed to know that he exists. He must wait… All he can do is uphold the 'sans droits' code of behavior: don't go out by day, don't move about in public places, don't get sick, no fare-dodging, don't argue on the street, don't talk too loudly. And: act natural.

Outside, on the streets, the hunt for illegal immigrants has intensified; thousands of people who have come in search of happiness end up back where they started. Repatriated: herded together and deported.

This is the life led by the protagonist of the new novel by Algerian writer and journalist Hamid Skif, "Geography of Fear". Fear is his constant companion. It seizes his hand, alerts him to dangers; he is grateful for its company. Without it he would be lost, he says. Sometimes they talk – he and fear. "It's good to talk to someone," he says.

From do-gooder to traitor

For months this shadowy being has lived in a small room rented for him by Michel Delbin, a geology student. Without the student he would not have a chance: Michel also provides him with food and newspapers.

But what is behind it all is not just altruism, humanity or a rebellious spirit: Michel falls in love with his charge. Unrequited love and wounded pride make monsters of people who are good at heart. And thus the do-gooder Michel turns out in the end to be a wretched traitor: when he realizes that his immigrant has left to find happiness with his great love, the neighbor's stepdaughter.

The protagonist would be called a 'sans papiers' in France, a 'sin papeles' in Spain, 'clandestini' in Italy. In Germany those concerned with political correctness would call him an illegal immigrant, while others would simply call him an "illegal". To cover one's back, one could append a "so-called" or put the word in quotation marks and add: after all, it's a person we're talking about here.

Hamid Skif spares himself the whole fuss. Just once in the novel he uses the word 'haraguas', fare-dodger in Arabic. Literally: "one that burns". What? The boat in which he ventured the crossing to Europe. But he divulges neither the protagonist's name nor his location – information his hero would never disclose himself. Thus this person remains a n'importe qui, any old person, one illegal immigrant among many.

But the author gives a voice to his hero – and thus, symbolically, to all other 'sans papiers' as well. A voices that is now soft, now loud, but always urgent and hypnotic. It is the immigrant who narrates directly out of the situation he experiences. He gives readers a glimpse into the hidden, disturbingly shadowy existence of the clandestine ones.

The wealth of the imagination

By refusing to name the place in which the novel is set, Skif avoids denouncing any specific country. Still, the reader comes to assume that this is all happening in the heart of the "patrie des doits de l'homme", in France, probably even in a Parisian banlieue.

One of the narrator's statements seems to be a clear indication: "The laws forbidding searches before dawn have been abolished. They're cleaning with the 'kärcher' (pressure cleaner)."

"Nettoyer au Kärcher" were the words of the super-cop, French president Nicolas Sarkozy. As Minister of the Interior, shortly before the suburban riots in the fall of 2005, he declared his intention to use a "pressure cleaner" to purge a Parisian suburb of the young people he referred to as "racaille" (rabble).

Hamid Skif's hero is a survival artist, a person who draws on his own inner wealth. Who rummages through it and always finds a beautiful, sad story worth telling: of the loves of his youth, myths of his African homeland, of his family… And he relates his memories the way they are told in the Orient, digressing further and further, embroidering here and there, seeing everything in his mind's eye.

The uncanny phantoms of dreams

The novel's narrative style blurs the borders between waking and dream, reality and memory. In the protagonist's existential borderline situation, time's chronology has become unimportant, indeed meaningless: the issue at stake is sheer survival. 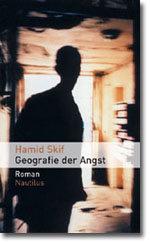 ​​To avoid falling prey to despair, the protagonist evokes the dark figures of his past, the uncanny phantoms of his dreams: cruel employers, hustlers and human traffickers, the Moroccan smugglers and drug dealers; he tells of corrupt officials and of the pushy, unscrupulous policeman with a lingerie fetish.

His contact to the outside world is limited to the tragicomic incidents of daily life in the apartment buildings across the way. Cut off from the outside world, shut up in this trap, he makes up stories about the people he can see through the skylight of his hiding place. They become a part of his life; he does not miss a single act.

The narrator is so authentic, his account so intense, that "Geography of Fear" could be the diary of an actual illegal immigrant. He shows fear's brutality in all its facets.

"In this book I have attempted to take the consequences of fear and confinement to their limits by describing what would happen if the cities of the west were to become the scene of a gigantic hunt for human beings," the author said of his novel. "This is not a delusion, it is foreseeable reality."

A possibility that at one time was reality, a reality which Anne Frank confided to her imaginary friend Kitty: in the Holocaust. When reading "The Geography of Fear", one is inevitably reminded of "The Diary of Frank".

"As a teenager the diary of Anne Frank made a deep impression on me," Hamid Skif has said in several interviews, "but the situations are completely different, and I do not want to draw any parallels."

The novel ends with the protagonist's arrests, but it is unclear what happens to him next: a little door which Hamid Skif leaves open for the reader.

The onslaught of the poor

In his last words, the narrator lets out all his anger at rich, arrogant Europe: "You bombard us with this wealth that drips from the TV screens, and you want us to stay down there… You'd rather support the ones that suck our blood rather than helping us deal with the tyrants… You are the murderers' accomplices."

He prophecies an army of illegal immigrants, the onslaught of the poor on the fortress of Europe – a prophecy that comes true every day.

Hamid Skif manages to depict the existential situation of a 'sans papiers' with shocking precision, revealing the absurdity of a world in which documents determine whether one is treated as a human being or not. Every human being deserves to be treated like a human being. The poetic truth of a novel could not be simpler.

Following increased government censorship and a fundamentalist assassination attempt, Hamid Skif fled to Germany in 1997, where he has lived in exile ever since. The dissident journalist, poet and writer received the Literature in Exile Prize in 2006 for his epistolary novel "Monsieur le president". In 2007 "Geography of Fear" won the "Prix de l'association des écrivains de langue francaise" and the "Prix du Roman Francophone".

Illegal Migration to Sardinia
The El Dorado for Algeria's "Harragas"
In the Maghreb, people who cross international borders without valid tickets and visas are known as harragas. Although the phenomenon of illegal migration from North Africa is nothing new, the destination of these migrants certainly is, writes Hamid Skif

Aid to Refugees in Sicily
God's Squatters
Biagio Conte, Franciscan monk and son of a Sicilian building contractor, is creating a furor with his spectacular, altruistic actions for illegal immigrants in Sicily. Arian Fariborz visits him in his mission

END_OF_DOCUMENT_TOKEN_TO_BE_REPLACED
Social media
and networks
Subscribe to our
newsletter