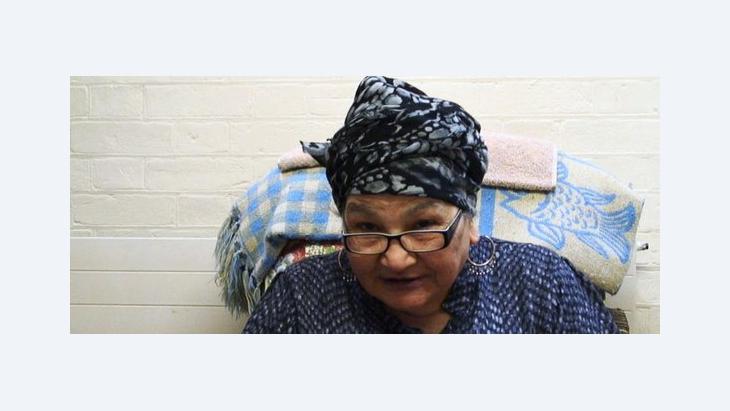 ﻿The focus of this year's Berlin International Film Festival (Berlinale) is on films that offer different perspectives on the recent upheaval and transformations in the Arab world. One of these is the documentary film In the Shadow of a Man, which provides moving portraits of four Egyptian women. Amira El Ahl spoke to the film's director Hanan Abdalla

Shahinda Makled utters these words while images of the 2011 popular uprising in Egypt flash behind her. The audience sees women leading demonstration marches and mobilizing the crowds with slogans. These are women who bravely stand in opposition to the police and who fight side-by-side with men against the totalitarian regime in Egypt.

A life for justice 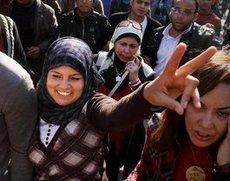 The "female face of the revolution": women played an active role in the popular uprising against the authoritarian Mubarak regime

​​Shahinda Makled has been fighting for the rights of women and farmers in Egypt her whole life. As he lay on his deathbed, her father gave her a piece of advice for life: "Defend your principles to the death." "He was a wonderful, progressive man who thought it important that I study and be independent," says Shahinda Makled, her hands sifting through the pile of yellowed photographs spread out in front of her. History and stories lie in front of her; behind her, a life dedicated to the struggle for justice.

Shahinda Makled is one of four women who feature in Hanan Abdalla's documentary film In the Shadow of a Man, which was shot in spring 2011. The film is being shown until 19 February at the Berlin International Film Festival as part of the Panorama programme.

Hanan Abdalla runs through the centre of Cairo. It is early evening and the streets are quieter than usual in this city that never sleeps. She has just come from the cutting room; her next film is in the middle of production. She has to be at the airport early the next day. Yet, there is still a great deal to organize before she leaves.

Above all, before she catches her flight, she wants to visit her best friend in the hospital, who just the previous day was hit with buckshot during a demonstration between Tahrir Square and the Interior Ministry. Her friend was lucky to survive; two pellets hit her in the face.

It is this horrible, often incomprehensible reality in which Egyptians currently find themselves that Hanan Abdalla manages to capture on film. In the process, she often forgets that she is placing herself in great danger.

Last December, when she received word that her documentary film had been accepted for the Berlinale, she found herself in a very similar situation. It was 18 December, and the police and army were attacking a group of demonstrators in front of the cabinet offices in the centre of Cairo. Many were injured and some lost their lives during the protest.

"I was so furious at what was taking place in the streets that initially, I couldn't deal with the good news from the Berlinale," she says. It took some time for the news to really sink in. "It is overwhelming and, at the same time, I am still impressed that it is my film that will be shown at the Berlinale," she admits. After all, this is the 23-year-old's first film.

Intimate glimpses into the daily life of Egyptian women

​​After studying politics and philosophy in London, where she was born and raised, she attended a number of film courses. She was attending a documentary film course when the revolution in Egypt broke out. Hanan Abdalla immediately dropped the course and headed straight for Cairo. She originally intended to stay for only ten days. Those ten days eventually turned into a year.

By chance, she discovered through a friend of the family that the organization UN Women wanted to make a film about women and the revolution in Egypt and was looking for someone to realize the project. "At first, I really didn't want to do it, because, for one thing, I didn't feel confident enough, and for another, I thought there were more important topics," she says. But Abdalla let herself be talked into it. "And thank goodness," she says today.

The film In the Shadow of a Man lets four women from different social backgrounds tell the story of their lives and that of women in present-day Egypt. The result is a series of intimate portraits offering glimpses of the daily lives of women in Egypt that outsiders rarely have the opportunity to see.

The four women welcome Hanan Abdalla not only into their homes, but also into their lives, sharing with her their most intimate wishes, hopes and yearnings. The documentary is not primarily about the revolution, the resistance to the Mubarak regime or the struggle on the street, it instead focuses on women's social problems, which have not changed since the uprising.

"For me, the economic factor was crucial," says the young filmmaker. Badreya Mohammed, one of her protagonists, tells how she dreamed of going to art school. Yet, nothing came of her dream; she got married, had four children and has since lived in the countryside in Beni Suef in upper Egypt, where she raises ducks and chickens and tills the land with her husband.

"My husband hasn't been able to find work for the past 18 years," she says. "Why should we even bother to get a degree if we can't find a job afterwards?" Millions of Egyptians share the same fate as Badreya Mohammed. Stories such as these explain why they were fed up with Mubarak's system and why millions took to the streets. 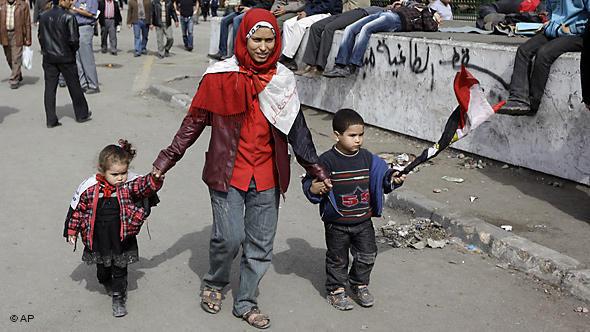 Somewhere between revolution and everyday life: "The documentary is not primarily about the revolution, the resistance to the Mubarak regime or the struggle on the street, it instead focuses on women's social problems, which have not changed since the uprising," writes Amira El Ahl

Berlinale focuses on the Arab Spring

This year's Berlinale sets its focus on the Arab Spring. The programme for 2012 includes films that explore the so-called "Arab Spring" and its developments from a number of perspectives and in a wide variety of formats.

A number of directors from the Arab world will be screening documentary films on how they personally lived through the events, while others will cast their gaze on the region through documentary and fictional films that do not directly deal with the subject of revolution. "Instead, they address vital existential issues and the necessity to define one's own identity – at times even in a humorous form," states a press release from the Berlinale.

Hanan Abdalla is already busy shooting her second documentary film. This time, the subject is the participation of women in the Egyptian parliamentary elections. She seeks to always provide a cinematographic interpretation of events that is honest and that she herself would want to watch. Her first film has successfully adhered to this motto. In any case, it is certainly worth going to see her film debut, In the Shadow of a Man, at the Berlinale.

END_OF_DOCUMENT_TOKEN_TO_BE_REPLACED
Social media
and networks
Subscribe to our
newsletter