Headscarf debate heats up ahead of Turkish vote 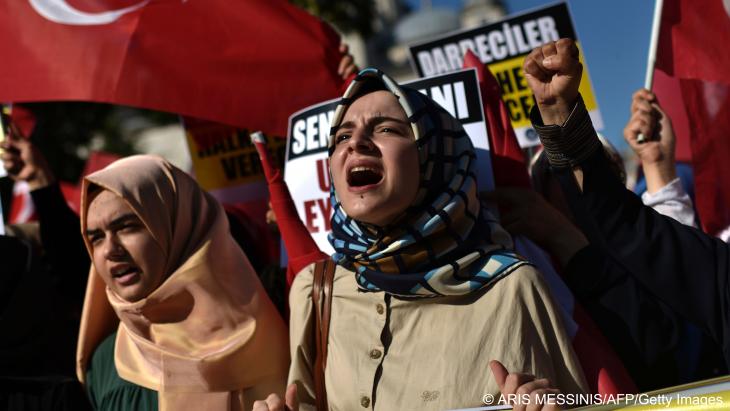 Turkey's Islamic-rooted ruling party will submit a constitutional amendment to parliament next week enshrining women's right to wear headscarves at work and in daily life, reviving a hugely divisive issue in the officially secular state.

The highly-politicised decision by President Recep Tayyip Erdogan's AKP party comes six months before the next election – and one that promises to be a tight race.

The overwhelmingly Muslim-majority country's founder Mustafa Kemal Ataturk had sought to settle the issue when he built contemporary Turkey out of the Ottoman Empire's ashes a century ago. But headscarves still polarise Turks, exemplified in popular culture by the hit Netflix series "Ethos" in 2020.

"It's all the rage now: every show has to have a veiled woman," sighed an urbane psychiatrist while flipping through television channels with a remote in her hand.

Erdogan's 20-year stint as prime minister and president saw him champion the rights of conservative Muslims – including veiled women – after decades of more secular rule. But it was his likely presidential rival from Ataturk's secular CHP party who appeared to push Erdogan to mull constitutional changes that could be up for a referendum.

Kemal Kilicdaroglu – trying to woo Erdogan's core supporters and strip away some of the AKP's vote – accused the president of trying to "hold veiled women hostage". He conceded the CHP had "made mistakes in the past" by imposing headscarf curbs and now wanted to write women's right to cover themselves in schools and at work into law.

Erdogan immediately went on the offensive. "Is there discrimination against veiled or unveiled women in schools or in public service? No!" Erdogan said. "We were the ones who achieved this."

Discouraged in the name of modernity when the modern Turkish republic rose from the Ottoman Empire's ashes in 1923, headscarves were gradually banned from schools and offices. The AKP began to change that in 2008, lifting the ban at universities, colleges, and then in the civil service, parliament and the police. Turkish women overwhelmingly hailed these measures, said historian Berrin Sonmez, who is also an ardent defender of women's rights.

"Those who view the headscarf as a religious symbol that contradicts the principles of secularism should understand that (their thinking) is discriminatory," Sonmez said. "Prohibited or compulsory, the headscarf violates women's rights only if the rules for wearing it are imposed by the state," said Sonmez, who is veiled.

Weighed down by criticism from some feminists, veiled women would benefit from guarantees to safely stay covered up while going to school or work, Sonmez said. In the absence of more recent studies, she cited a 2012 survey showing 65 percent of Turkish women wearing a headscarf. She estimated that half of them do so today.

"Kilicdaroglu's draft law is an important way of standing up to Erdogan," said Sonmez, who opposes the president.

Fervent supporters of the women's revolt movement convulsing neighbouring Iran, Turkish feminists largely view Erdogan's headscarf efforts as a bid to secure the support of the most conservative fringes.

"Both the secularists' ban on the headscarf and Erdogan's 'democratisation package' that lifted it were launched in the name of emancipating women," Gonul Tol, Turkey programme director at the U.S.-based Middle East Institute, wrote in an online report.

"In reality, however, they both sought to impose their own version of the ideal woman on society," she said. The ban's lifting "was emblematic of Erdogan's broader Islamist populist agenda".

Tol suggested that the 68-year-old leader "never truly intended to liberate" women as he largely views them as "mothers or wives, not as individuals". "The key to truly liberating women is to empower them as individuals and legislate women's right to choose."

The debate rages on both sides. One Turkish website, whose title translates as "You will never walk alone", is aimed to women who are forced to wear a headscarf and now want to take it off. On the opposite end of the spectrum, the AKP has publicly backed a series of demonstrations supporting the "defence of the family" at the expense of LGBTQ rights.

Almost all the women at those rallies appear veiled.    (AFP)

More on this topic
Turkey's headscarf debate: The politics of hijabWomen in Turkey: The headscarf is slippingIslam and democracy in Turkey: A headscarf affair, a women's affair?
Home
Print
Newsletter
MoreAll Topics

END_OF_DOCUMENT_TOKEN_TO_BE_REPLACED
Social media
and networks
Subscribe to our
newsletter