In the early 1990s, heavy metal bands in Egypt were branded as Satanists by religious hardliners and persecuted. Today it is much easier for them to perform in public. Arian Fariborz checked out the heavy metal scene on the Nile

In the 1990s, Cairo's "metalheads" still looked solely to western bands for inspiration; now they are creating their own dark variations of heavy metal

​​Harder, faster, louder: guitar riffs and drumbeats resound from the semi-darkness of the auditorium in Alexandria's world-famous new library. A group of youths stand in a semi-circle in front of the stage, all around twenty years of age, their hair either cropped short or hanging down to their shoulders. They wear pentagrams around their necks, are tattooed and wear black T-shirts emblazoned with inscriptions such as "Metallica", "Dreams of Madness", "Pure Norwegian Black Metal", "Killadelphia" or "Religion sickens me". The atmosphere at the opening performance of Alexandria's "Third Metal Night" is already electric.

If it seems strange at first glance that hard rock and heavy metal concerts are even possible in a conservative, largely Muslim society such as Egypt's, this musical phenomenon becomes truly astonishing when one considers what "metalheads" in Cairo and Alexandria have experienced in recent times.

Cairo journalist and blogger Hossam el-Hamalawy, who was himself part of the scene at the time, remembers that the metal scene was much bigger and more widespread at the beginning of the 1990s. "But all of that came to an abrupt end in 1997 when the security forces carried out raids on metal bands and fans."

"We never once broke in there," says el-Hamalawy, "we just bribed the guards with a few Egyptian pounds to let us in. Then we went inside the palace, which was totally un-restored, and you could see the enormous beds and everything, it all looked very sombre and pretty creepy. We thought, wow, it's cool here. But then we just left." 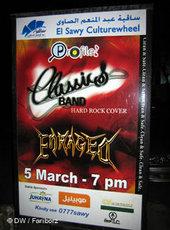 Venturing out from underground: concert poster for a hard rock gig in the Cairo district of Zamalek

​​When the media-fuelled rumours refused to die down, the government felt called upon to take action against the alleged Satanists. Over a hundred metal fans were arrested, many of them less than thirteen years of age. Endless interrogations were held in the jails and there were reports of some "metalheads" being tortured.

"It was totally crazy," recalls el-Hamalawy. "The police turned the metal fans' entire flats upside down, confiscated CDs and looked for any black T-shirts they could find. That was the only evidence they needed to brand someone a Satanist."

The arrested youths were paraded on television. They were asked absurd questions about the black masses they had allegedly held in the Baron's Palace, worshiping the devil and ritually sacrificing cats.

It wasn't only the mass media and the authoritarian Mubarak regime who inflamed the scandal; Christian and Muslim clerics launched into rants defaming the "metalheads" as devil-worshippers and junkies. Finally the fans were forced to answer to the Mufti of the al-Azhar, the centre of Sunni erudition and to "renounce Satan".

Black headscarf instead of head-banger mane: a metal concert at the new library in Alexandria

​​"Satanists? Rubbish!" Members of the Cairo band "Divine" are appalled. "They were all friends of ours, perfectly respectable people. The media made up all kinds of strange stuff, but luckily in the end no official charge was ever brought against them!"

The staged media scandal and excessive public moral indignation in Egypt were actually very useful to the Mubarak regime, explains Hossam el-Hamalawy. "In 1996/97, the economic situation in Egypt was extremely bad, the radical Islamist uprisings were continuing and we had the impression that the government was looking for something to distract the people from the country's real problems."

Resurgence of the "metalheads"

In order to avoid attracting the attention of the mass media and the police, Egypt's "metalheads" now act much more prudently and conventionally, avoiding illegal concerts, drugs, fights and unscheduled visits to the Baron's Palace.

Luckily this hasn't affected the quality of their music, quite the opposite; while at the beginning of the 1990s they mostly covered western metal and hard rock legends such as Metallica, Slayer or Iron Maiden, Egyptian bands are now going their own way and creating local musical genres such as the elegiac "Oriental Black Metal".

The local scene has now recovered from the setbacks of the 1990s; since 2002 at the latest, the land of the Nile has been gripped by a metal frenzy. There are apparently between sixty and seventy bands in Cairo and Alexandria, and the number is increasing all the time.

The Egyptian Center for Culture and Art
The Best Music in the "Place"
As is often the case in the Arab world, one almost has to search with a magnifying glass to find an independent art and cultural scene, even in Egypt. It is, however, increasingly showing signs of flourishing. The Egyptian Center for Culture and Art is one of the independent cultural centers to have emerged in recent years in the mega city Cairo. By Sebastian Blottner

Interview with Rafael Alcántara
Cairo's Music Scene between Censorship and Awakening
Last fall, the Munich saxophonist and singer Rafael Alcántara was invited to Cairo by the Institute for Foreign Cultural Relations. In this interview with Stefan Franzen, he talks about his impressions of Cairo's music scene and the influence of the state

END_OF_DOCUMENT_TOKEN_TO_BE_REPLACED
Social media
and networks
Subscribe to our
newsletter