At this point, if not before, as the extant documents show, Hedwig Klein begins to think of fleeing the country as her only option. But elsewhere in the world, doors are by no means open to persecuted German Jews. Her only chance of getting a visa lies in her professional qualification. The desperate Klein writes to people abroad, pleading for help.

Hedwig Klein is finally assisted by the Hamburg-based economic geographer Carl August Rathjens. After unsuccessful approaches to people in France and the USA, Rathjens turns to a friend of his, a professor of Arabic in Bombay. The professor invites Klein to India – and the British colonial authorities give their consent.

Equipped with her Indian visa, she leaves Hamburg on 19.08.1939, on board the steamer Rauenfels. Two days later, she sends her hopeful postcard to Rathjens. But then the crossing to India is suddenly halted. When it calls at Antwerp, the steamer receives the order to return to a German port within four days.

The boat turns round and heads back to Hamburg. It has been recalled due to the German invasion of Poland on 1 September – the start of the Second World War. 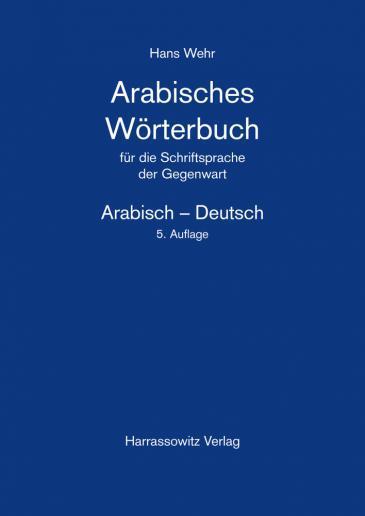 Hans Wehr completed the " Dictionary of Modern Written Arabic" in 1945 – yet it would be seven years before it was published. These days also available in English translation, it is still regarded as one of the best Arabic dictionaries in the world. Yet the fate of "Dr. H. Klein" remains concealed from readers

Hedwig Klein now suffers "the full torment", as Rathjens would later put it, that all German Jews had to endure after the start of the war, from wearing the "Jewish star" to being evicted from her apartment and forced to move into a "Jewish house".

The geographer Rathjens is also treated like an enemy of the state. He has already been dismissed from his position in the Hamburg World Economic Archive (in 1933) for being "politically unreliable". At the start of 1940, the Hamburg security police lock him up and interrogate him for a month in the Fuhlsbuttel concentration camp. He is very lucky to be released from "protective custody" at all.

Her former professor Arthur Schaade tries once more to do something for Hedwig Klein. He puts "his lady academic" in touch with the Arabist Hans Wehr in Greifwald. Wehr has been a member of the National Socialist Party since 1940. An essay of his recommends that the government make allies of "the Arabs" against England and France, not to mention against the Zionists in Palestine.

But the government, or more specifically the Foreign Office, sees Wehr as an important man for another reason. He is working on a modern Arabic dictionary. The oriental specialists in the Foreign Office regard this dictionary as an indispensable resource for getting Adolf Hitler's book "Mein Kampf" successfully translated. The translations produced to date have proven inadequate.

Musicians from Morocco to Iraq have been crossing paths at the Oriental Summer Academy in south-western Germany for ten years. Matthias Wagner, who founded and directed the ... END_OF_DOCUMENT_TOKEN_TO_BE_REPLACED

The Human Rights Film Festival Berlin has been held for the third time in 2020 under the patronage of Nadia Murad. In just a short time, this festival, which was initiated by the ... END_OF_DOCUMENT_TOKEN_TO_BE_REPLACED

The small East African nation of Djibouti has so far evaded musical discovery by the West. Now, however, the country's official national band, Groupe RTD, is picking up ... END_OF_DOCUMENT_TOKEN_TO_BE_REPLACED

Germany is home to 21 million people with a migrant background. Hospices and providers of palliative care are adapting their practices to make them more inclusive. By Christoph ... END_OF_DOCUMENT_TOKEN_TO_BE_REPLACED
Author:
Stefan Buchen
Date:
Mail:
Send via mail

END_OF_DOCUMENT_TOKEN_TO_BE_REPLACED
Social media
and networks
Subscribe to our
newsletter