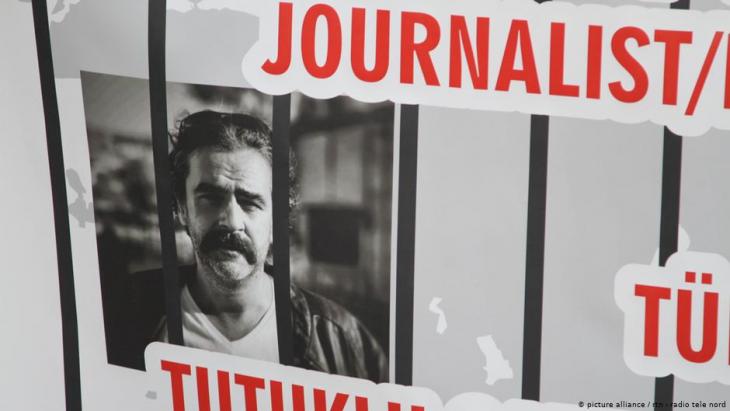 Held hostage by the Turkish authorities

Former correspondent for Germany's "Die Welt" Deniz Yucel comes to terms with his imprisonment in Turkey in an intimate new book. Impressively and humorously, he talks about his struggle for dignity and self-assertion and provides an insight into the debates behind the scenes. Nevertheless, some questions remain unanswered. By Ulrich von Schwerin

Anyone familiar with the case of Deniz Yucel might think that there is nothing left to say on the subject. Not only have German media been providing detailed reports over many months on the detention conditions of the Istanbul correspondent for "Die Welt" and the legal and political complexities of the case; his lawyers, friends, colleagues and those politicians involved have also delivered exhaustive commentaries. Not least, Yucel has repeatedly expressed himself directly from prison and afterwards in letters, articles and interviews.

His recently published book "Agentterrorist" (Agent Terrorist) in which he processes his one year in detention in Turkey, is nevertheless worth reading. The 46-year-old yet again proves himself to be a good narrator, writing about his experience in a manner that is reflective, humorous and frequently self-deprecating. Even though, after a year in detention, he has every reason to feel anger and hatred towards the government of President Recep Tayyip Erdogan, his stance remains severe, but considered.

Not only does the son of Turkish guest workers show himself to be an authority on the political history of Turkey, but also capable of clever, balanced analysis. Regarding the PKK in particular, a movement often played down and glorified by the German left, his assessment is both critical and accurate. In his interview with PKK Commander Cemil Bayik, senselessly classified as "terror propaganda" by public prosecutors, he did not give the group an easy ride.

The book re-lives a turbulent year that severely tested German-Turkish relations. From the row over Turkish election campaign appearances in Germany, Nazi accusations by the President, and the abstruse terror accusations against 600 German companies, right through to Erdogan calling on voters of Turkish origin in Germany not to vote for the SPD, CDU or the Greens, 2017 brought one clash after another. 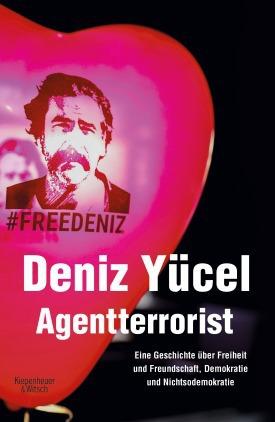 Yucel, the political pawn: the former Turkey correspondent of "Die Welt" spent almost a year in Turkish custody from February 2017, nine months of which were in strict solitary confinement. After the public prosecutor's office presented an indictment in February 2018, he was released and left the country

But as it turned out, relations were most severely strained by the detention of Deniz Yucel. Following his arrival in Istanbul in early 2015, the "Die Welt" correspondent rapidly made himself unpopular.

What caused a furore was his appearance at a press conference with Chancellor Angela Merkel and Turkish Prime Minister at the time Ahmet Davutoglu in February 2016 in Ankara, which Yucel used to pose a question that dealt a sweeping blow to Turkish and German policy.

As a German with Turkish heritage, Yucel was particularly exposed, because in the government camp criticism was quickly interpreted as disloyalty. Following his appearance at the press conference, the turmoil was so great that "Die Welt" chose to temporarily recall its correspondent. Later, following his detention, the newspaper was criticised for allowing him to return to Turkey when emotions were still running high, especially as he did not possess an official accreditation.

Yucel does not really explain why, as a left-wing "taz" journalist, he went to a newspaper that several years previously listed 10 reasons on its front page why Turkey did not belong to Europe, among them the abstruse claim that "the legacy of the Antiquity and the Judeo-Christian ethic" had failed to leave any mark on the country. That such a conservative publication would engage a journalist like Yucel also raises questions.

The answer is probably because he was courageous and awkward. When in autumn 2016 he and other journalists from the radical left-wing group RedHack gained access to private emails from Erdogan's son-in-law and energy minister Berat Albyarak, he did not hesitate to report the story. When at Christmas 2016 arrest warrants were issued for several Turkish journalists as a result of the RedHack revelations, his name was also on the list.

Because Yucel feared he would be arrested, the very same day the German consul general authorized him to seek refuge at the ambassador's summer residence on the Bosporus – ironically right next door to Erdogan's official residence in Istanbul.  The case quickly came to the attention of the German Chancellery, which endeavoured to find a solution with the government in Ankara. Erdogan learned of the case from a Turkish politician in January 2017. From that moment on, Yucel became a top-priority case.

In mid-February, Yucel decided to go to the authorities. But things didn't go as planned. Because of his article, the public prosecutors dealing with the case ordered his arrest on the grounds of "terror propaganda" and "public incitement". After two weeks in police detention, Yucel was taken to Istanbul's high security Silivri Prison – and placed in isolation. In a speech a short time later, Erdogan described him as a German agent and PKK representative. Yucel had become a political football.

With humour and obstinacy

Over the months that followed, Yucel dealt with the stream of new legal impositions, verbal attacks and beatings by prison guards in a remarkably unyielding fashion. With humour and obstinacy he fought to maintain his dignity and a minimum of control over his life. But occasionally his battle went off the rails and he himself admits that he sometimes behaved recklessly and "like a diva" towards those who were fighting his corner.

Yucel's plan to stand as a candidate in the German general election representing the Berlin district of Kreuzberg to gain deputy status is not the only thing that seems bizarre. His idea to sue the prison administration, investigating public prosecutors and Erdogan himself for false imprisonment was somewhat over-the-top. It took a great deal of effort for his lawyers and his wife Dilek to convince him that not only would this exacerbate the situation for everyone, it would also be futile.

Finally, his colleagues and the German diplomats were left totally exasperated by his refusal to accept the offer of freedom negotiated by former chancellor Gerhard Schroder and Foreign Minister Sigmar Gabriel in February 2018. Instead of accepting the condition that he immediately leave the country, he chose to remain in detention. It was only when "Die Welt" agreed to charter a plane instead of the government, that he finally complied.

In hindsight, the question arises whether it was wise to make such an issue of the case at the highest level at such an early stage. Might Yucel have possibly avoided detention had he gone to the police straightaway? Would Erdogan have taken him hostage if Berlin hadn't stepped in on his behalf so soon? And might the case have been resolved more quickly if it hadn't attracted so much public attention in Germany in the wake of Yucel's arrest?

These are all questions to which we will probably never know the full answer.

Some companies in Germany are reluctant to hire Muslims. But it is not only the Muslim applicants who are losing out, so too are the companies. After all, there are multiple ... END_OF_DOCUMENT_TOKEN_TO_BE_REPLACED

The European Court of Justice has given its backing to companies that don't allow female Muslim staff members to wear headscarves – as long as they don't permit the wearing of ... END_OF_DOCUMENT_TOKEN_TO_BE_REPLACED

Ayaan Hirsi Ali’s new book "Prey" claims to examine how Muslim immigration threatens the rights of Western women. Indeed the injustices women face only seem to matter to her when ... END_OF_DOCUMENT_TOKEN_TO_BE_REPLACED

The Saudi national team is set to play the German Olympic squad at the Olympics in Tokyo later this month – a chance for the outsiders to make their mark. At the same time, and ... END_OF_DOCUMENT_TOKEN_TO_BE_REPLACED

I regret very much that I worked for the Bundeswehr. If the Taliban knock on my door, I hope they shoot me right away. Guest article by Ahmad Jawid Sultani END_OF_DOCUMENT_TOKEN_TO_BE_REPLACED

END_OF_DOCUMENT_TOKEN_TO_BE_REPLACED
Social media
and networks
Subscribe to our
newsletter