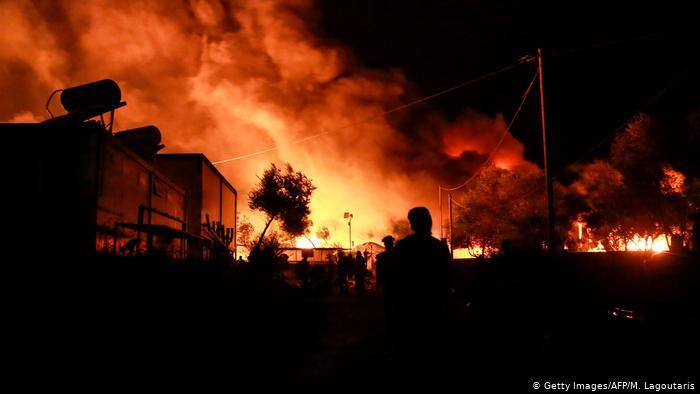 Fire broke out in a number of places around the Moria refugee camp on the Greek island of Lesbos late on the night of Tuesday, 8 September 2020. This led authorities to suspect arson. Some in the camp have suggested locals set the fires; other reports point to the migrants themselves. 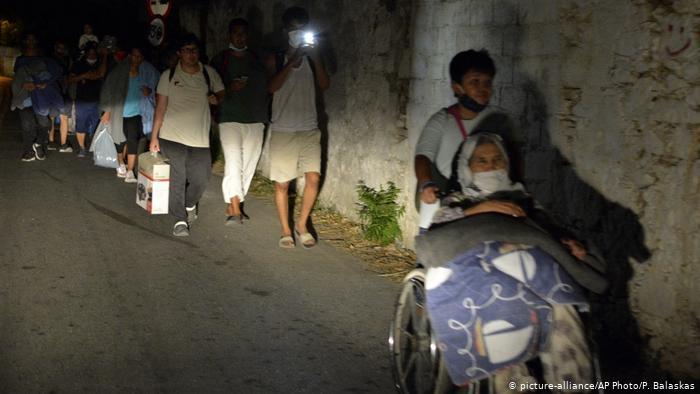 All of the inhabitants of the hopelessly overcrowded camp managed to get to safety. According to media reports, many migrants fled into the hills and forests nearby. Some are said to have begun walking to Mytilene, the island's capital. There have been no reports of death or injury. 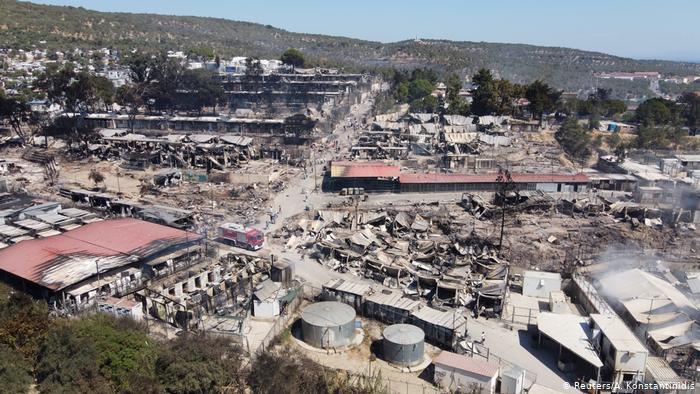 Moria, which is located on the eastern shore of Lesbos, just 15 kilometres from the Turkish coast, was originally designed to hold up to 2,800 people. At the time the fires broke out, it held some 12,600. Living conditions in the camp were catastrophic before the fire. Looking at this photo taken in its aftermath, it is glaringly apparent that no one will be able to live there again any time soon – at least not in humane conditions. 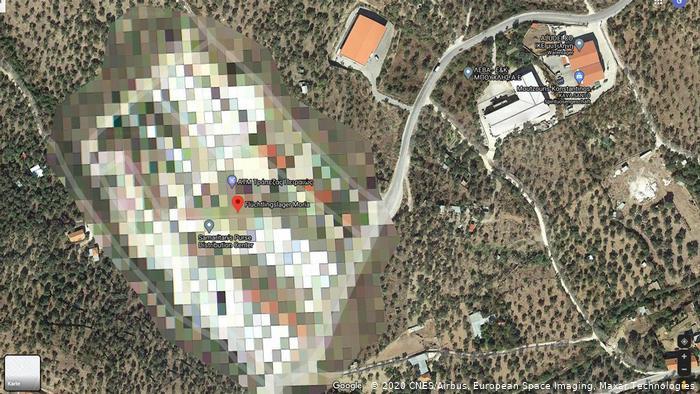 Anyone hoping to see satellite images of the camp on Google Maps is out of luck. The site has been pixelated. "Google itself does not pixelate satellite images," the company has said, referring to third-party entities that supply the satellite imagery. It is unknown why the image of the refugee camp has been digitally altered. 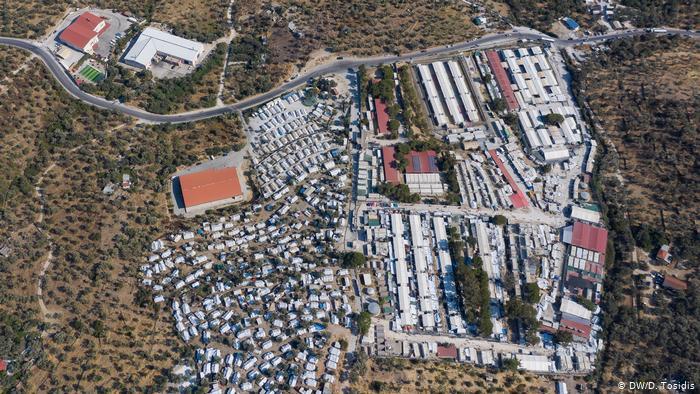 This older aerial view of the same area shows that the camp has been greatly expanded. In the earlier Google Maps images, the building with the red roof stands alone. In more recent photos, however, it seems to have been swallowed up by the camp. 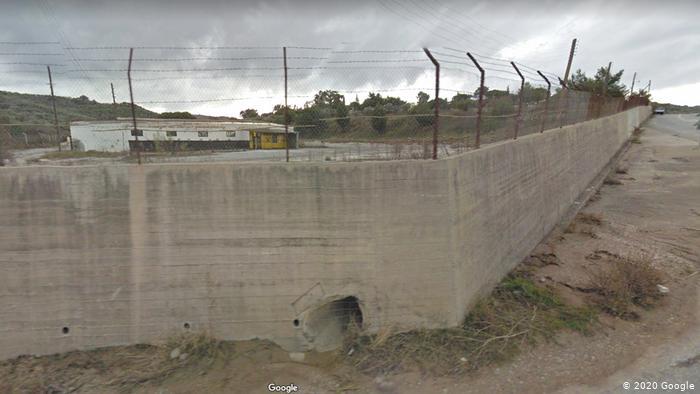 The camp is not pixelated on Google Street View. Whereas the pixelated satellite images on Google Maps date from 2020, those on Street View date from December 2011 – before there was even a camp. At the time, the only thing there was an old military barracks. It was not until October 2015 that Greece began registering asylum-seekers at the site before taking them to the mainland. 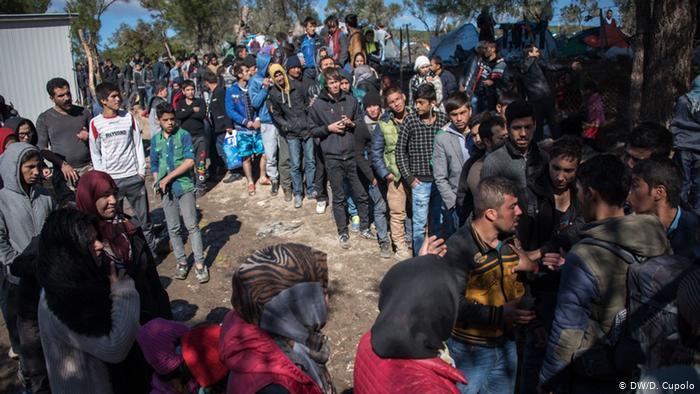 When this photo was taken in October 2015, refugees only stayed at the camp for a short time. That changed drastically in March 2016, when the EU signed its so-called refugee deal with Turkey. Since then, refugees have had to endure long stays before being sent to other EU countries or being deported. 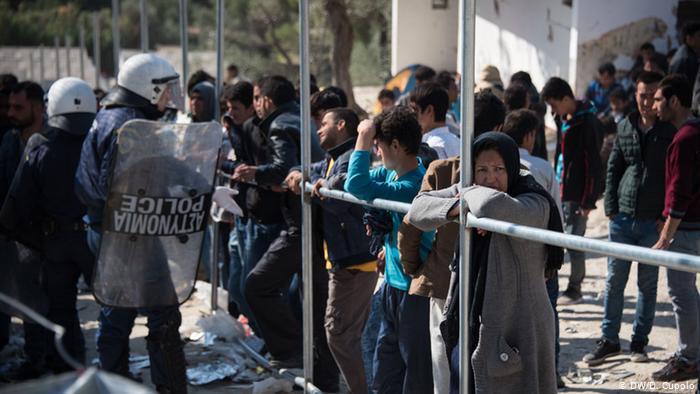 As a result of the EU-Turkey deal, refugees are no longer allowed to be transferred to the Greek mainland because Turkey would then no longer be obliged to take them back. But as EU states disagree over who should take how many refugees, people remain in the camp for longer and longer periods of time. The overcrowded camp is populated by many people from a wide range of nations. Understandably, tension runs high. 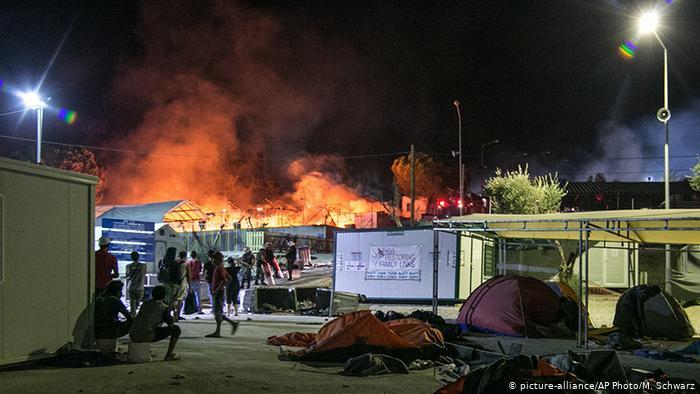 Those tensions first erupted in September 2016, in the form of violent conflicts during which fires were set and much of the camp was destroyed. At the time, there were only 3,000 migrants in the camp. A few months later, several hundred migrants set fire to EU asylum agency containers in the camp in protest at the slow pace of asylum application processing. 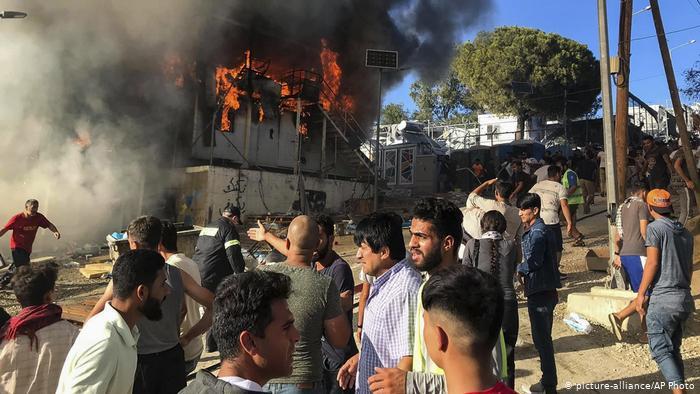 There was another major fire at Moria in September 2019. What started as a blaze in an adjacent olive orchard quickly spread to the camp itself. Less than half an hour later, another fire broke out in the camp, killing a mother and her infant child. At the time, Moria housed some 12,000 people. 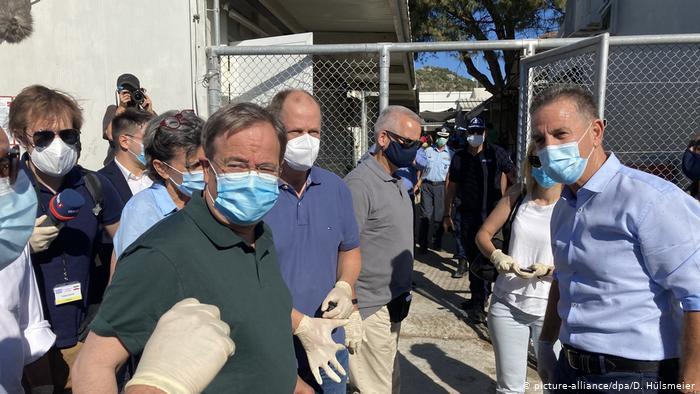 In August, North Rhine-Westphalia State Premiere Armin Laschet visited the camp. His state is the most populous in Germany. The politician expressed a desire to see the so-called "wild section" of the camp, which is located outside its boundaries. However, that part of the visit was quickly cancelled for safety reasons as the overall mood was again tense, with many migrants chanting "Free Moria". 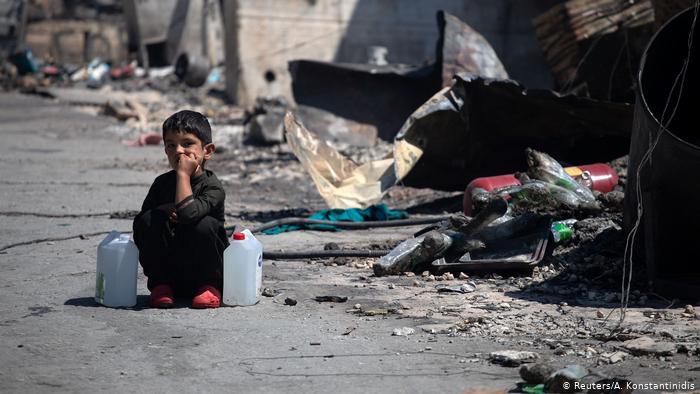 An overcrowded camp with appalling sanitation and medical conditions as well as ethnic tensions and now the coronavirus … life at the Moria refugee camp was dire before this week's blaze. But what will happen now? Is this the end of Moria, or perhaps the moment to create new, more humane living conditions? It is devastating that no one can answer this question.

END_OF_DOCUMENT_TOKEN_TO_BE_REPLACED
Social media
and networks
Subscribe to our
newsletter