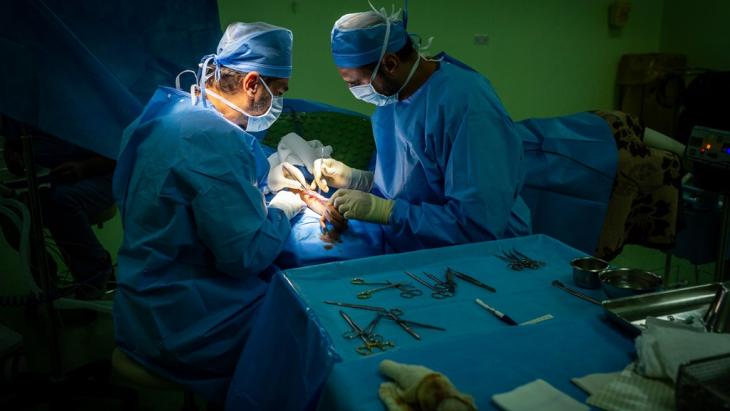 The hospital for all wars

In a Jordanian clinic, doctors have been treating patients from across the Middle East for more than a decade. It's a place that has seen the suffering caused by five wars. Philipp Breu paid the hospital a visit

The skin on her hands and face has the texture of wax that has melted and hardened again. The pores and hair are no longer visible and between the uneven wrinkles that make the 11-year-old look like an old woman, her skin is as smooth as plastic.

On 28 December 2008, life changed forever for Redha and her family. On that day, father Hasan, his four children and his wife were at home in the Yemeni capital, Sanaa, when gun battles broke out on the streets of their neighbourhood.

A bullet hit the apartment's gas tank, full to the brim for the cold winter months, a huge explosion set the entire flat alight, not to mention the skin of Redha and her siblings. Redha's two younger brothers and her mother were largely unscathed; she and her older brother were the worst affected.

"It was just burnt skin"

Today, father Hasan sits with his 11-year-old daughter Redha and his 12-year-old son Wessam next to the playground of the Al-Mowasah hospital in the Jordanian capital, Amman. That they are able to sit here in safety today is largely thanks to the organisation Medecins sans Frontieres, which has been running the clinic for 11 years now.

The premier clinic for reconstructive plastic surgery in the Middle East began as a project by Iraqi doctors who came across the border following the outbreak of the Iraq war, bringing their skills and some of their patients with them. "Things got up and running properly when, from 2007 onwards, the uprising of Islamist groups in Iraq reached its climax, and then several years later in countries like Libya, Syria and Yemen, when the revolutions became civil wars," explains Maria al-Fadel, media spokesperson for the hospital. Today, almost 40 per cent of hospital patients come from Iraq, closely followed by patients from Syria and Yemen. 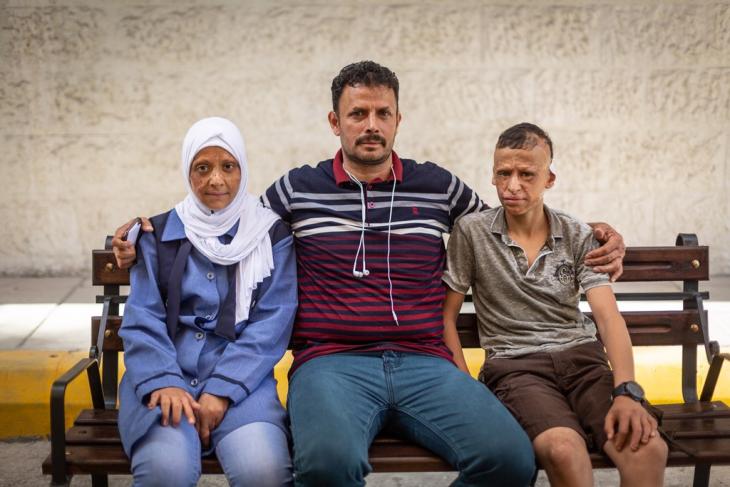 Both children have already been operated on 18 times: 11-year-old Redha and 12-year-old Wessam together with their father Hasan in front of the Mowasah Hospital in Amman, Jordan

All patients, including Hasan and his children, have to go through a selection process in their home nations, thereafter Medecins sans Frontieres arranges the necessary visas in co-operation with the Jordanian Health Ministry. Most patients stay in the hospital for an average of four to six months. Since the burned bodies and the broken bones that have grown back together wrongly because of poor treatment or amputated limbs usually require therapy lasting several years, most return here for follow-up treatment – on average three times. Everything – travel costs, treatment, medication and clinic staff – is financed exclusively by donations.

"Both my children have each undergone 18 operations so far. This is the second time we've come here, and we are very happy that we can live in safety here. And of course, that the doctors have made a normal life possible for us again," says the 41-year-old father. "After the explosion in our home, some of our own neighbours no longer wanted to shake our hands. They all thought we had an infectious disease, but it was just burnt skin."

A rest from the apocalypse

Dr. Mukhallid is one of the doctors working at the Al-Mowasah clinic. One of his patients on this Sunday morning is 14-year-old Bassam from Yemen, who has also suffered burns to his arms in an explosion. After the operation, which lasted almost two hours, the 42-year-old Iraqi sits in an adjacent room for a few minutes before the next procedure. He conducts up to five such operations each day.

The "maqama", a classical Arabic form of prose-poetry, is still almost unknown in Germany – as is the name of the 11th-century Baghdad poet Ibn Naqiya. A new translation has the ... END_OF_DOCUMENT_TOKEN_TO_BE_REPLACED

Two and a half years since its liberation from the Islamic State group, large areas of Mosul still lie in rubble. Germany is contributing in a variety of ways to the ... END_OF_DOCUMENT_TOKEN_TO_BE_REPLACED

The assassination of the Iranian general Qassem Soleimani in a surprise U.S. drone strike is being used by the Islamic Republic of Iran to political ends, says Iranian journalist ... END_OF_DOCUMENT_TOKEN_TO_BE_REPLACED

The upheavals of the past year in the MENA region are arguably as momentous as those of the Arab Spring in 2011. Yet perhaps the biggest difference is that our interest seems to ... END_OF_DOCUMENT_TOKEN_TO_BE_REPLACED

For 12 years, Nihad Salim Qoja was the mayor of Erbil, capital of the autonomous Kurdish regions of Iraq. Christopher Resch spoke to the local politician in Erbil about the future ... END_OF_DOCUMENT_TOKEN_TO_BE_REPLACED

Trump’s sweet revenge could swiftly turn bitter, after all the U.S. attack is a direct declaration of war against the Iranian Revolutionary Guard and its elite Quds troops ... END_OF_DOCUMENT_TOKEN_TO_BE_REPLACED
Author:
Philipp Breu
Date:
Mail:
Send via mail