Imprisonment and charges against lawyers in the context of their work are part of everyday life in Egypt. Al-Masry and al-Baqer were both arrested in Cairo following a wave of protests in September 2019 and were shortly afterwards subjected to flimsy accusations by Egypt’s judiciary. The regime responded to the protests with brutal force and rampant arrests – in fact it was the most comprehensive clampdown since Sisi’s takeover in 2013. In the space of a few weeks, more than 4,000 people were arrested.

Al-Baqer, Director of the Adalah Centre for Rights and Freedoms, had rushed to the interrogation of a client shortly after the protests to provide him with legal assistance, but was himself arrested on the spot and added to the very same case file. Al-Masry was arrested outside the headquarters of the notorious Supreme State Security Prosecution (SSSP) in Cairo after attending the interrogation of five detainees. Although both lawyers had no connection with the protests whatsoever, both remain in pre-trial detention. 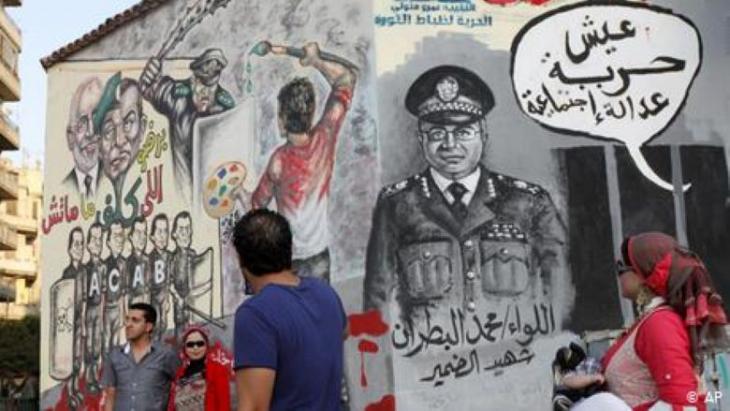 What hope freedom and social justice now? It is unclear precisely how many lawyers are currently behind bars in Egypt , or are subjected to politically motivated criminal proceedings. A joint report published in September 2020 by the International Commission of Jurists and the Tahrir Institute for Middle East Policy featured a list of 35 lawyers arrested in Egypt between March 2018 and May 2020. Only five of them have been released as of today, most of the others are still in pre-trial detention

Ziad al-Elaimy, on the other hand, was not arrested for his judicial work, but for partisan activities. The founder and spokesperson of a prominent youth coalition active at the forefront of the Egyptian revolution in 2011 was even elected to parliament in the same year, as the youngest ever MP in Egyptian history.

Prior to his election, he was involved in establishing the ESDP. In mid-2019, he tried to form a secular partisan alliance together with several other opposition parties, with the aim of running during the 2020 parliamentary elections, but was arrested after a coordination meeting in Cairo, along with several other activists and journalists. Ever since, the SSSP has accused him of terrorism.

In March 2020, al-Elaimy was sentenced to one year in prison and a fine equivalent of 1,100 euros in another case – he was accused of spreading false news in an interview with the BBC. "Ziad is imprisoned in a nine square-metre cell in Cairo’s notorious Tora prison together with another inmate. Political prisoners are often held like this, to make sure they have no exchange with other prisoners and to keep them isolated," Ziad Abdel Tawab, deputy director of the human rights organisation Cairo Institute for Human Rights Studies (CIHRS) and well informed about this case, tells Qantara.

The terrorism-related allegations against the opposition politician are particularly absurd. "In April 2020, Ziad was listed by Egyptian authorities as a terrorist. He was the first ever secular individual to be listed as such in Egypt. But many others followed ever since, including prominent activist Alaa Abdel Fattah, Haitham Mohamadeen and Palestinian-Egyptian activist Ramy Shaath," says Abdel Tawab.

Meanwhile, by granting its Human Rights Award to the seven lawyers, the CCBE is hoping to create as much public attention as possible for their cases and, thereby, increase international pressure on Egypt’s regime, the federation tells Qantara. "The objective of the CCBE is to honour distinguished lawyers and lawyers' organisations that have demonstrated outstanding commitment and sacrifice to uphold fundamental values", the federation states, additionally highlighting the difficult current situation for lawyers in Egypt and expressing the European legal profession’s support for the seven recipients.

It remains unclear precisely how many lawyers are currently behind bars in Egypt – or are subjected to politically motivated criminal proceedings. A joint report published in September 2020 by the International Commission of Jurists and the Tahrir Institute for Middle East Policy featured a list of 35 lawyers arrested in Egypt between March 2018 and May 2020. Only five of them have been released as of today, most of the others are still in pre-trial detention. The report confirms that lawyers have been increasingly targeted by authorities since Sisi's takeover and are systematically and arbitrarily arrested, detained and prosecuted for political reasons related to their work.

Alaa Abd el-Fattah, arguably Egypt’s most prominent democracy activist, has just been handed another lengthy prison sentence. Despite this, a book of his writing has recently been ... END_OF_DOCUMENT_TOKEN_TO_BE_REPLACED

People in Arab countries have been talking more openly about sex and sexuality for some time now, especially on social media. And for the first time ever, they have the vocabulary ... END_OF_DOCUMENT_TOKEN_TO_BE_REPLACED

A prominent rights group in Egypt, the Arabic Network for Human Rights, is ending operations just as the country braces for a controversial NGO law. Is this the beginning of the ... END_OF_DOCUMENT_TOKEN_TO_BE_REPLACED

Moncef Marzouki was Tunisia's first democratically elected president after the fall of dictator Ben Ali. Today he is the most prominent critic of increasingly counter- ... END_OF_DOCUMENT_TOKEN_TO_BE_REPLACED

Asef Bayat, professor of Sociology at the University of Illinois, Urbana-Champaign, has been studying revolutions and how they affect people since 1979. In his recent book, " ... END_OF_DOCUMENT_TOKEN_TO_BE_REPLACED

Every year in December, the team at Qantara.de takes a look back at the articles that proved most popular with our readers. This year is no different. Here is a run-down of the ... END_OF_DOCUMENT_TOKEN_TO_BE_REPLACED
Author:
Sofian Philip Naceur
Date:
Mail:
Send via mail

END_OF_DOCUMENT_TOKEN_TO_BE_REPLACED
Social media
and networks
Subscribe to our
newsletter