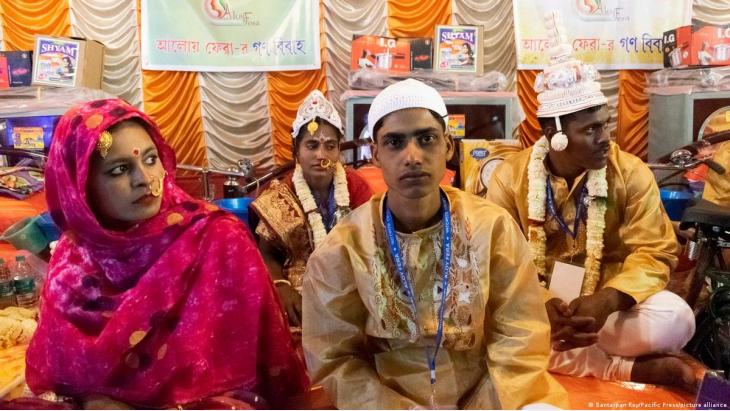 Interfaith marriages in India have been a sensitive issue for many years, with authorities and Hindu right-wing organisations disrupting weddings between Hindus and Muslims citing so-called "anti-conversion" laws.

In one incident two years ago, Indian police stopped an interfaith marriage in the northern state of Uttar Pradesh despite the consent of both families. Before the ceremony could begin, a police team intervened following a complaint by a local Hindu right-wing leader.

In India, most marriages are still arranged by families. Intercaste and interfaith marriages are looked down upon and considered taboo in many places. In extreme cases, families have attacked or even killed couples for falling in love or for trying to marry someone outside their religion.

At least eight states, including six governed by the ruling Hindu nationalist Bharatiya Janata Party (BJP), have passed anti-conversion laws banning religious conversion solely for the purpose of marriage. Last month, in the western state of Maharashtra, the government formed a 13-member panel to investigate interfaith marriages in the state and maintain a record of couples and their families.

At the same time, the Vishva Hindu Parishad (VHP), a hardline Hindu group, launched a nationwide public "awareness campaign", claiming that Hindu women are being caught up in "love jihad" and illegal religious conversions. 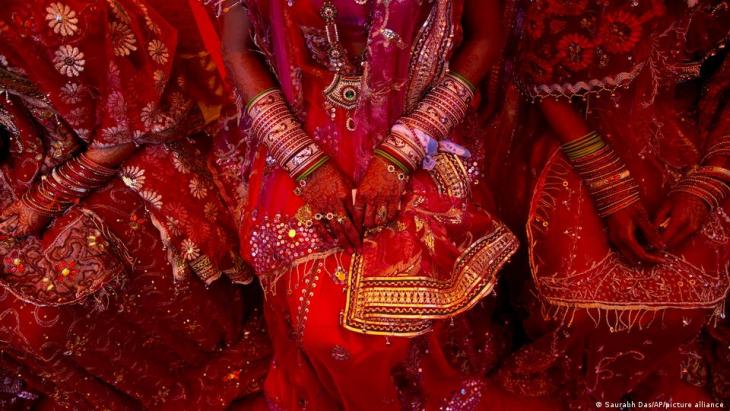 India's pluralistic society in crisis: amid heightened communal tensions in recent years, interfaith and intercaste couples in India face bullying, harassment, opposition from relatives and even death threats. Since the BJP was elected in 2014, tensions between Hindus and Muslims have become increasingly polarised. The introduction of anti-conversion laws is indicative of a rise in Hindu nationalism, say activists

"Love jihad" is a derogatory term used by the Hindu right-wing to describe an alleged phenomenon where Muslim men lure Hindu women into marriage and conversion to Islam. Hindu groups claim, without evidence, that it is an organised conspiracy.

"There is a strong need for enactment of a stringent central law to check 'love jihad' and illegal religious conversions," said Bansal.

How marriage becomes a crime

Asif Iqbal, co-founder of NGO "Dhanak of Humanity", a platform that extends help to interfaith couples, revealed that many couples live in fear of their relationships becoming a criminal offence under the current attempts at legal reform. "Prevailing legal and social situations have effectively decreased the number of interfaith marriages," Iqbal said.

"Interfaith marriage has always been challenging in India, but the discrimination and threats of violence now make the struggle to assist such couples more difficult than ever," he added.

In the last decade, the NGO has helped over 5,000 couples of different faiths, castes and communities come together. However, Iqbal said there has been a sharp decrease in the number of couples coming to seek help. "Couples have to leave their state to get married in some other state where religious marriage is not a crime," he admitted. "The police and the judiciary in many states are not ready to help couples and sometime don't offer protection."

Amid heightened communal tensions in recent years, interfaith and intercaste couples in India face bullying, harassment, opposition from relatives and even death threats. Since the BJP was elected in 2014, tensions between Hindus and Muslims have become increasingly polarised. The introduction of anti-conversion laws is indicative of a rise in Hindu nationalism, say activists.

"The laws are an intimidatory tactic against minority communities. Now, even the special marriage act registrations for interfaith marriages are a basis of harassment for young people," explained Malavika Rajkotia, a lawyer who focuses on family and property law.

India's special marriage act was enacted to validate and register interreligious and inter-caste marriages and allows two adults to marry through a civil contract. However, couples have to wait for more than a month to register their marriage, allowing time for harassment from dissenting family members and authorities.

To counter the hate and bigotry directed at interfaith couples, married couple Samar Halarnkar and Priya Ramani launched the "India Love Project" on Instagram in 2020, which rejects religious polarisation and celebrates interfaith relationships. "In a country that is increasingly criminalising interfaith love, the project became a space where differences are cherished and cheered. Honestly, it's a bubble of love, a safe space in a toxic landscape," said Ramani. 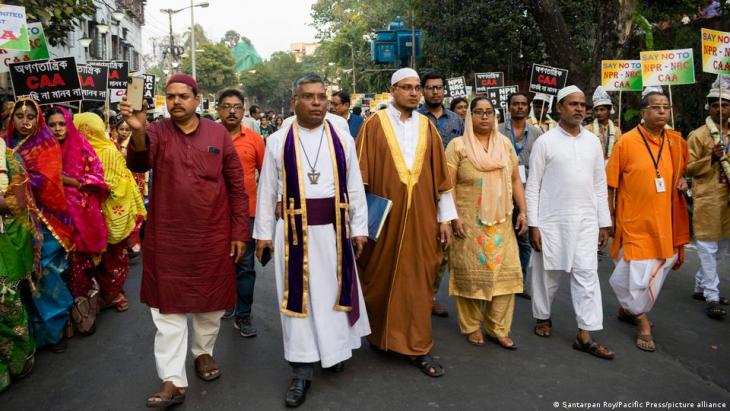 Under India's constitution, citizens have the freedom to "profess, practice and propagate" religion: Supreme Court lawyer Indira Jaising says the anti-conversion laws are liable to be challenged for violating the Indian constitutional guarantee to practice freedom of religion. "An individual actively 'adopts' another religion when choosing to marry a person from a different religion under that religion's personal law. This, too, is a freedom that is guaranteed under the constitution," Jaising explains. "Laws barring marriage through religious conversion run afoul of India's foundational value of secularism"

The right to interfaith marriage in India

According to Indira Jaising, a senior Supreme Court lawyer who has worked extensively on this issue, India has enacted specific laws in the last few years targeting interfaith marriage.

"An individual actively 'adopts' another religion when choosing to marry a person from a different religion under that religion's personal law. This, too, is a freedom that is guaranteed under the constitution," Jaising said. She added that the laws are liable to be challenged for violating the Indian constitutional guarantee to practice freedom of religion: "Laws barring marriage through religious conversion run afoul of India's foundational value of secularism."

According to the Indian Constitution, citizens have the freedom to "profess, practice and propagate" religion. The word "propagate" also includes the citizen's right to convert. Last week, the Supreme Court began hearing two public interest litigations challenging anti-conversion laws passed in several states that seek to prohibit religious conversion by marriage and make it mandatory to give notice of conversion to the state authorities.

India's ruling political party Bharatiya Janata Party (BJP) is inspired by the ideology of Rashtriya Swayamsevak Sangh (RSS). Its core philosophy revolves around the idea of a ... END_OF_DOCUMENT_TOKEN_TO_BE_REPLACED

Hindu fundamentalist Ashok Sharma has devoted his life to championing the deeds of an Indian "patriot": not revered independence hero Mahatma Gandhi, but the man who shot him dead END_OF_DOCUMENT_TOKEN_TO_BE_REPLACED

At the end of every year, the team at Qantara.de gives you a run-down of the ten most-read articles on the site over the past 12 months. Here is a quick overview of the stories ... END_OF_DOCUMENT_TOKEN_TO_BE_REPLACED

COP27 in Sharm el-Sheikh is turning into a PR disaster for Egypt’s military regime. Instead of praise for the host, the news is full of solidarity for imprisoned activist Alaa ... END_OF_DOCUMENT_TOKEN_TO_BE_REPLACED

India is projected to see an explosion in its urban population in the coming decades, but its cities already cannot cope and climate change will make living conditions harsher ... END_OF_DOCUMENT_TOKEN_TO_BE_REPLACED
Author:
Murali Krishnan
Date:
Mail:
Send via mail

END_OF_DOCUMENT_TOKEN_TO_BE_REPLACED
Social media
and networks
Subscribe to our
newsletter