Skip to main content
Historic Photographs of the Orient 1864-1970

With Camel and Camera

For decades, a unique collection of historic photographs of the Orient lay forgotten at the Hamburg Museum of Ethnology. Now, the stock of 18,000 pictures has been catalogued and made accessible to the public in the form of an exhibition. Nimet Seker reports 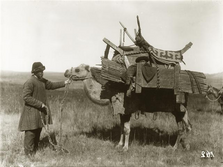 Unique and rare glimpse into the world of Kazakh nomads around 1900: on his 1899 scientific expedition Samuil Martinovič Dudin (1863–1929) travelled Kazakhstan, Russia, China and Mongolia

​​ A huge store of historic photographs from the Islamic world accumulated at the Hamburg Museum of Ethnology over generations, and although it is difficult to believe, for decades, it was entirely disregarded by museum staff.

It wasn't until 2004 that a group of scientists – with the support of the ZEIT Foundation Ebelin and Gerd Bucerius – began the process of categorizing, digitalizing and reconditioning the collection of 18,000 photographs. This was a detailed and scholarly undertaking lasting a number of years, and the results can be seen today in the form of a richly illustrated catalogue of more than 700 pages, published in conjunction with the eponymous exhibition "Mit Kamel und Kamera" (With Camera and Camel).

Most of the pictures were taken by European travelers and researchers, or by local photographers capturing images for a European and North American public. As a result, they document the European view of the "foreign". The sheer abundance and scope of the images makes this one stand out from other comparable collections.

The regions depicted in this collection range from North Africa to the Middle East, Afghanistan, Kazakhstan and even as far as China.

Fantasies of a fairytale Eastern World 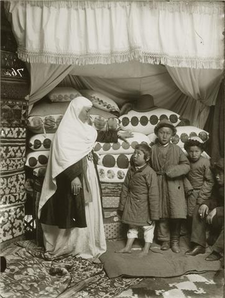 Dudun's pictures reveal a great familiarity with the region and its people, as well as a respect for those portrayed: photograph of a nomad mother with her four little boys in the family yurt

​​The content spectrum of the collection is also remarkable. For one thing, it includes commercial images created for a mostly European and North American public in the 19th century, and these reflect the western fantasies of a fairytale eastern world.

The collection also includes documentary-style images by travelers who set off on their own initiative and without commercial intentions, such as Alfred Heinicke, whom we can thank for his spectacular photographs of early 20th century Persia.

By caravan to Hadhramaut

On the other hand, there are also photographs documenting unique research expeditions to countries such as Yemen, Libya and Morocco, little-known regions at the time. Researchers traveled in large caravans through areas such as the Hadhramaut in Yemen, to draw up the first detailed maps of the territory, for example, and to create a photographic record of life there.

The fantasies of these European travelers are often recognizable in these images, fantasies that are specific to a certain region and far removed from reality, as many of the pictures from the "Holy Land" or Egypt make clear. 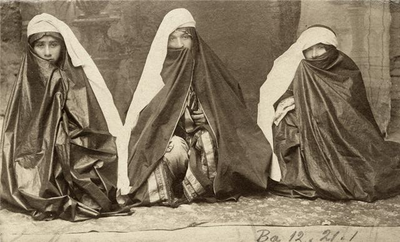 Three Persian women, anonymous photographer: for male photographers travelling the Orient around the turn of the century it was particularly difficult to take pictures of Muslim women. Often Armenian and European women served as proxy

​​But even if the pictures were not created from a neutral perspective, and constantly betray the expectations and the specific viewpoint of the photographer, they nevertheless deliver within their particular context historically valuable information on the regions and the life of people at the time – lifestyles that have since been largely eradicated by the onset of modernity and industrialization.

Two of the documented expeditions led researchers to the unfamiliar country of Yemen. The focus of geographer and geologist Carl Rathjens' expeditions in 1927 and 1938 was the life of the Jewish population in the city of Sana'a. His photographs are a striking record of a world that a short time later ceased to exist.

The pictures show that superficially at least, there was little to distinguish Yemeni Jews from the Arab population. In his expedition diaries, Rathjens wrote about the social standing of the Jews, and mentions that as craftsmen and jewelry manufacturers, their work represented the economic backbone of the region.

Pictures from the expanse of the steppe 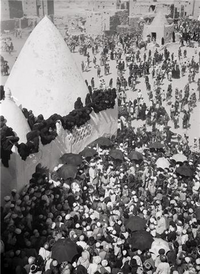 Religious ceremony in Al-Mashhad, a village in eastern Yemen. This 1939 photograph by Bettina von Wissmann-Rinaldini is among the first collection of photographs of the secluded Hadhramaut region

​​The museum collection also includes unusual photographs by Samuil M. Dudin from Semipalatinsk, now the border region between Kazakhstan, Russia, China and Mongolia. These provide a remarkable insight into the traditions of Kazakh nomads around 1900, a way of life that no longer exists in this form. Dudin's pictures are documentary in style, but the artist's viewpoint becomes clear in every shot.

The superb, melancholy pictures give an impression of the expanse and the bleakness of the steppe. Dudin does not accentuate the exotic, he does not peddle any clichés, and manages without any artificial scene-setting.

We encounter people in everyday situations: women weave mats, dismantle or put up yurts – the traditional Kazakh tents – or ride horses. The men are seen praying, playing music, hunting or working. The pictures reveal a great familiarity with the region and its people, as well as a respect for those portrayed.

Another great photographer who was quite well known in his day is Pascal Sebah, who ran a famous studio in Istanbul. The examples of Sebah's work in this collection display a customary brilliance of clarity and show the artist's drive for aesthetic perfection.

Sebah's composed shots may have attended upon European fantasies of the Oriental world, but they certainly also have great documentary worth.

Images by the Iranian-Armenian photographer Antoin Sevruguin were also found at the Hamburg museum. Sevruguin, a man who moved seamlessly between the many different realms of Persia in the outgoing 19th century, had optimal connections and access to all the social groupings, regions and ethnicities of the country.

His striking, historically fascinating pictures include photographs of men making opium, as well as of the murderer of the Iranian ruler Naser ad-Din Shah and the leader's funeral. The intimate portraits of unveiled Persian women in informal settings are especially surprising.

These photographic jewels are just some of the highlights of the rich spectrum of images in this Hamburg collection, a collection that will interest all those who wish to gain an authentic insight into the Orient of the past.

END_OF_DOCUMENT_TOKEN_TO_BE_REPLACED
Social media
and networks
Subscribe to our
newsletter