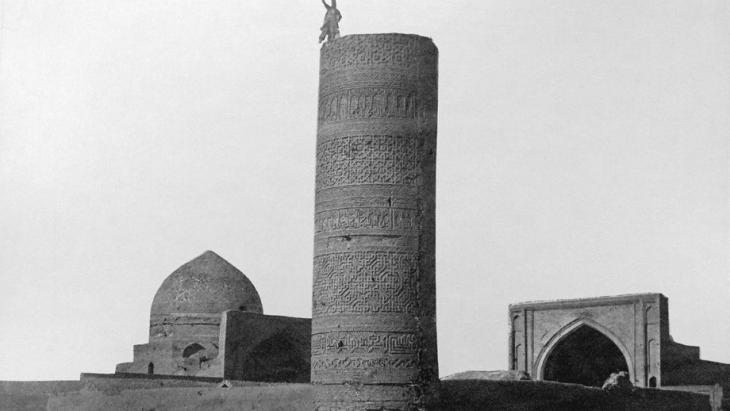 Historical photographs of Iran
Into the heart of Shia

Shia Islam is largely unknown to many people in the West. But pictures by the German photographer Hans Georg Berger taken in the centres of Shia Islam afford an unusually deep insight. By Mariam Brehmer

Oppressive, sinister, represented in the media as outlandish – even more than Sunni Islam, Shia seems strangely different to us. Black chadors, demonstrators with outstretched fists from the time of the Islamic Revolution and self-satisfied mullahs have long influenced the cliched image we have of religious life in Iran. It is an image that pushed the country into a dark corner from which it still hasn't completely emerged.

The first time the German photographer Hans Georg Berger visited a "hawza", a centre of Shia theology, he was struck by the harmony and pervasive silence he found there.

The school, as Berger writes, was "of such symmetry, of such unearthly beauty, that it took my breath away." The visit gave him an idea: from 2000 to 2005, Berger devoted himself to a photography project in which he captured life at the Koran schools in the cities of Isfahan, Qom and Mashhad. His pictures, which have now been published in a photo book called "Einsicht. Drei Reisen in die innerste Welt des schiitischen Islam" (Insight: three journeys to the innermost world of Shia Islam) draw the reader into the very heart of Shia.

Berger, who had already photographed various religious communities in other regions of the world – such as the Buddhists in Laos, took care to approach his task with the attitude of an absolute novice. The photographer has elevated his ignorance, as he writes in the foreword, into an operating principle. It allowed a dynamic relationship to develop between someone who knew nothing and those in the know, and Berger was able to use his genuine interest in the unfamiliar religion to gain the trust of the people in these religious schools, known as madrassas.

His introduction to the topic at the start of the book reveals the knowledge won by Berger through long preliminary talks with the groups of people he photographed. The portraits in the book, which show both theology students of different ages and teachers, also show that Berger always allowed himself plenty of time for his work. His subjects look relaxed, self-confident and always on a level with the photographer.

Their faces reflect their composure and concentration and often a surprising subtlety. Initial reservations about the ban on images in Islam are shattered and Berger and his students engage instead in animated conversations about art and transcendence.

Berger's book allows us to experience normal, everyday life in the hawza. A photo from a school in Qom shows mullahs studying literature while a small boy plays on the floor beside them. Other shots have been taken in orderly libraries and during sermons or theological discussions between teachers and learners – whether in the alcoves of the highly decorated Persian mosques, on rolled-out carpet mats or in the schools' gardens.

Above all, it was the status of dialogue in Shia Islam that made it possible for the Western "outsider" with the camera to win people's trust. Academic exchange and theological discussion play a central role in Shia. And allied to this is the conviction that intellectual effort can answer any question – even those regarding God and transcendence.

Berger gives an example of this from his research: even a Grand Ayatollah, who was at first deeply sceptical about photography, was eventually won over through respectful dialogue. In the end, the Ayatollah even had his photograph taken. 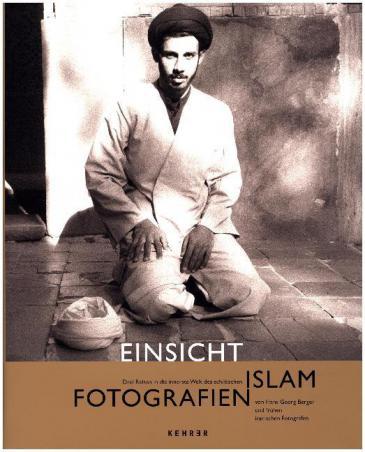 "Bergerʹs circumspect and decelerated style of photography is a breath of fresh air in the fast-paced world of photojournalism," writes Marian Brehmer. "His approach is shaped by the ability to listen with concentration and to look deeply – and it is an approach that should be cultivated today more than ever"

In this way, the photographer managed to open many doors, even those to the renowned Fayziyah Madrassa in Qom – the one-time nucleus of the 1979 Islamic Revolution. To this day, it is the most important centre of Shia doctrine. For decades, no photos were taken there, but they made an exception for Berger.

As we open ourselves up to the world to which Berger's photos give a voice, the distorted images in our minds dissolve and are replaced by another reality altogether: the long robes and turbans of the priests don't conceal irrational religious fanatics, but people who, alongside their religious studies, seek life experience, encounters and friendships. And in the end, although a there remains a certain cultural distance between us and the protagonists, there is no longer a human distance.

The art historian Boris von Brauchitsch expresses this in one of the key statements in his preface: "There is not Islam, Christianity or Buddhism; in every culture, no matter how distant or monolithic it may appear, there are above all individuals, with many different desires and needs, needs that at their very core are much less different from each other than a clutch of power strategists and religious leaders would like us to think."

There is an additional level to this book, provided by photos of Shia priests taken under the Qajar dynasty in 19th-century Iran. After the Ottomans invaded Mesopotamia in 1794, the Iranians feared that the separation of the Shia holy places from the area under Iranian rule might lead to the loss of the Shia identity.

And so, on a trip to Karbala in 1871, the Qajar king Naser al-Din Shah had photos taken of Shia pilgrimage sites and priests, which today tell us something about the continuity of Shia cultural inheritance. The juxtaposition of the historical images with Berger's photographs gives a picture of a proud, unbroken tradition of scholarship, of which little is known in the West.

Of course, there is no avoiding the role that modern contemporary history and politics plays in Berger's research, and it is also a topic of conversation between him and his subjects, though its presence never dominates. Ultimately, the great service that this book does is to take us beyond politics and help to widen the tunnel-vision we may have acquired from simplistic media narratives.

Berger's circumspect and decelerated style of photography is a breath of fresh air in the fast-paced world of photojournalism. His approach is shaped by the ability to listen with concentration and to look deeply – and it is an approach that should be cultivated today more than ever.

Iranian artist Parastou Forouhar has lived in Germany since 1991. Full of rage, just like the protesters, she hasn't yet given up on the idea of justice. By Julia Hitz END_OF_DOCUMENT_TOKEN_TO_BE_REPLACED

Unflattering terms were used at a German Football Association human rights congress aimed at "intensifying the discussion" ahead of the World Cup. One speaker in particular made ... END_OF_DOCUMENT_TOKEN_TO_BE_REPLACED

Fariduddin Attar’s "The Conference of the Birds", one of the seminal works of Islamic mysticism, has recently been published in sumptuously illustrated German translation. It ... END_OF_DOCUMENT_TOKEN_TO_BE_REPLACED

Egyptian authorities have Mada Masr in their sights once again after critical reporting. But the editor of the country's last independent news source is adamant they will continue ... END_OF_DOCUMENT_TOKEN_TO_BE_REPLACED

Like Christianity, Europe's history is one of migration. Both have strong roots in the Orient and in cultures thousands of years old. Cultural historian Bernhard Braun invites us ... END_OF_DOCUMENT_TOKEN_TO_BE_REPLACED

Comments for this article: Into the heart of Shia

END_OF_DOCUMENT_TOKEN_TO_BE_REPLACED
Social media
and networks
Subscribe to our
newsletter