In the commentary columns of the European press, Erdogan's "neo-Ottoman foreign policy" is often described as a function of domestic policy, along the lines of Erdogan fomenting abroad to distract attention from domestic problems. Or to put it another way: Erdogan wages war beyond the borders to mobilise and unite the nation behind himself and his party.

This is not the place to go into the details of the connections between Turkish domestic policy and foreign policy. In this context, however, it is interesting to note that current opinion polls indicate that Erdogan's foreign policy is currently failing to convince large segments of the Turkish population. In response to the question "How would you rate the government's foreign policy performance?" in May 2021, more than half of those surveyed gave a negative assessment: 25.2 percent said foreign policy was "very unsuccessful," while 29.5 percent voted for the "unsuccessful" rating.

On closer inspection, the high negative ratings among supporters of the MHP, the far-right coalition partner in Erdogan's government, are striking to say the least: four out of ten of the party's supporters currently consider Ankara's foreign policy to be "unsuccessful" or "very unsuccessful." Such criticism thus extends far into the party's own camp. "Foreign policy is no longer a policy field in which the AKP can expand its voter base," Can Selcuki, head of the polling institute Turkiye Raporu, comments on the demoscopic findings.

The MHP plays a key role in the current period of Turkish domestic politics. In 2018, Erdogan was already dependent on the votes of the far-right party. Recently, the president's dependence on MHP leader Devlet Bahceli has increased even further. After all, the AKP is – according to the opinion polls – far from winning an absolute majority on its own in the next elections. This applies to the vote for parliamentary seats, but of much greater political importance are the presidential elections. Here, too, Erdogan is dependent on the "loan votes" of other parties. As a result, the focus is once again on the smaller parties. They are ascribed the role of kingmakers. 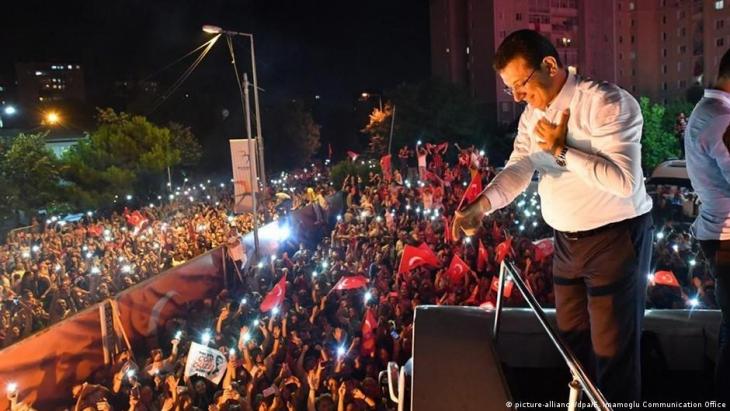 CHP politician Ekrem Imamoglu at a rally during the 2019 mayoral election in Istanbul: in these municipal elections, the opposition triumphed in the metropolises of Istanbul and Ankara, winning against government candidates in what was described as a sensational election outcome. In doing so, it destroyed the AKP's aura of invincibility, which still resonates politically to this day, writes Ronald Meinardus

Were elections to be held next Sunday

In order to increase their clout, the parties have formed "alliances"; the "People's Alliance" (Cumhur Ittifaki) includes the AKP and the MHP, while the "National Alliance" (Millet Ittifaki) includes the CHP and the IYI party. In the polls, the blocs are neck-and-neck. The moderate result for the opposition bloc is mainly due to the weakness of the social democratic CHP, which currently stands at 18 percent, five percentage points below its 2018 election result. What the alliances will look like on election day is one of the most hotly debated topics in Turkish domestic politics.

It is generally expected that two new parties that have split from the AKP (DEVA Partisi and Gelecek Partisi) will take the field against Erdogan under the umbrella of the opposition front.

In the end, the individual results of the parties count for less in Turkish politics than the results in strategically forged electoral alliances. This became very clear with the results of the 2019 local elections, when opposition candidates won victories over government candidates in what was described as a sensational election outcome. The opposition's triumphs, not least in the metropolises of Istanbul and Ankara, destroyed the AKP's aura of invincibility and continue to have a political impact to this day.

That the opposition came out on top was largely due to the stance of the pro-Kurdish HDP. In the polls, this party is currently stable at around ten percent. The HDP's stance will also play a decisive role in the coming elections. The covert power of the pro-Kurdish formation is a thorn in the side of the AKP, especially the MHP. The government wants to neutralise the party by any means necessary. An application to ban the second-largest opposition party is currently underway.

In Turkey, too, top political personnel play a decisive role in the elections. The "Sunday polls" are therefore also about the popularity of the top candidates (and currently the one female candidate). In this respect, too, things are not looking rosy for the incumbent at the moment. 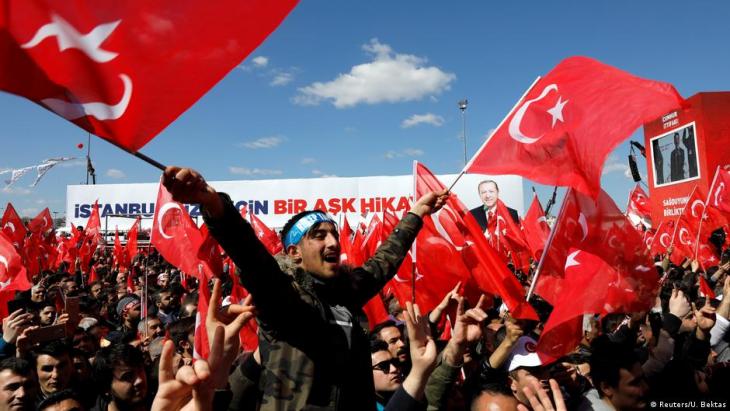 The ruling party's popularity is shrinking in the latest polls: accordingly, 17 percent of voters who voted for the AKP in 2018 "definitely" do not want to cast their ballots for the ruling party in the upcoming election. According to Turkiye Raporu, this share was only eight percent in February 2021, which shows the dynamic drop-off in support for the AKP

As in France, Turkey's presidential elections are governed by a system under which the winner must achieve an absolute majority of the votes. If the first round fails to produce an absolute majority, the top two vote-winners compete in a runoff. At present, observers are focusing less on the question of whether Erdogan will be able to win in the first attempt, as he did in 2018. This scenario is currently ruled out by the opinion polls. In polls, a growing number of voters say they will "never" vote for Erdogan. Most recently, around 50 percent of those surveyed said this – and the trend is rising.

Fitting into the picture of the ruling party's shrinking popularity is the fact that 17 percent of voters who voted for the AKP in 2018 "definitely" do not want to cast their ballots for the ruling party in the upcoming election. According to Turkiye Raporu, this share was only eight percent in February 2021, which shows the dynamic drop-off in support for the AKP.

If the pollsters are right – and the current trends consolidate – a runoff between Erdogan and an opposition candidate would be the likely scenario in the presidential election. Bad news for the incumbent: In a direct comparison – as of May 2021 – both Ankara Mayor Mansur Yavas (with 53 percent) and his Istanbul counterpart Ekrem Imamoglu (with 51 percent) are ahead in voter favour.

It is advisable to take the current mood, which plays an important role in Turkey's political debates, for what it is: political opinion polls are always only a snapshot. The failures of pollsters to accurately predict electoral behaviour are numerous, even legendary. In this respect, the many polls that see Erdogan as the loser should be treated with caution. The Turkish president has demonstrated his talent for turning situations around on a number of occasions. Nevertheless, it is noteworthy that political observers consider the loss of confidence in this phase of Turkish politics to be much more pronounced, and in some cases even irreversible.

Years ago, the International Holocaust Remembrance Alliance formulated how hatred of Jews can be recognised. Now a new definition is causing controversy. By Sarah Judith Hofmann END_OF_DOCUMENT_TOKEN_TO_BE_REPLACED

Among the 24 squads at the Euros, dozens of players with African roots will turn out in the June 11-July 11 tournament. Several of them are top names at this pan-continental event ... END_OF_DOCUMENT_TOKEN_TO_BE_REPLACED

Reading Hassan Blasim's God 99 is an immersive experience of grief and exaltation, anger and disgust, writes Marcia Lynx Qualey. We join the Iraqi narrator as he sits around in ... END_OF_DOCUMENT_TOKEN_TO_BE_REPLACED

Recep Tayyip Erdogan, disappointed by the European Union’s reluctance to integrate Turkey into its ranks, has re-directed his country’s diplomacy toward the Maghreb and Africa to ... END_OF_DOCUMENT_TOKEN_TO_BE_REPLACED

A law is currently being debated in Morocco that would legalise the cultivation and export of medicinal cannabis. For many small farmers, this would bring considerable advantages ... END_OF_DOCUMENT_TOKEN_TO_BE_REPLACED
Author:
Ronald Meinardus
Date:
Mail:
Send via mail

END_OF_DOCUMENT_TOKEN_TO_BE_REPLACED
Social media
and networks
Subscribe to our
newsletter