A Critical Test of Turkey's Commitment to Protecting Freedom of Expression

The trial of 18 people charged in connection with the murder of prominent Turkish-Armenian journalist Hrant Dink opened in Istanbul. His trial is now being seen as important test of the Turkish judiciary's independence. Dorian Jones reports 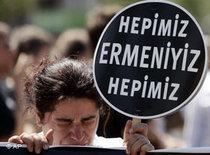 ​​In Turkey the trial of 18 people charged in connection with the murder of prominent Turkish-Armenian journalist Hrant Dink opened amid tight security in the city of Istanbul.

Last January Dink, was assassinated outside the Agos newspaper, which he edited. Dink was an outspoken supporter of human rights and his murder sparked anger and shock across Turkey. Over a 100,000 people attended his funeral in a mass outpouring of grief.

An unemployed 17 year-old youth Ogun Samast is accused of shooting Dink. The hearings were closed to the press due to him being a minor.

The opening day of the hearing drew around a 1000 people protested his murder. Some chanted, "We are all Armenians, We are all Dink". While others stood quietly paying their respects. One woman said "We are here gather to remember the loss of Hrant Dink and to say we won't forget his assassination and that is why all wearing black because we are still mourning."

While another said, "I want to see all those who committed this terrible crime punished, we won't rest until this happens." 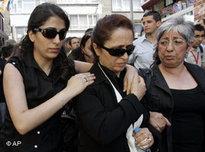 Rakel Dink, widow of the murdered journalist Hrant Dink, is escorted by her daughter Delal, left, and their family lawyer Fethiye Cetin, right, as she heads into a courthouse

​​Prosecutors claim Samast confessed to police after his capture. It is alleged he has close ties with an ultra nationalist group who consider Dink a traitor.

The slain journalist accused Turkey's then Ottoman rulers of carrying out genocide against its Armenian minority 90 years ago, the Turkish state strongly denies the charge saying the deaths occurred in a civil war. In the months leading up to murder, Dink had received numerous death threats from radical nationalist groups.

Security forces and judiciary under pressure

Along with Samast 17 other people are facing conspiracy charges in Dink's murder. Most are allegedly connected with extreme nationalist organizations, which have been linked to other murders. 2 of the defendants Yasin Hayal and Erhan Tuncel are accused of leading a local nationalist group and ordering the killing. The defendants face sentences between 7 and half years in jail and life.

Ever since Dink's murder and the public outrage over it the country's security forces and judiciary have been under intense pressure to bring all those responsible for justice. While 18 people are in court for Dink's murder, some critics say that the investigation has not gone far enough. There remain persistent allegations of links between the accused and some elements of the security forces.

After Dink was killed, video footage emerged showing Samast posing with police and the national flag after his arrest. One newspaper suggested the teenager was treated like a hero.

Before the start of the hearing Fetiye Cetin, a lawyer representing the Dink family, criticized the fact that an unnamed security official was not in the dock, - this despite the established fact that they had links with the suspects, failed in their duty, concealed evidence and even sought to vindicate the murder and the murderer.

Addressing the trial Rakel Dink, wife of Hrant Dink, made an impassioned speech to the court, in which she talked of difficulties they both faced as Armenians living in Turkey and their struggle to overcome prejudice. She strongly attacked what she called the dark forces operating in Turkey and the failure to bring to them to justice.

"For some reason, justice and judiciary cannot reach to them, do not want to reach to them. Because, they know that if they dig further they will see that this darkness exists in them also."

In a statement, Human Rights Watch said that, "The Turkish judiciary must hold accountable any security forces responsible for negligence or collusion in the murder."

The trial is being closely followed both at home and abroad being viewed as a critical test of Turkey's commitment to protecting freedom of expression. But after one day of hearing the court was adjourned to October 1st.

Obituary Hrant Dink
A Voice of Moderation and Humanity
Following the assassination of Hrant Dink, one of the most prominent voices of Turkey's shrinking Armenian community, the country is still in a state of shock. Dorian Jones, Istanbul, remembers of the courageous editor of the bilingual Turkish-Armenian weekly "Agos"

Intellectuals in Turkey
Targeted by the Nationalists
Following the assassination of journalist Hrant Dink, the lingering ultra-nationalist mood in Turkey is becoming more and more unbearable and dangerous for intellectuals. Gunnar Köhne reports from Istanbul

Press Freedom in Turkey
Journalists under Pressure
Although the number of journalists in prison in Turkey has gone down, there are still several provisions of the Turkish penal code which threaten press freedom in the country. They are a particular problem for independent and critical media. By Arian Fariborz