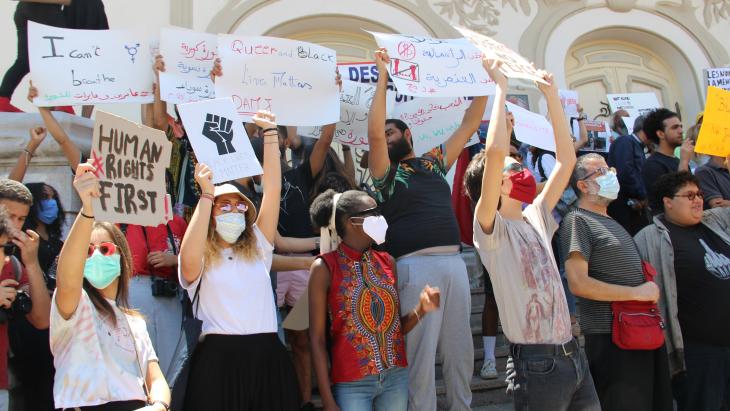 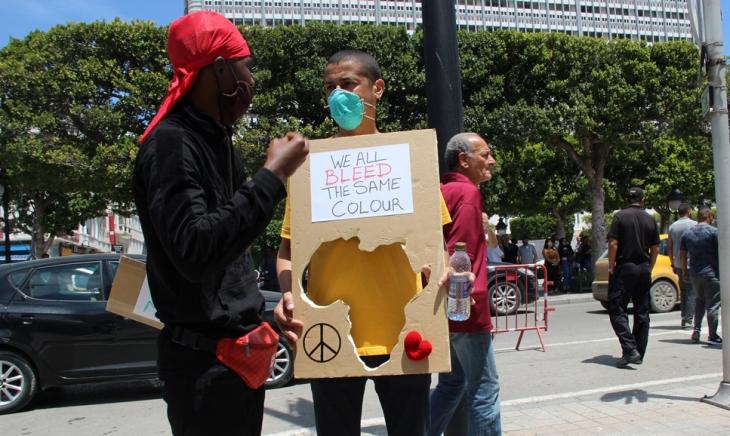 Anti-racism legislation exists in Tunisia, but what about its implementation?

The North-African country has long been a regular destination for students from sub-Saharan Africa, counting 4,200 asylum seekers and 7,000 students, according to the National Observatory for Migration. Besides experiencing verbal and physical aggression in the country, Sub-Saharan African students face institutional racism, which includes delays in obtaining visas and issues in gaining access to healthcare and jobs.

In October 2018, Tunisia became one of the first African or Arab countries to adopt a law criminalising racial discrimination. The law was passed following pressure by Tunisian civil society, most prominently by the anti-racism advocacy group Mnemty. Under the legislation, individuals using racist language, inciting hatred or making racist threats, or advocating racism can face up to three years in prison and fines of as much as $1,050.

But implementation of the anti-racism law remains slow. As of today, there has been just one court ruling in favour of a victim of discrimination. In February 2019, a woman in the city of Sfax received a suspended sentence of five months in prison for allegedly attacking – verbally and physically – a primary school teacher over the colour of his skin, after he threw her daughter out of class.

Mnemty’s coordinator noted that there has been little state progress in implementing key provisions, including the running of training and awareness sessions in the educational and media fields, as well as within the police and judiciary.

Tunisia was the first country in the Arab region to hold a demonstration in solidarity against the treatment of African Americans by police in the wake of the George Floyd tragedy.

Support for the Black Lives Matter protests in the United States has also been seen in other MENA countries, with some movements dovetailing George Floyd with their own protest motivations relating to police violence.

Meet the Syrian artists Aziz Asmar and Anis Hamdoun, who painted a mural of #GeorgeFloyd against the backdrop of #Idlib’s ruins https://t.co/yaarLPkzx3 pic.twitter.com/9t5dEAOIWx

In Israel, for instance, Palestinian and Jewish Israelis rallied following the deadly Israeli police shooting of an autistic Palestinian man, Iyad Hallak, at the end of May. Demonstrators raised signs reading 'Palestinian Lives Matter' in a clear reference to the killing of George Floyd that sparked protests in several U.S. cities.

Last week, a protest against police violence took place in Turkey where some activists carried posters of George Floyd. Moreover, in Syria’s Idlib province, artists Aziz Asmar and Anis Hamdoun recently joined the U.S. protests by painting a mural depicting Floyd’s face on the remains of a destroyed building, along with the words "I can't breathe" and "No to racism". Photos of the mural subsequently went viral on social media.

In Lebanon, anti-government protesters turned to social media in an expression of solidarity using the hashtag #Americarevolts in Arabic after protests broke out in the United States. Within 24 hours, the hashtag became the number one trending tag in Lebanon.

Moncef Marzouki was Tunisia's first democratically elected president after the fall of dictator Ben Ali. Today he is the most prominent critic of increasingly counter- ... END_OF_DOCUMENT_TOKEN_TO_BE_REPLACED

Asef Bayat, professor of Sociology at the University of Illinois, Urbana-Champaign, has been studying revolutions and how they affect people since 1979. In his recent book, " ... END_OF_DOCUMENT_TOKEN_TO_BE_REPLACED

The 2020 Beirut port blast was a traumatic experience for many people in Lebanon. A large number sought therapy in the aftermath. But, with doctors leaving the country, help is ... END_OF_DOCUMENT_TOKEN_TO_BE_REPLACED

A pandemic, civil strife and an economic meltdown have conspired to bring Beirut's vibrant club scene to its knees. Yet the city needs parties more than ever. Kate Martyr reports END_OF_DOCUMENT_TOKEN_TO_BE_REPLACED

A group of 20 social media influencers in Lebanon is seeking to de-escalate political tensions and overcome sectarian problems. Their outreach is impressive among the young and ... END_OF_DOCUMENT_TOKEN_TO_BE_REPLACED

END_OF_DOCUMENT_TOKEN_TO_BE_REPLACED
Social media
and networks
Subscribe to our
newsletter