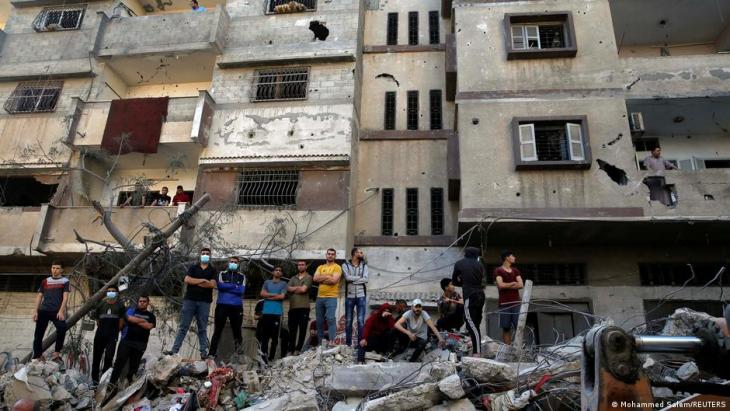 An Italian medical student on a study trip in the Palestinian territories: this documentary takes advantage of the unusual setting to shed light on the unbearable situation of Gaza’s civilian population. By Rene Wildangel

Medical student Riccardo from Siena is planning an Erasmus exchange. But he’s not looking to go to Barcelona, Krakow or Berlin. His choice of location is unusual: Gaza City. Quite apart from the fact that Erasmus only exists in E.U. member states, where it’s shorthand for a period of study abroad. Is this nothing but a clever plan to absolve some sort of intrepid adventure? Italian med student goes to Gaza, where instead of the usual parties associated with the Erasmus programme, he finds suffering, war and crisis, only return home to Italy the courageous hero?

That’s not what this film is about – luckily. This is because it doesn’t just focus on Riccardo, but also on the people he meets on his study trip: the young med students (who are all male initially, as his university, the Islamic University, operates a policy of gender segregation), his roommates, the professors and doctors – and faster than Riccardo realises, the patients too. After all, in contrast to Italy, where he can gain little practical experience until graduation, here in Gaza City, contact with patients begins very early on.

At the Islamic University, which though conservative is also regarded as the top academic institution in the Gaza Strip, Riccardo is given a warm welcome: he’s the first student to come here from Europe; it’s hoped he won’t be the last. He’s interviewed by local media and eyed with curiosity by his fellow undergraduates. A student exchange – the most normal thing in the world. But not here in Gaza – although there’s an acute need for such programmes in the narrow coastal strip with 17 universities and higher education establishments and almost 20,000 students at the Islamic University alone.

But here, people aren’t educating themselves for a career at home. Job prospects are few. It’s hoped that qualifications will prove their ticket out of Gaza. But even a foreign scholarship is no guarantee of that. It depends entirely on the whims of the Israeli occupation authorities – and the similarly restrictive policies of Egyptian authorities operating the Rafah crossing with Gaza. The Israeli human rights organisation Gisha has been observing the discriminatory limits on Palestinian freedom of movement for many years. 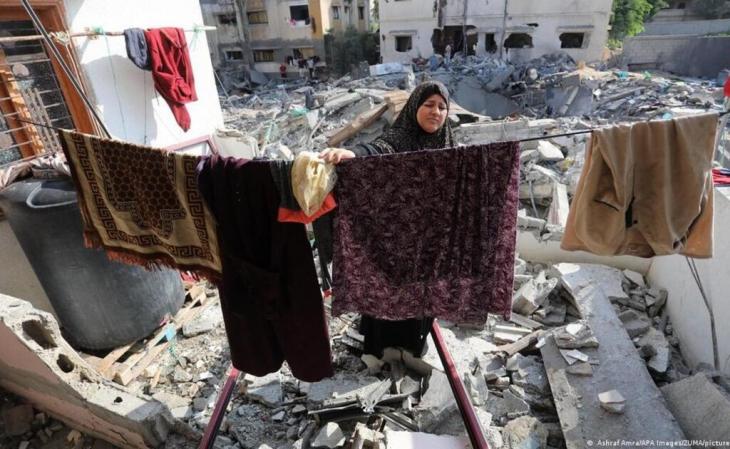 Life in Gaza: people are largely left alone with the long-term consequences, the trauma, the injuries. It’s estimated that a quarter of the population in Gaza suffer from psychological problems as a result of the sustained climate of violence. At the same time, they and their demands are frequently denied any legitimacy with reference to Hamas, which has governed the Gaza Strip since 2007. But Hamas’ many human rights violations and the movement’s authoritarian leadership style cannot justify the Israeli army’s treatment of civilians

A blend of naivety and open-mindedness

Riccardo’s flatmate and host Adam describes his burning desire to travel – although Gaza is his home and he loves the good things about it: "Getting out of Gaza means everything for my life, really. For my career, my education, it's everything really," he says. But he knows how difficult that is. At the close of the film, we discover that although he is granted a visa and a scholarship for Italy, he’s not permitted to travel.

The camera repeatedly sweeps over the narrow coastal strip, the beach and the sea, it could be a paradise. In stark contrast to the reality that confronts Riccardo. He’s intent on specialising in emergency medicine, but here in Gaza, doctors treat very different wounds to those back home in Siena: most are gunshot wounds suffered by people protesting on the border with Israel, and they attend hospital in their thousands. This is because Riccardo’s time in Gaza coincides with what’s known as the Great March of Return.

Riccardo makes no secret of the fact that everything is new and strange to him here. He arrives with a naivety that’s somewhere between having an open mind – and irresponsibility. Has he really thought things through? When the expected confrontation comes, Palestinian militants firing rockets and an Israeli bombardment in response, he goes first to the Italian cultural centre and then, for a week to Bethlehem.

As an Italian national, he’s just as privileged as all other foreign passport holders in Gaza. Unlike him, Palestinians aren’t simply able to leave the Gaza Strip when things get tough. They can’t leave at all! As Riccardo becomes aware of this injustice it weighs heavily on him. He can’t change anything. And although he sees his time in the Gaza Strip as a personal challenge and a period of self-discovery of sorts – this is more than an ego trip. His desire to be a doctor is genuine.

But the brutality he encounters in the form of terrible injuries calls his professional ambitions into question: "I'm so upset...because if I'm always going to be this troubled, it may not be bearable… all this – is it for me?" Riccardo is soon asking himself. Then, his friend Jumana, who works as an interpreter for foreign journalists, makes him an offer: she knows someone Riccardo can assist in the operating theatre. Riccardo sees his opportunity and grasps it straightaway.

As a prospective doctor, the day in theatre is particularly challenging, almost a test of courage. Is it morally acceptable to put an experienced medical student in this kind of position? But the question answers itself, as more and more patients arrive at the emergency room: all of them, without exception, have been shot in the leg by snipers. Old, young, even children. Riccardo is visibly overwhelmed, but somehow he functions. “Was I good?“ he helplessly asks the surgeon at the end of the day.

Many of the patients he encounters in the Gaza Strip are his age or younger. Some have had limbs amputated. That’s hard to see, for Riccardo and the viewers of the film – it couldn’t be further away from the classic Erasmus experience. But showing it is a good thing – because generally, Gaza only makes the news when rockets fly and bombs fall; the people are largely left alone with the long-term consequences, the trauma, the injuries. It’s estimated that a quarter of the population in Gaza suffer from psychological problems as a result of the sustained climate of violence.

Young Gazans – cut off from the rest of the world

At the same time, they and their demands are frequently denied any legitimacy with reference to Hamas, which has governed the Gaza Strip since 2007. But Hamas’ many human rights violations and the movement’s authoritarian leadership style cannot justify the Israeli army’s treatment of civilians. Over the course of the Great March of Return rallies between 2018 and 2019, Israeli snipers injured almost 8,000 people with live ammunition according to UN figures: in all more than 35,000 people were injured and more than 200 killed.

Among them journalists, medical personnel and children – this has been documented by Palestinian, Israeli and international human rights organisations as well as the United Nations. Humanitarian organisations, medical aid – at best, just a sticking plaster on a political problem. An urgent political solution, which must also include a lifting of the blockade in place since 2007, was frequently proclaimed but never realised. So, young Gazans remain cut off from the rest of the world.

After a few weeks, Riccardo starts feeling more at home in the Gaza Strip. He’s made friends, his life has structure and routine, as difficult as that might be. His antics with fellow student Sadi are a minor Internet sensation, in Gaza he’s a local celebrity. When Israeli strikes resume, Riccardo stays home, opens all the apartment windows so that no one is hit by shards of glass, and seeks shelter in the basement with his friends – everyday life in the Gaza Strip. He’s afraid, but fear isn’t the foreigner’s prerogative. Everyone is afraid – and just one street along, a house is being razed to the ground. All that remains to be done is to wait and hope for survivors. When the bombardments are over, the friends hold a party.

Then Riccardo’s study trip comes to an end and he returns to Siena. There, he writes an excellent thesis on the subject of “explosive bullets“ and begins working in an emergency room. His “coming of age” does nothing to alter the reality of life in the Gaza Strip. What did his Erasmus placement achieve? A question left hanging in the air. “Erasmus in Gaza“ is a film to be recommended; a film about individual life decisions, privileges and a young, talented generation in the Gaza Strip denied any hope for a better future.

"Erasmus in Gaza" by Chiara Avesani & Matteo Delbo. The film can be streamed online until 31 October.

A leading light of Israeli theatre, Ofir Henig has directed the Israel Festival and is the only female director to have been awarded the Israel Theatre Prize. These days, however ... END_OF_DOCUMENT_TOKEN_TO_BE_REPLACED

With the current leadership of Iran quick to lay the blame for the Iran protests on Israel, the chances of harmonious relations between the two countries still seems remote. Yet, ... END_OF_DOCUMENT_TOKEN_TO_BE_REPLACED

Daniel Barenboim is not only a world-famous pianist and conductor. He has also worked tirelessly to foster understanding and reconciliation between Palestinians and Israelis. By ... END_OF_DOCUMENT_TOKEN_TO_BE_REPLACED

After a two-year hiatus, the Arab League re-convened at the beginning of November in Algiers against a backdrop of uncertainty and discord. By Pierre Boussel END_OF_DOCUMENT_TOKEN_TO_BE_REPLACED

On 1 November, elections are set to take place in Israel for the fifth time in four years. If Arab minority voters decide to stay home out of frustration at their divided parties ... END_OF_DOCUMENT_TOKEN_TO_BE_REPLACED
Author:
René Wildangel
Date:
Mail:
Send via mail

END_OF_DOCUMENT_TOKEN_TO_BE_REPLACED
Social media
and networks
Subscribe to our
newsletter