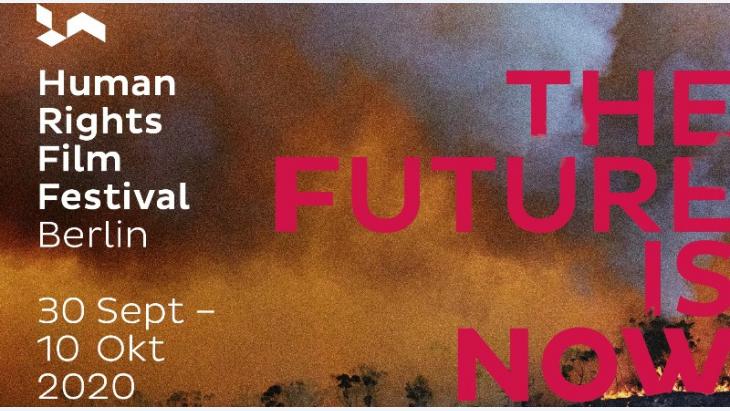 The Human Rights Film Festival Berlin has been held for the third time in 2020 under the patronage of Nadia Murad. In just a short time, this festival, which was initiated by the NGO Action Against Hunger, has evolved into a highlight in the German film calendar. By René Wildangel

As is often the case at present, this year's Human Rights Film Festival in Berlin had to take place in hybrid form, in other words with actual film screenings and discussions, but also the chance to watch the films and events online (until 20 October). One of the three main themes of this year's festival was flight and migration.

"Tiny Souls" by the Palestinian-Jordanian director Dina Naser is a portrait of a family living in the largest Jordanian refugee camp, Zaatari. While there in 2012, Naser met 11-year-old Marwa, her sister Ayah (9) and their brother Mahmoud (5). She is captivated by the confidence of the children and their joyful manner, which is in such stark contrast to the desolateness of the camp and their traumatic story. The director is reminded of stories told by her father, who experienced the expulsion from Palestine as a child.

The misery of Zaatari

When filming began in 2012, the children had just been in the camp a few months. In their Syrian village, they witnessed the destruction of their home and other acts of violence. Although everything in Zaatari is meticulously organised by the UNHCR, conditions are challenging and many things are lacking. In atmospheric shots, the film captures the volatility of the forces of nature – from heatwaves, to sandstorms and heavy rainfall – as the seemingly endless rows of tents continue to grow.

Dina Naser spent four years filming the family, from 2012 to 2016. During this time, many of those living at the Zaatari camp are frustrated and just want to leave. Some of the most desperate even consider returning to devastated Syria, although it is by no means safe to do so. A move to one of Jordan's cities – to Amman, for example – is risky and above all expensive. Marwa and her family attempt the move, but things go wrong and, despite all the adversities, they return to Zaatari.

The director had to repeatedly battle with the Jordanian government to gain access to the camp. For those times when she couldn't be there in person, she left an old camera in the camp so that the children could film themselves. The resulting footage is poignant for its carefree and casual nature. Such moments, when the children feel no pressure or responsibility, are few and far between.

Robbed of their best years

The children become teenagers, robbed of their best years in Zaatari. The future remains completely unknown. When the family actually returns to its Syrian village near Deraa in 2016, Dina Naser loses touch with them. The film ends in uncertainty, mirroring the lives of the refugees themselves. When interviewed by the festival organisers, the director said she hadn't heard anything from the family until September 2019, when she received an invitation to Marwa's wedding out of the blue.

The situation in Lebanon's Beqaa valley is similarly uncertain, but much tougher. In his film "Bitter Bread", Abbas Fahdel profiles "Camp 003". In Lebanon, refugee camps are more ad hoc in nature. Here, tents are erected on plots belonging to rich landowners who charge up to 500 dollars per pitch. Facilities are limited; the requirements imposed by authorities tough.

The profound trauma of war

Up to a dozen people live in each small tent here. Hundreds of thousands of people, primarily from northern Syria, fled war and destruction before coming here. Some intend to return, others are too afraid, but all are united by the profound trauma of towns, villages and houses being destroyed by war and violence.

Whereas documentaries in recent years have often focused on the dramatic and dangerous flight to Europe, these films capture the hopelessness of those who did not make it that far. Flight becomes the all-defining state; the families and the lives of the children growing up are marked by endless waiting and lost time.

This feeling was strikingly captured by Karim Aïnouz in his film Zentralflughafen THF (Central Airport THF) at the 2018 Berlinale. But whereas the refugees in Tempelhof waited to begin language and integration courses and to at some point get the chance to start over, the prospects here are exceedingly dim. In the midst of the beautiful landscape of the Beqaa plateau, life for refugees in extreme temperatures and rain-soaked tents is brutal. Those able to work in the fields for a few dollars count themselves lucky – even though the money is barely enough to survive. Here too, lives are in limbo, on hold for an uncertain future.

The abject horror of flight

The film "Refugee" is another retrospective appraisal of the abject horror of fleeing to Europe via the "Balkan Route". For the Alali family, the worst-case scenario takes hold when the mother undertakes the journey to Europe alone due to the father's ill-health. But when she arrives in Germany, the EU closes its borders and she is unable to fetch her husband Nazem and her two sons as planned. The family from Qamishli is severely traumatised by the violence in Syria, the horror of its escape and the desparation caused by its ongoing separation.

Here too, the father and his two children are worn down by the waiting and the uncertainty. For Nazem, the feeling that he cannot provide his children with a safe place to live is pure hell. It is one-and-a-half years before they see one another again in Greece – although an application for the family to be reunited is initially refused by the German Embassy.

The viewer only discovers the end of the story in the closing credits. This time, the ending is a happy one and the application is eventually successful. "Refugee" is a film that works with many more stylistic devices, with music and footage from various locations along the escape route. But all these dramatic devices are superfluous to requirements; the story of the Alali family is heart-wrenching enough as it is.

The individual in focus

All these documentary films profile individual people, families and above all children, who are otherwise part of the anonymous masses in what is being termed a "refugee crisis". They represent millions of individual destinies. Those responsible for their situation – in Syria and in Europe – are only hinted at.

It may sometimes seem as though everything that can be said on this subject has already been said. And yet, five years after the start of the crisis, these films are an urgent indictment of the disgraceful isolation of the EU and its inability to take in at least some of the millions of refugees from Lebanon, Jordan, Turkey and not least Greece, where they are largely forced to live in degrading conditions.

The success of the films rests on the fortitude of the profiled individuals and the trust that the filmmakers were able to build up and develop with them. They show the importance of human closeness and firm moral standpoints – as the basis of both good documentary films and a better future.

German Middle East analyst Guido Steinberg and television journalist Ulrich Tilgner have both published new books on the conflicts in the Middle East. Their analyses and their ... END_OF_DOCUMENT_TOKEN_TO_BE_REPLACED

On 7 March, Switzerland became the latest European country to vote in favour of a so-called "burka" ban. It was yet another feather in the cap of the right-wing populist Swiss ... END_OF_DOCUMENT_TOKEN_TO_BE_REPLACED

Syrian-born Rafik Schami is a gifted storyteller and one of the most successful authors writing in German today. In his 50 years in exile in Germany, he has introduced the Arab ... END_OF_DOCUMENT_TOKEN_TO_BE_REPLACED

The Syrian war has moved through many phases and included a number of changing actors. But one aspect has remained constant throughout: the Assad regime is using the conflict to ... END_OF_DOCUMENT_TOKEN_TO_BE_REPLACED

It's no secret that the Baha'i community in Iran is persecuted. Now, a document has come to light that appears to show the extent to which the repression is state-sponsored. By ... END_OF_DOCUMENT_TOKEN_TO_BE_REPLACED
Author:
René Wildangel
Date:
Mail:
Send via mail

END_OF_DOCUMENT_TOKEN_TO_BE_REPLACED
Social media
and networks
Subscribe to our
newsletter