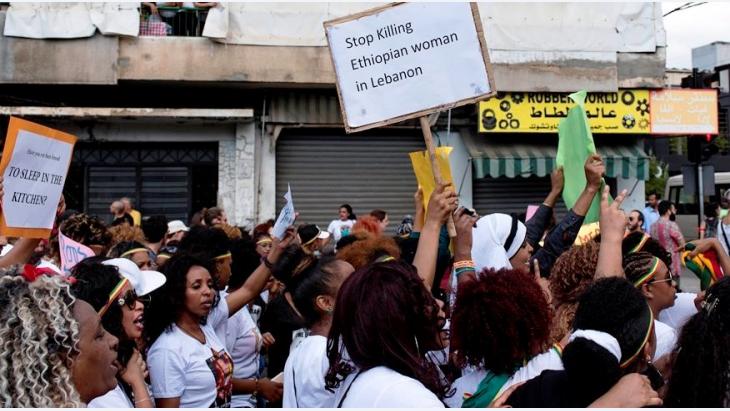 "Where is your bint from?" is not an unusual question in Lebanon. 'Bint' means girl in Arabic, but here refers to housekeepers, maids or nannies working in Lebanon under kafala sponsorship. It is a loaded term that refers to thousands of African and Asian workers arriving in Lebanon every year. By Antoine Abou-Diwan

Grace* moved to Lebanon five years ago seeking better opportunities. She was 38 years old at the time, her home country of Togo was unstable and recruiters promised her good work as a live-in maid in Beirut. Grace says she initially felt a small measure of optimism. Her salary, while low, would allow her to wire much-needed money to her family back home.

But her sense of optimism soon turned into utter terror. The "Mister" – as she was made to refer to the man of the house where she worked – beat her repeatedly and did not stop there.  Grace looks haunted as she tells her story. "I had a problem of rape," she says, staring into the distance as her expression hardens.

Desperate to escape her employerʹs cruelty and abuse, Grace ran away. Unfortunately, he had confiscated her passport as is common practice under the kafala system in Lebanon. He turned it over to the police, telling them she had run away, effectively absolving himself of any responsibility for her well-being.

Nowadays Grace is a fugitive in the eyes of the law. She is not allowed to be in Lebanon, but is unable to leave as the borders are closed. If she sought help from the authorities, she would risk getting locked up in one of Lebanonʹs notorious prisons, not knowing if she will ever see the light of day again.

Grace is just one of thousands of migrant domestic workers in Lebanon that are victims of the kafala sponsorship system, under which workers are stripped of their rights and made entirely dependent on their employers. Among other things, they are not allowed to change jobs or leave the country without their sponsorʹs permission.

Around 250,000 migrant domestic workers are employed in Lebanon under the kafala system, just like Grace was. Most hail from Ethiopia, Sri Lanka, Nepal and the Philippines.

The kafala system originated in the Gulf States and was introduced in Lebanon following the civil war. In Lebanon, domestic work is unregulated, excluded from the labour law that guarantees the rights of most other actors in the labour market. This has given rise to the treatment of migrant domestic workers as property. Their legal and residential status is fully in the hands of their employers/sponsors, making them vulnerable to exploitation and abuse.

Reports of abuse are so common that Ethiopia, Nepal and the Philippines have banned their citizens from travelling to Lebanon for work. However, the Lebanese government has not been preventing those nationals from entering the country. Except in the most outrageous cases, the Lebanese media turns a blind eye.

Francis*, a Sudanese working in south Lebanon, recalls the story of a maid from Ghana who was abused by her employer for three years and never received her full salary. Someone from the local church helped her out with food and eventually convinced her employer to pay for her plane ticket back home.

Francis is also aware of a maid from Kenya, who has been in Lebanon since 2016 and is beaten regularly by her employer. Forced to sleep in the kitchen, she is not even granted a decent place to rest. "The kafala system is modern slavery," Francis concludes.

Grace lives in the shadows. "If I talk to the police, I will be arrested," she says. "I donʹt have a residency permit." What is more, without a work permit, which she can only get through a sponsor, she cannot work legally. Nowadays she cleans the houses of four families and shares an apartment outside of Beirut.

Home
Print
Newsletter
More on this topic
Lebanon ARM (Anti-Racist Movement)Interview with Lebanese film director Nadine Labaki: "Children are the first to pay for our wars"Social inequality in the Arab world: There is no state in Lebanon
Related Topics
Human rights, Migration, Racism | discrimination, Sexism and violence against women, Slavery, Women in the Islamic world
All Topics

Philosopher Juergen Habermas was due to be awarded a major Arab prize in Abu Dhabi, but has turned it down following criticism. This decision torpedoes Arab efforts at a ... END_OF_DOCUMENT_TOKEN_TO_BE_REPLACED

In his book "Ground Zero: 9/11 und die Geburt der Gegenwart" (Ground Zero: 9/11 and the Birth of the Present) Islamic scholar Stefan Weidner analyses the consequences of the ... END_OF_DOCUMENT_TOKEN_TO_BE_REPLACED

As Qatar prepares to host the 2022 FIFA World Cup, the country has come under fire for its treatment of migrant workers, with some nations calling for a boycott of the contest. ... END_OF_DOCUMENT_TOKEN_TO_BE_REPLACED

German Middle East analyst Guido Steinberg and television journalist Ulrich Tilgner have both published new books on the conflicts in the Middle East. Their analyses and their ... END_OF_DOCUMENT_TOKEN_TO_BE_REPLACED

Televised Turkish dramas are all the rage in the Middle East. A young Ottoman TV Empire has been expanding its soft power by harnessing regional dialects, Arabic names and viewers ... END_OF_DOCUMENT_TOKEN_TO_BE_REPLACED
Author:
Antoine Abou-Diwan
Date:
Mail:
Send via mail

END_OF_DOCUMENT_TOKEN_TO_BE_REPLACED
Social media
and networks
Subscribe to our
newsletter