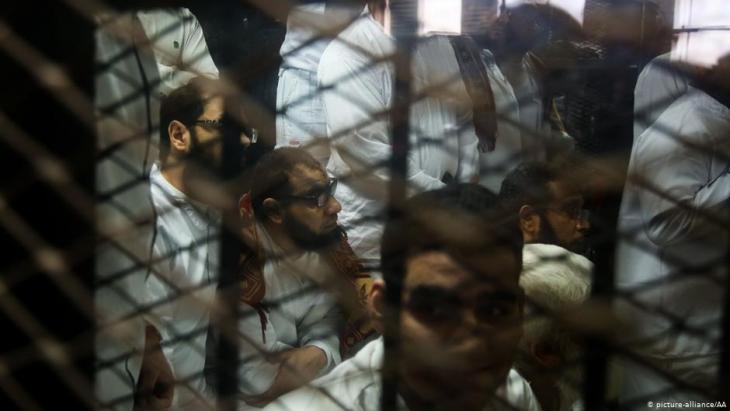 Ten years after the Tahrir square protests in Cairo, Egypt’s human rights record is disastrous. On the occasion of the anniversary of the 2011 revolution, several international campaigns are calling for the release of imprisoned activists. By Sofian Philip Naceur

Violent, authoritarian and extremely paranoid: since his bloody takeover in 2013, Egypt’s President Abdul Fattah al-Sisi has restored a regime whose brutality far outstrips even the reign of long-term ruler Hosni Mubarak. Hopes for real political and social change after the mass uprising that forced Mubarak out of office after 30 years in power have faded away, leaving a disillusionment that is omnipresent.

Countless people who, before and after the 2011 revolt, campaigned in various ways for “bread, freedom and social justice” in Egypt, are today intimidated and politically inactive, or have fled the country to live in exile. Tens of thousands, however, remain imprisoned in Egypt for political reasons, paying a hefty price for their activism and courage.

Unsurprisingly, Egyptian opposition figures are using the current media attention around the tenth anniversary of the “25 January Revolution” to highlight the fate of those currently in prison for their political engagement. Some have been sentenced to heavy jail terms, while others are subjected to pre-trial detention lasting years by the Egyptian security forces and the country's judiciary. European opposition politicians are also participating in corresponding campaigns.

Ten years since the #Jan25 revolution in #Egypt, scores of activists and #humanrights defenders remain unjustly detained. All of this week, we will share their names and ask you to take action and call for their freedom.
Share! Retweet! Let @AlsisiOfficial know you care. pic.twitter.com/Q2qzXOKmR3

Solidarity with those who resist

Eight politicians from Germany's left-wing party – Die Linke – have signed a solidarity statement calling for the immediate release of all political detainees, which explicitly highlights the fate of six detained leftist activists, journalists and trade unionists. According to the statement published on the anniversary of the revolution, Egyptian leftists were the ones who carried the confrontations with the regime into factories and workplaces in 2011. “Their efforts contributed to organising strikes which ultimately forced Hosni Mubarak to resign.”

Since Sisi’s takeover, fundamental civil liberties have been suspended and tens of thousands of people imprisoned for political reasons, the statement highlights. This includes Islamists, liberals, leftists, trade unionists, media professionals and human rights defenders. “Independent trade unions and youth organisations have been dismantled” and torture in Egyptian police stations remains widespread on a daily basis.

Although the campaign specifically highlights six individual cases, it expresses solidarity not only with Egyptian leftists, but with all those “who are resisting Sisi’s dictatorship”. In addition to journalist Hishem Fouad, who advocated for striking workers and independent trade unions long before 2011, the German politicians are also calling for the release of novelist Ayman Abdel Moati, lawyer and trade union activist Haitham Mohamadeen and trade unionist Khalil Rizk. All four are detained on flimsy, terrorism-related charges.

Also on the list are Patrick George Zaki, an employee of the human rights organization Egyptian Initiative for Personal Rights, who was tortured in police custody after his arrest in early 2020, and prominent left-wing human rights lawyer Mahienour al-Masry.

The socialist al-Masry from Alexandria is one of the icons of Egypt’s revolutionary youth and, as a politically engaged lawyer, extensively defended imprisoned activists of all political persuasions, as well as trade unionists and refugees. Sisi’s repression has proved unable to intimidate her, despite the fact that she has been repeatedly sentenced to prison terms since 2011. Most recently, al-Masry was arrested in autumn 2019, after she attended the interrogation of several arrested protesters. She, too, is facing terrorism-related charges.

The campaign launched by German Left Party deputy Christine Buchholz is by no means the only ongoing campaign calling for the release of political prisoners in Egypt. There are countless similar campaigns right now, journalist and activist of the Revolutionary Socialists, Hossam El-Hamalawy, tells Qantara.de.

“There is no unified centralised campaign right now. This is not because of a mistake of the activists, but simply because there are so many political detainees in Egypt today”, Hamalawy says. “There is also a campaign in the UK among trade unionists and leftist activists trying to secure signatures and rally MPs and trade unions, in solidarity with the socialist detainees, in particular, but all political prisoners in general.”

Germany – one of Sisi’s most important allies

The campaign in Germany may have been small so far, but it nevertheless carries political weight, the journalist says. “Germany is one of Sisi’s main allies. Egypt is one of the world’s biggest buyers of German arms and weapons and Egypt’s police is trained by German police officers. Hence, anything that happens in Germany strongly echoes in Egypt”, Hamalawy, who is directly involved in the solidarity campaign, emphasises.

Although the campaign explicitly calls for the release of all political prisoners, regardless of their political orientation, it highlights six cases of imprisoned socialists. As far as Hamalawy can tell, one reason for this is that socialist activists have frequently been overlooked by the campaigns of recent years. “We know that Sisi is not going to release all political prisoners any time soon, but at least we are trying to secure the release of some of them”, the activists say.

An end of reprisals against the opposition, activists and independent trade unions is, however, not in sight in Egypt. The reasons for this are obvious. “Sisi’s regime is counter-revolutionary and extremely paranoid, so it is lashing out against any prospect of dissent or threat to its rule”, Hamalawy says. “Any form of collective action, any structure that can sustain a mobilisation and any venue that can channel the efforts of Egyptians into some form of collective action; Sisi will crack down upon it, whether these are independent trade unions, Islamist organizations or left-wing parties. Sisi’s regime is extremely paranoid and its appetite for repression knows no end”, according to Hamalawy.

Meanwhile, the campaign by German left-wing politicians, in response to Sisi’s reprisals against the labour movement, has coincided with a wave of strikes and protests in Egypt’s steel industry. Due to heavy losses, the government plans to liquidate the state-owned Egyptian Iron and Steel Company, although unionists have made concrete proposals for corporate reform. Around 7,500 jobs are at stake. According to the Egyptian online media outlet Mada Masr, some 4,000 workers occupied company headquarters in Helwan, south of Cairo, in mid-January, calling on the company management and the government to negotiate.

10 years of revolution: Alaa Al Aswany on Egypt – "The Republic of False Truths"

The West and the Islamic world – The despotic temptation

In this unusually beautiful book of images and text, published in German and Arabic, artist Marianne Manda presents her own unique take on the megacity of Cairo. In over fifty ... END_OF_DOCUMENT_TOKEN_TO_BE_REPLACED

A stage, lights, a mesmerised audience: it looks like an Egyptian folkloric concert, but Umm Sameh is singing to heal the sick by driving out the demons that possess them END_OF_DOCUMENT_TOKEN_TO_BE_REPLACED

Russia's ranking on the World Press Freedom Index has fallen again over the Kremlin's wartime censorship of the Ukraine conflict. From Myanmar to Mexico, journalists continue to ... END_OF_DOCUMENT_TOKEN_TO_BE_REPLACED

From the Euphrates to the Mekong, dams that ensure one country's water supply risk leaving others parched. But shared water resources can be a source of peace as well as conflict ... END_OF_DOCUMENT_TOKEN_TO_BE_REPLACED

END_OF_DOCUMENT_TOKEN_TO_BE_REPLACED
Social media
and networks
Subscribe to our
newsletter