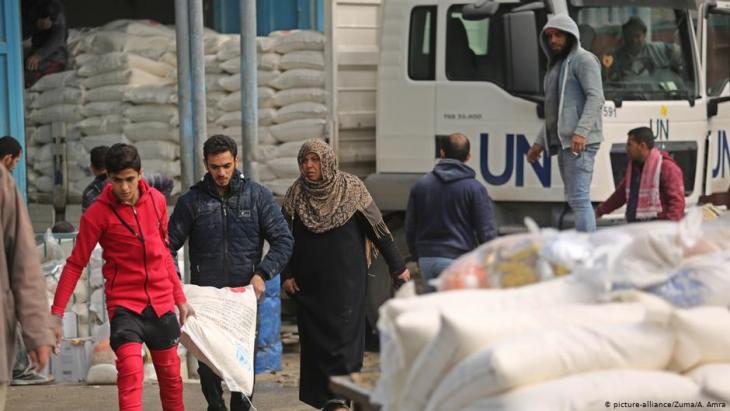 Financial woes had been part and parcel of UNRWA's work for years. In 2018, however, President Donald Trump dealt the organisation a deadly blow, deferring payment of U.S. yearly contributions of more than $300 million. Now the United Nations Relief and Works Agency for Palestine Refugees is facing insolvency. Financial aid for millions of refugees is at risk. By Kersten Knipp

Time is running out fast. Thousands of jobs could be lost if the financial situation of the United Nations Relief and Works Agency for Palestine Refugees in the Near East doesn't improve promptly, says Philippe Lazzarini, the organisation's commissioner-general.

"Our financial resources are at their lowest level in years. We really hope the situation improves and we're doing all we can to keep UNRWA up and running. However, without the funds that we've calculated we need, we won't be able to provide our services. Obviously we're doing what we can to avoid that situation."

According to Lazzarini, a financial shortfall of $70 million (€59 million) looms for the months of November and December, which means employees' salaries could be affected and might have to be pushed back into next year. Most of them are refugees themselves.

In dire need of help

As part of its remit, UNRWA supports Palestinian refugees in the Gaza Strip, East Jerusalem and the West Bank, as well as in Lebanon and Jordan.

The Gaza Strip is expected to be hit hardest by the impending default of payments. UNRWA is the biggest employer there with around 13,000 people on its books. The economy is already in free fall, with unemployment at over 50%. "The people here really depend on international aid," says Lazzarini.

The situation isn't much better in Lebanon, home to some 174,000 Palestinian refugees. Access to the labour market is limited. For months now, the country has been experiencing the worst economic crisis since the civil war ended in 1990.

The devastating explosion in Beirut in August has exacerbated the situation, and while the local population is struggling to make ends meet, it's even more difficult for the refugees. Around 90% of them depend on UNRWA's support. On top of that there are around 1.5 million Syrian refugees in Lebanon who are also in dire need of help.

UNRWA relies almost exclusively on voluntary financial contributions from UN member states, as well as from the EU. However, the organisation, which was been in operation since 1950 and is now one of the biggest UN agencies, says that support has not kept pace with the rising demand for UNRWA's services.

Those requirements have grown exponentially with the increasing number of registered refugees, growing poverty and the worsening crises in Syria, Lebanon and Gaza. As a result, UNRWA's budget has been chronically underfunded for years.

The organisation has been through tough times recently. Last November, former Commissioner-General Pierre Krahenbuhl was forced to step down following complaints about his leadership style and allegations of mismanagement.

At the time the Al Jazeera news network ran reports about internal complaints against Krahenbuhl and other UNRWA executives, who allegedly exploited their positions for personal gain and suppressed dissenting views and opinions within the organisation. However, an inquiry didn't reveal that Krahenbuhl was involved in any scams or had embezzled funds.

Will the situation improve under Joe Biden?

Financial woes have been part and parcel of UNRWA's work for years. In 2018, President Donald Trump deferred payment of U.S. yearly contributions of more than $300 million, taking umbrage generally with UN resolution 302, which pertains to the establishment of UNRWA, and specifically with resolution 194. Under that resolution, Palestinians are guaranteed the right to return to their home country – an issue that has long been a thorn in the side of both Israel and the Trump administration.

All eyes and hopes are now on President-elect Joe Biden. "First indications are that there is a willingness to revive the partnership between the U.S. and UNRWA," Lazzarini says. In the meantime, efforts are underway to urge donors to provide compensation for imminent short falls. "Currently our ability to continue our work is in jeopardy," Lazzarini added.

In this essay, renowned Lebanese journalist and writer Hazem Saghieh asks whether the Arab Levant, which stretches from Iraq in the east to Egypt in the west, will remain an ... END_OF_DOCUMENT_TOKEN_TO_BE_REPLACED

With his fist bump greeting for a man he previously called a pariah, US President Biden has paved the way for Saudi Crown Prince Mohammed bin Salman's return to the international ... END_OF_DOCUMENT_TOKEN_TO_BE_REPLACED

The murder of a female student at Mansoura University in the Nile Delta has sparked a long overdue debate on femicide in Egypt. Karim El-Gawhary reports from Cairo END_OF_DOCUMENT_TOKEN_TO_BE_REPLACED

When times are tough, the exchange of ideas and perspectives becomes especially important. It takes dialogue. And at Deutsche Welle, we need distributors and cooperative partners ... END_OF_DOCUMENT_TOKEN_TO_BE_REPLACED

Women in the Levant have long used needlework to depict the region’s history, its landscapes, customs and traditions. Intricately embroidered panels, varying in style, colour and ... END_OF_DOCUMENT_TOKEN_TO_BE_REPLACED

A straightforward message emerged from last week’s meeting in the Negev desert of the foreign ministers of four Arab countries, Israel and the United States: Israel is key to the ... END_OF_DOCUMENT_TOKEN_TO_BE_REPLACED
Author:
Kersten Knipp
Date:
Mail:
Send via mail

END_OF_DOCUMENT_TOKEN_TO_BE_REPLACED
Social media
and networks
Subscribe to our
newsletter