Is it permissible to make jokes about the Prophet Mohammed? Has the increasing politicisation of Islam had an effect on humour in the Arab world? Just two of the questions discussed at a conference on humour held recently in Berlin. Antje Bauer went along for a laugh 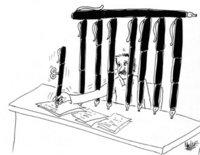 ​​Some years ago, Driss Ksikes, chief editor of the French Moroccan weekly journal Tel Quel, decided to publish a dossier of Moroccan jokes on the taboo topics of politics, sex and religion. The dossier duly appeared, and nothing untoward happened. But last year, Driss Ksikes, by then chief editor of the Arabic language Moroccan weekly Nichane decided to repeat the experiment.

This time, however, he found himself at the centre of a storm of Islamist protest, even receiving an indignant email protest from distant Oman, while the public prosecutor's office brought an action against him for blasphemy.

According to Ksikes, the joke that caused most of the trouble went as follows: Abu Huraira, one of the tradition bearers of the Prophet's narrations, arrives in heaven. He expects to be welcomed into Paradise, but when the name list is checked there is no mention of him. Furious, he demands that the Prophet Mohammed be sent for. When Mohammed arrives, he says: ‘Oh, there must be some mistake.' But after searching through the list, he apologises, but says he cannot help. He then goes off, returning some time later in the company of God and surprises Abu Huraira with the words: "Smile, you've just appeared on 'Candid Camera'."

The joke dossier brought Ksikes a three year suspended jail sentence and caused him to resign his editorial job in protest.

The Berlin conference participants were unanimous in their opinion that humour is a staple of classic Arab literature, and not only in the form of subtle irony, the joke too, they maintain, has a strong tradition.

"The victim may be anyone from the refuse collector to the wine merchant, the entire spectrum of urban occupations providing likely targets, and in particular, of course, any authorities or circumstances that clash with current conceptions of morality," explained Ulrich Marzolph, Professor of Islamic Studies from the University of Goettingen. Thomas Bauer from the Wissenschaftskolleg (science college) Berlin told an 8th century joke about self-appointed prophets who were often made targets of derision among the populace.

"During the days of the Caliph Mamun there was a woman who claimed that she was a prophet. A judge asked her if she believed in the Word of Mohammed, to which she replied: "Yes, I do!" The judge responded by reminding her that Mohammed had said that there would be no more prophets after him. "Of course," she replied, "but he didn't say that there wouldn't be a prophetess!"

The subject of how far one is permitted to go with religious jokes was one that came up time and again during the conference, unsurprisingly, given the furore over episodes such as the Mohammed cartoons or the fatwa against Salman Rushdie. It soon became apparent, however, that there was no consensus on this.

The Western "culture of ridicule"

Classic Arab literature does not shy away from making fun of even the Prophet Mohammed or the Koran, claimed Professor Marzolph. Thomas Bauer and some others, however, were of the opinion that even during periods of greater tolerance than we are experiencing today, core areas of Islam were viewed as off limits to humour.

Religious jokes have become a much more sensitive topic almost everywhere nowadays. Just why this should be the case was something that tended to be dealt with only marginally with speculation touching upon everything from an increasingly conservative tendency in the Islamic world, to the defensive reaction that has resulted from the Islamic world's perception of their having been encircled by the West, to the reminder that there is a difference between an irreverent joke told in a Bedouin tent and one smeared across the pages of the Internet for all to see.

And it could also be that our view of the Arab world has changed, as Islamic Studies Professor Gudrun Krämer from Berlin reminded us: "We have a sarcastic culture now, one that thrives on ridicule, and does not stop at blasphemy. It is a culture that offends the religious, who, in most Western societies, are just expected to accept it. In Muslim societies today this is not the case at all. What they are saying is: we cannot accept this; it must be punished."

The varieties of regional humour

A lot was said about religion and, as a result, the political joke was almost entirely forgotten about, although it, too, is subject to the tide of politics for the breadth or narrowness of its licence and the joke, or what is seen as funny, varies from country to country.

Whilst in Egypt there is nothing to beat a good bit of sarcasm, the Gulf States are rather more reserved in this respect. Lebanon is one of the most liberal countries in the Arab world and, as one might expect, the joke is very much alive and well, although humour there is less about self-irony than about ridiculing one's political opponents, as Sarah Binay of the German Oriental Institute in Beirut pointed out. However, here the mockery at least serves to help overcome adversity.

Binay gave a recent example: "The summer war of 2006 provided a whole crop of new jokes. One of these was about Shiite leader Hassan Nasrallah and the fact that after the Israeli attack millions of Shiite refugees were forced to flee from southern Lebanon to Beirut where they had to be put up in makeshift accommodation in schools. The joke goes: "Why is Nasrallah going to be awarded the Nobel Prize for Education? Because in two days he was able to get two million people into schools."

Cartoons from the Maghreb
Cunning, Clever, Critical
Cartoons hold up the mirror to society. In the Arab world as well, cartoons are a popular medium for criticizing the government and society. Liesel Schulze-Meyer reports on an exhibit of Maghreb cartoons shown last year in Berlin, organized by the Friedrich Ebert Foundation and the German-Maghreb Society

Popular Culture in Indonesia
Comic Heyday!
Indonesia's comic scene is in a golden age. Control and censorship are a thing of the past, and comic artists are developing distinctly Indonesian forms of expression. Yet the industry remains marginal and plagued by self-doubt. Laine Berman reports