Skip to main content
Humour in the Islamic World

Digging at the Despots

Since the terrorist attacks of 11 September 2001 and the cartoon controversy, few West Europeans connect the Arab world with humour and irony. Yet, Islamic culture can in no way be considered a humour-free zone. Andrea Lueg reports 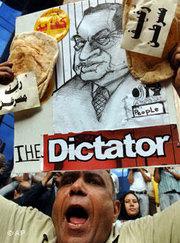 Satire as a byproduct of authoritarian rule: Egyption protestor with cartoon of president Hosni Mubarak

​​ It is an unusual sight for many when the Pakistani comedian Shazia Mirza stands on stage in London with a black headscarf and otherwise chastely dressed. First of all, she is a woman, and wearing a headscarf at that. And then, she makes jokes about Islam. Humour, derision, and satire in Islamic culture? That sounds almost like a paradox in Western ears.

In an age of terrorist attacks and the cartoon controversy, at a time when Islam is mostly presented in the media in the form of indignant mullahs and veiled women, those in the West often forget that there is also laughter behind the veil and that there has probably never been a society in which authoritarian rulers or censors have managed to completely eliminate humour.

Attacked by fundamentalists and from the state

In fact, it is exactly authoritarian regimes, like the ones that currently predominate much of the Arab world, that have always produced the sharpest satirists and most biting deriders. Yet, even today, those who engage political or religious humour risk imprisonment or even death.

The Moroccan journalist Driss Ksikes got to find out personally how the rulers of his country react to unwelcome humour. After publishing a long series of Moroccan jokes in his magazine, Ksikes was not only attacked by fundamentalists, but also from the state, which subsequently shut down his magazine. A court case was instigated against him for his role as publisher and Ksikes was condemned to three years in prison. The sentence was later commuted.

​​ Driss Ksikes' homeland of Morocco is actually regarded as relatively liberal among the Arab states. Nowadays, however, it is impossible to tell whether something will be taken as an insult by some people, says the journalist.

An end to the funny business

It is not easy for many in the West to laugh at Arabic jokes, because they know too little about the political situation, influential personalities, the religion, and society as a whole. On the other hand, Muslims can be easily offended when those in the West laugh at Islam. The Islamic scholar Thomas Bauer at the Berlin Institute for Advanced Study attributes this to a number of factors:

"Muslims haven't given up on humour, but it is just that they find themselves in a political situation that doesn't exactly invite humour," says Bauer. "They want to present their own position as decisive, firm, and solid, because they feel that they are in a defensive position. This goes back to colonial times and continues to this day. And in such a defensive position, they don't want Islamic basic values to be questioned in a humorous way, and certainly not from the outside."

Through a historical lens, however, humour in Arabic culture amounts to a massive treasure. A standard work of literature that has received more notice in Europe than in the Arab world is the collection of tales from 1001 Nights.

The Oriental scholar Claudia Ott has newly translated the stories and thereby liberated them from all Western projections. A different sort of humour is found in 1001 Nights than in everyday jokes. "The 1001 Nights is a book full of humour – in the general structure of the work, whereby the cruelty of the sultan who chops off the head of a woman each night is exposed through stories and, in the end, subdued."

Oriental scholar Claudia Ott: "The 1001 Nights is a book full of humour"

​​ Arabic culture can point to an unbelievably immense treasure house of humorous literature. Much of it, though, can no longer be printed in Arab countries without coming into conflict with the censor. However, back in the classical period of Arabic literature, says the Islamic scholar Thomas Bauer, there was considerably greater freedom as to what one could write and publish than today – even with respect to religious topics.

"Of course there were taboos. You are not allowed to make fun of the Prophet or the Koran, but the holy text could be used in a satirical manner. But the limits during this classical period were set extremely wide.

Bauer claims there were no sexual taboos at the time. "Only since the colonial period has the Islamic world adopted a kind of Victorian Puritanism. In contrast to the past, the topic of sexuality is now almost completely taboo."

According to the Islamic scholar Ulrich Marzolph, the perception of the Arab world in the West is extremely limited. Economic and political aspects tend to dominate the picture, while culture hardly plays a role at all. He thinks it is time not only to become more aware of the common roots of Arab-Islamic and European culture, but also to define our attitudes towards these roots.

"It is clear from various sources that Arab jokes have been incorporated in the European tradition," Marzolph says. "Important sources are, for example, the preachers that travelled to the Middle East during the Crusades and returned with cultural material, as well as merchants that were in direct contact with the Levant."

Whether or not the West wants to admit it, people will continue to joke and laugh within Arabic culture – even when it demands a great deal of courage for those living in authoritarian states.

Interview with Fatih Cevikkollu
Life in Stand-by Mode
An increasing number of young German-born Turks are exploring their origins and identity as stand-up comedians and finding a large public in the process. Fatih Cevikkollu is one of them. Petra Tabeling met up with him

END_OF_DOCUMENT_TOKEN_TO_BE_REPLACED
Social media
and networks
Subscribe to our
newsletter