Humour in the West Bank
"I Laugh, Therefore I Am"

Despite The Israeli-Palestinian conflict, Palestinians have developed a popular culture of self-deprecating political jokes. The French filmmaker Vanessa Rousselot has travelled the West Bank, trying to capture the spirit of Palestinian humour and found that jokes may tell more about a political climate than TV news ever do. Interview by Stephanie Dötzer 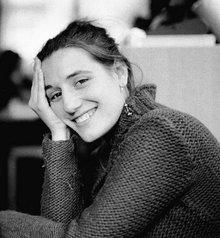 "The cliché of the grim-looking fanatic who feels offended at the slightest criticism is nonsense. Many of the alleged 'taboo subjects' aren't taboo at all," Vanessa Rousselot says

​​You've made a road-movie about Palestinian jokes, but I guess the first thought is: What's left to laugh about in Ramallah or Rafah?

Vanessa Rousselot: Well, more than I used to think. When I first moved to Palestine in 2005, I was mentally prepared to meet people who constantly talk about their suffering. Instead, I met people who don't talk like victims and who don't want to be seen like that. And then, on one of my first evenings in Bethlehem, when people would spend hours exchanging jokes, I thought: This is it! It's an obvious subject! But it took another four years to finish the film.

Four years in which the situation in the Palestinian territories changed dramatically...

Rousselot: Yes, it's much worse now. I shot the first jokes in 2006, right after the elections. Back then, it was very easy to find people who were happy to tell all kinds of jokes in the street. People were in a hopeful mood. When I came back in 2009 and 2010, it was completely different. Some people were so frustrated they said: "You want to hear jokes? Our entire life is a joke!" And others were worried that a joke might get them into trouble and preferred not to talk at all. That kind of fear didn't exist four years ago.

What kind of humour did you find in that situation? Was it pessimistic?

Rousselot: Yes, it's a bit like: Ok, it doesn't look like we'll have a state anytime soon, so instead of crying about it, we may just as well start telling jokes. One of the classics goes like this: "On judgement day, all peoples of the world arrive at the gates of heaven and hell. The Germans, the British, the Japanese... Everybody is being placed depending on what they did during their lives, 50% go to heaven, 50% to hell. Then, when it's the Palestinian's turn, Archangel Gabriel goes through his list and says... hum, Palestinians? Sorry, you're not on our list. He goes to see God and asks: What are we supposed to do with them? There's no space left. And God says: Oh well, just give them a couple of tents, set up a refugee camp and we'll figure something out in the future."

That feeling of having been forgotten by the rest of the world seems to have had an impact...

​​Rousselot: Definitely. But there are also many other types of jokes. Like a whole series on Hamas, poking fun at their religious fervour. Or about the divisions between religious communities. I also noticed lots of jokes about extra-marital affairs – of both, men and women. To cut a long story short: There's just about everything. My Arabic teacher used to say: "I laugh, therefore I am."

Jokes about religion and infidelity? In the West, Arabs aren't known for their sense of humour these days.

Rousselot: The cliché of the grim-looking fanatic who feels offended at the slightest criticism is nonsense. Many of the alleged 'taboo subjects' aren't taboo at all. You know, there is one series of jokes about gay men from Nablus who take advantage of a stupid guy from Hebron...

The Hebronites seem to be for the Palestinians what the Belgians are for the French...

Rousselot: Yes, but do you notice the difference? We French joke about the others, never about ourselves. The Palestinians make fun of themselves and to me, there's nothing more powerful than that. When I was filming at 4 a.m. at Qalandiya checkpoint with people who'd been waiting for hours, I didn't hear anyone complaining. But if you collect vox-pops in Paris you get the impression that the plight of the Parisians must be far worse than that of the Palestinians.

Is there any subject where even the most cheerful Palestinian would stop making jokes?

Rousselot: The settlers! There's nothing to speculate about and nothing to hope for. And so there are no jokes about settlers. Except one that I've heard in Hebron: It's about a Jewish settler who speaks Hebrew with a heavy Hebronite intonation, so the point is: See, the settlers took everything – even the accent.

It sounds as if one could retell the whole history of the Palestinian issue in terms of jokes. 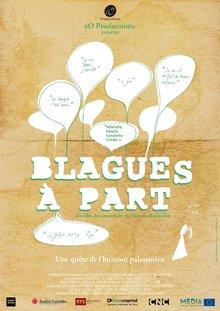 "Many Europeans expect Palestinians to have a lot of anti-Semitic jokes. I didn't come across a single one." French film poster of (No) Laughing Matter

​​Rousselot: Absolutely. There's a Palestinian anthropologist, Sharif Kanaana, who's been collecting Palestinian jokes since the first intifada. By now, he's got more than 2000 jokes on index cards, classified according to political themes and historical situations, such as "Oslo" or "Gulf war". According to him, jokes in Palestine are a barometer of hope. The more hopeful people are, the more they joke. But when the future seems bleak, they run out of jokes. When I last saw Sharif in 2009, he said: "You know, for the very first time, I have not found a single new joke in six month. I collect jokes since 1987, and I've never encountered such a lack of jokes. Palestine is drying out of jokes."

One should think that the Israelis provide a permanent source of inspiration...?

Rousselot: They actually hardly appear at all. Palestinians from the territories are cut off from the world, many hardly ever leave their village. They live in a very small world and people tend to laugh about what is part of their everyday life: In Gaza, they laugh about Hamas, in the West Bank, they laugh about the checkpoints – but Israeli civilians are not part of the picture. These are the kind of jokes you'd find among Arabs living inside Israel. By the way: Many Europeans expect Palestinians to have a lot of anti-Semitic jokes. I didn't come across a single one. Palestinians joke about Israeli soldiers, about politicians, but not about Jews.

Talking about Jews, do you see any parallels between Palestinian humour and Jewish humour?

Rousselot: I'd say that the capacity to poke fun at oneself is definitely a point they have in common, but I don't know enough about it to be able to judge. What I do know is that Palestinians and Israelis have a lot of jokes in common. Right from the beginning, when I showed my footage to Israeli friends, they often said: Hey, I know this one! We have it in Hebrew!

How about really sensitive issues such as terrorism or Islamic extremism? I find it quite striking that there are virtually no jokes about that in the Western world. It seems inappropriate to laugh about terrorists... or maybe for Westerners, the subject is both too alien and too scary to come up with jokes.

Rousselot: Yes – even though jokes could help to cope with those issues! This one, for instance: "A Palestinian from Hebron went to a training camp abroad to learn how to fire rockets. When he comes back home, everybody says: So, show us what you've learnt! Can you teach us how to fire rockets on Tel Aviv? Sure, he says, and everybody helps preparing the rocket. The fire it... and ... boooom!... the rocket comes down about 200 meters from his house and demolishes an entire neighbourhood. An old man climbs over the rubble of his house and exclaims: My God! If it's like that at our place, what must it be like in Tel Aviv!?"

Er... have you ever tried this joke in Tel Aviv?

Rousselot: Well, for the first couple of sentences, my Israeli friends were holding their breath. At first, the joke confirms all their worst expectations: "See, they only think about killing us". But then, when they notice that this guy is too stupid to understand that the rocket does nothing except destroying his own village... then they burst out laughing! They suddenly notice that the joke is not making fun of Israelis, but of the Palestinians themselves. I don't want to stretch it, but I had the impression that it inspired a bit of respect. It would be nice if some would think: Hey, somebody who comes up with jokes like that may have a critical mind. Maybe that's a person to talk to.

Would you say that people actually joke more in times of political conflict?

Rousselot: Yes, even though I do think there's a limit to laughter in acute war situations. But otherwise, as long as there's some normalcy, I guess the reason is very simple: If you're stuck at home because of a curfew and the electricity cuts all the time, what are you going to do? Well, you tell jokes. It's for free and it helps.

Mohamed Sifaoui's "Bin Laden Unveiled"
A Comic Book Assassination of al-Qaida
Mohamed Sifaoui, an Algerian journalist and considered expert on radical Islamic ideologies, attempts to tackle radical Islamists and their message of terror by using humour as his weapon – and amply makes use of anti-Islamic clichés. By Joseph Croitoru

END_OF_DOCUMENT_TOKEN_TO_BE_REPLACED
Social media
and networks
Subscribe to our
newsletter