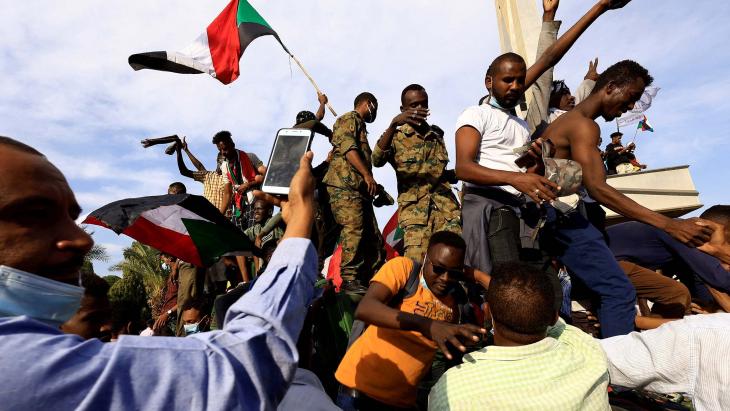 Hundreds of thousands of people marched to the presidential palace in Sudan's capital Khartoum on Sunday in protest at the October 25 military coup, drawing volleys of tear gas and stun grenades from security forces, Reuters witnesses said.

Some protesters managed to reach the gates of the palace and the protest's organisers called on more to join a planned sit-in there after sundown, but live video footage showed those who remained being tear gassed heavily.

The outpouring of protest, the ninth major demonstration since the coup and one of the largest, marked the 2018 burning of a ruling party building which touched off a popular uprising that led to the overthrow of long-ruling Islamist autocrat Omar al-Bashir.

Protests against the coup have continued even after the re-instatement of the prime minister last month, with demonstrators demanding no more military involvement at all in government in a transition towards free elections.

Demonstrators marched down a main road leading to the palace, chanting "the people are stronger and retreat is impossible", with some darting into side streets to dodge volleys of tear gas.

Some 123 people were injured, according to the Sudanese health ministry, in Khartoum, its twin cities of Bahri and Omdurman, and the eastern city of Kassala.

Medics affiliated with the protest movement accused security forces in a statement of using live bullets and heavy tear gas to disperse the sit-in, assaulting protesters and stealing their personal property. They also accused them of encircling hospitals and firing tear gas at the entrances.

There was no immediate statement from police.

Despite security forces blocking bridges over the Nile river into the capital early on Sunday, protesters were able to cross a bridge connecting the city of Omdurman to central Khartoum but were met with heavy tear gas, witnesses said.

Witnesses also watched protesters crossing a bridge from Bahri, north of Khartoum, to the capital.

Early on Sunday joint army and paramilitary Rapid Support Forces sealed off major roads leading to the airport and the army headquarters and they were heavily deployed around the presidential palace.

Protesters also blocked roads leading to the main route of the march. Some were carrying Sudanese flags and photos of protesters who were killed in demonstrations in the past few months. Others were handing out masks against COVID-19 and carrying stretchers in anticipation of people being wounded.

The Central Committee of Sudanese Doctors says 45 people have been killed in crackdowns on protesters since the October 25 coup.

It was the ninth in a series of demonstrations against the coup, which have continued even after the military signed a deal on 21 November with Hamdok, who had been under house arrest, and released him and other high-profile political detainees.

On Saturday night, Prime Minister Abdalla Hamdok warned in a statement that Sudan's revolution faced a major setback and that political intransigence from all sides threatened the country's unity and stability.

The military and civilian political parties known as the Forces of Freedom and Change Coalition (FFC) had shared power since Bashir's removal. But the agreement reinstating Hamdok angered protesters, who previously had seen him as a symbol of resistance to military rule and denounced his deal with the military as a betrayal.

Civilian parties, and neighbourhood resistance committees that have organised several mass protests, demand full civilian rule under the slogan "no negotiation, no partnership, no legitimacy."

In a statement, the FFC supported the resistance committees' calls for sit-ins, strikes, and further protests, which are scheduled for 25 December and 30 December.

"We call on the people to continue escalating their resistance to the coup until power is handed over to the people," they said, accusing security forces of excessive force.

On Saturday night and early Sunday morning, people arrived in bus convoys from other states, including North Kordofan and Gezira, to join the protests in Khartoum, witnesses said.    (Reuters)

More on this topic
Sudan's coup puppetmasters: The UAE – pulling Sudanese stringsMilitary coup in Sudan: Is the Arab Spring about to die in Khartoum?Following the coup in Sudan: "The world is right to be worried"
Home
Print
Newsletter
MoreAll Topics

END_OF_DOCUMENT_TOKEN_TO_BE_REPLACED
Social media
and networks
Subscribe to our
newsletter