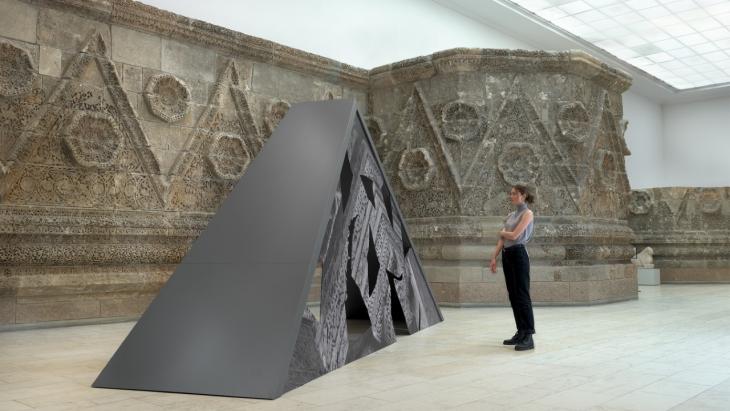 "I am a stranger: a stranger twice over"
Contemporary art meets early Islamic high culture

Running until 20 February 2022, Ali Kaaf’s installation "Ich bin Fremder. Zweifach Fremder" will be on show in front of the largest and perhaps most significant piece of Islamic art to grace any museum worldwide. In exhibiting his piece in this way, Kaaf draws it into a contemporary dialogue with the 1,300-year-old facade

A striking installation by the German-Syrian artist Ali Kaaf has been on display in the Mshatta Hall at the Museum of Islamic Art in Berlin since 1 December 2021. Kaaf uses his intervention piece, triangular and rich in symbolism, to lend a contemporary artist’s perspective to the building’s changing history, before the Mshatta Facade is dismantled, restored, and displayed at the renovated Pergamon Museum in 2026.

Ali Kaaf: The title comes from a poem by the philosopher and poet Abu Hayyan al-Tawhidi, who lived in Baghdad in the 10th century. From his perspective and at the time he was alive, to be a stranger meant, first and foremost, voluntarily separating oneself from society so as to achieve contemplative silence. According to the Gnostics and Islamic Sufis, it also indicated an estrangement from the self in the attempt to attain spiritual union with the world.

For me, the Mshatta Facade mirrors my own fate, migrating and arriving in a new culture, where that arrival is never complete.

How did this partnership with the Museum of Islamic Art in Berlin come about?

Kaaf: I had an involved conversation with Dr Stefan Weber, Director of the Museum of Islamic Art, when he visited my studio. We discussed the influence of Byzantine art on early Islamic art. We also discussed the Mshatta Facade, on display at the Pergamon Museum, which is an impressive example of this hybridity; the idea for my intervention gradually developed out of that. I was also working with the knowledge that the Mshatta Facade was to be dismantled in the spring of 2022 so that it could then be put on display in another room in the renovated Pergamon Museum in 2026.

With its specific use of shapes such as cuts, holes and spaces, Kaaf’s artistic intervention opens up its very own perspective on the ornamentation of the Mshatta Facade: “I use perspectives on and glimpses of the monumental Mshatta Facade to build an area of tension which creates a space of ambivalence in the place in between, between facade and intervention, history and present, familiar and strange, visible and invisible”

With its specific use of shapes such as cuts, holes and spaces, Kaaf’s artistic intervention opens up its very own perspective on the ornamentation of the Mshatta Facade: “I use perspectives on and glimpses of the monumental Mshatta Facade to build an area of tension which creates a space of ambivalence in the place in between, between facade and intervention, history and present, familiar and strange, visible and invisible.”

What kind of place is the Pergamon Museum from your perspective? What does the Islamic Art Collection mean for you and your work?

Kaaf: I’ve lived in Berlin for over 20 years. During that time, the Pergamon Museum has become a place that I visit regularly – not just because of the imposing and impressive objects on display, but because of its unique museum concept, the way spaces are presented within the space.

What do you think about, and what do you feel, when you see the Mshatta Facade?

Kaaf: It sparks memories from my childhood. I grew up in Damascus, but my family and I spent a lot of time in southern Syria, which is home to many ruins, as well as ancient Roman and Byzantine cities of various sizes. Looking back, I think of us playing next to those ruins as children. They were part of nature, part of life in that place. The original site of the Mshatta Facade was just 200 kilometres from where we stayed. The first time I saw it shut off in a room in the museum in Berlin, the facade seemed like it had been estranged from its surroundings.

At the same time, it’s precisely this feeling that fascinates me: seeing a monumental architectural object, which once encompassed a whole space, contained within a single room. 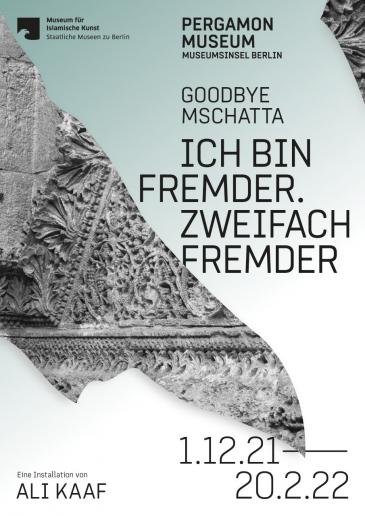 Running until 20 February 2022, Ali Kaaf’s installation "Ich bin Fremder. Zweifach Fremder" is on display directly in front of the largest and perhaps most significant piece of Islamic art found in a museum anywhere in the world. Kaaf’s work enters into an intimate dialogue with the famous early Islamic building fragment. With its specific use of shapes such as cuts, holes, and spaces, Kaaf’s artistic intervention opens up an entirely unique perspective on the ornamentation of the Mshatta Facade

How do you capture different aspects in your installation – in terms of space, position and shape?

Ali Kaaf: There’s a second layer which touches on the principle of pars pro toto. As enormous as the facade seems when you enter the hall in the museum, it was once part of a much larger building in Jordan. In front of it, a kind of puzzle made up of knowledge, ideas, and questions of perception develops. I singled out the triangle as the decorative facade’s essential, symbolic element and present it in front of the facade as the metaphorical ‘tip of the iceberg’.

My interest in space within the space is also essential here. Through my installation, thus placed within a new context, the Mshatta Facade undergoes an extended perception of space. The triangle positioned in front of the facade becomes a doorway, connecting both past and present, early Islamic culture and Christian culture. Looking through the delicate front side of my work, a new perspective on the space emerges, inspired by the sensitive separation of inside and outside thanks to the window grates present in Islamic culture. I use the perspectives on and glimpses of the monumental Mshatta Facade to build an area of tension which creates a space of ambivalence in between, between facade and intervention, history and present, familiar and strange, visible and invisible.

In your view, what is the tangible relationship between your 2021 work "Ich bin Fremder. Zweifach Fremder" and the Mshatta Facade, which was built in the eighth century?

Ali Kaaf: It is in their fragmented natures – the process of losing one’s roots, migration and the change of cultural surroundings. My installation is an embodiment of questions associated with these themes. As an artist, I’m interested in fragments. My artwork is part of and a basis for a comprehensive artwork which takes inspiration from the facade itself, which again is part of a whole.

How does "Ich bin Fremder. Zweifach Fremder" differ from your previous work?

Ali Kaaf: One difference is the physical experience of the installation within the space, in relation to an object which already exists. There is a specific artistic connection to my sculptures and my series of photo collages titled The Byzantine Corner which I have worked on intensively in recent years. In these works, I try to embody the graphic layer and the photographic layer, both space and design. The radical cuts were necessary for me to create a magical space. This installation enabled me to try these elements out within a space on a new scale, one which required intensive modelling and projections in order to develop a correct concept of the space.

German-Syrian artist Ali Kaaf, born in Algeria, lives and works in Berlin. He completed studies in Visual Arts at the Lebanese Academy of Fine Arts in Beirut before studying at the University of Arts in Berlin under the mentorship of Rebecca Horn and Marwan Kassab Bachi. His work moves playfully between Arabic and European visual traditions. His work has appeared in collections worldwide via numerous exhibitions and residences. In 2020, Kaaf was awarded the stipend for the Federal Foreign Office’s AArtist in Residence programme.

Algeria‘s regime is again cracking down on anti-fracking activists and the unemployed in the country‘s south. Yet EU countries remain keen to scale up their energy cooperation ... END_OF_DOCUMENT_TOKEN_TO_BE_REPLACED

Bachtyar Ali sends the hero of his latest novel – "Mein Onkel den der Wind mitnahm" – literally flying. Jamshid is so thin after his years as a political prisoner that a gust of ... END_OF_DOCUMENT_TOKEN_TO_BE_REPLACED

For a century, the Kurds and other minorities in Turkey have been subject to state repression. With his dissertation "The Kurdish Question in Turkey", political analyst Ismail ... END_OF_DOCUMENT_TOKEN_TO_BE_REPLACED

Anti-Semitic motifs have no place at Germany’s documenta art show or anywhere else in the world, stresses Meron Mendel, director of the Anne Frank Educational Centre in Frankfurt ... END_OF_DOCUMENT_TOKEN_TO_BE_REPLACED

A new exhibition, "Syria – Against Forgetting", at Cologne’s Rautenstrauch-Joest-Museum focuses on Syria's artistic and cultural heritage and pays tribute to the country before ... END_OF_DOCUMENT_TOKEN_TO_BE_REPLACED
Author:
Magdalena Heinrich
Date:
Mail:
Send via mail

END_OF_DOCUMENT_TOKEN_TO_BE_REPLACED
Social media
and networks
Subscribe to our
newsletter