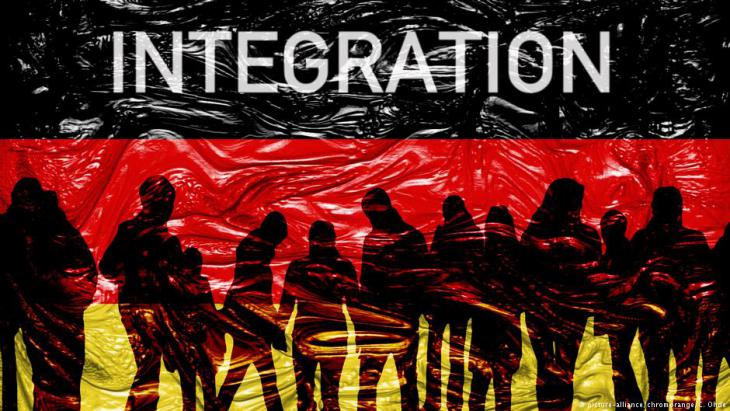 Immigration
Integration "made in Germany"

Successful integration, a new German trademark? While chaos appears to reign at the Federal Office for Refugees, daily life for migrants is better than many might assume. A look at positive trends. By Astrid Prange

Praise has been forthcoming – from Canada, of all places. The British-Canadian bestselling author and migration expert Doug Saunders attests to Germany’s success on the question of integration. Saunders is the author of the bestseller "Arrival City". In his reportage, he describes the mass migration of people from rural to urban areas and outlines the impact of this movement in the U.S., China, France, Britain, Turkey and Germany.

For Saunders, model cities of integration, dubbed "arrival cities", are cities where migrants find work and are able to set up a new home, or in other words arrive. In Germany, such places include the Berlin districts of Neukolln, Wedding and Kreuzberg and the city of Offenbach In Hesse. In his view, the latter, with the highest proportion of foreigners in Germany (37 percent) fulfils the four criteria that enable successful integration: proximity to jobs and education, affordable housing and functioning networks.

The largest waves of migration described by Doug Saunders are also part of Germany’s most recent history. Firstly, following the end of the Second World War, millions of displaced people arrived in western Germany, followed by millions of guest workers.

Then, in the 1990s, the Balkan wars triggered a huge movement of refugees. And after the dissolution of the Soviet Union, millions of emigrants came to Germany. A new migration wave came in 2004 in the course of eastwards EU expansion. And finally in 2015, Germany opened its doors to almost one million refugees.

Immigration country Germany: according to the Central Register of Foreigners (AZR), some 10.6 million foreign nationals were resident in Germany in 2017. Of the country’s total population of 82 million, some 18.6 million people have a migrant background.

But how far is the path from "Arrival City" Offenbach to "Arrival Country" Germany? A look at the official statistics shows that despite all its apparent problems and deficits, integration in Germany has often progressed further than most might assume.  Evidence of this positive trend was provided back in 2015 by the "Migrant Integration Policy Index" study. Here are five areas where progress has been achieved.

Education: between 2005 and 2016, young migrants have made up for their shortfall in the area of academic education. While just 13.9 percent of 25- to 35-year-olds graduated from university or technical colleges in 2005, the German Statistical Office says this number climbed to 26 percent in 2016.

There is also progress in school-based education. According to the official integration report, the number of children with a migrant family background attaining an Abitur or advanced school-leaving certificate rose from nine percent (2010) to 17 percent (2015). Some 44 percent attained intermediate-level qualifications in 2015, up six percent on 2010.

Employment: the jobless rate is also declining among the migrant population. The proportion of those out of work with a migrant background fell from 17.9 percent in the year 2005 to 7.1 percent in the year 2016. But this figure is still considerably higher than among the indigenous German population. Within this group, the jobless rate decreased from 9.8 to 3.4 percent over the same period. 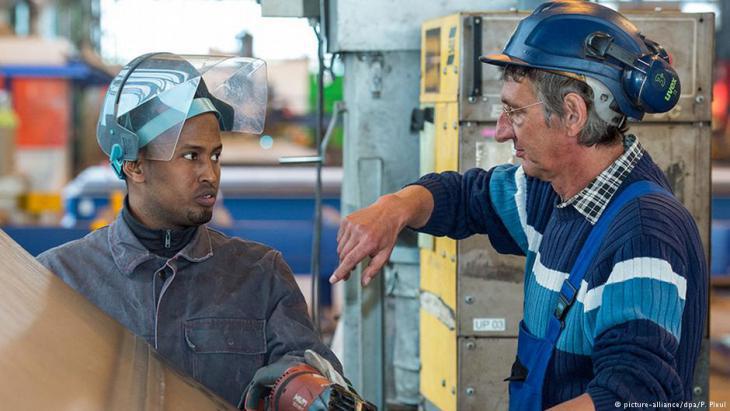 Job prospects and training opportunities for refugees in Germany: Hamza Ahmed from Somalia works for a company that produces steel components for wind turbines

There have been some positive developments among asylum seekers too. According to figures from the Federal Labour Office, 216,000 refugees – or in other words one in every four arriving in Germany from war- and crisis-torn countries since 2015 – are now in jobs that require the payment of statutory welfare contributions. These statistics do not take into account those in part-time jobs.

The Institute for Employment Research (IAB) estimates that 100,000 refugees will enter the German labour market during the course of this year alone. But it is however also true to say that the number of welfare recipients among Arab and African refugees is still very high. Just under one million rely on benefits.

Political participation: of a total of 709 deputies in the new German parliament, the media service provider Mediendienst Integration says 58 have a migrant family background, which represents a share of 8.2 percent. In 2013, this share was 5.9 percent, and just 3.4 percent in the Bundestag elected in 2009. Despite the fact that the political participation of migrants is perpetually on the rise – they continue to be under-represented politically.

Sport: karatekas, cricketers, soccer players – the integration work of German sports associations is highly successful and funded using public money. One of the best-known projects is the "1:0 für ein Willkommen" (1:0 For a Welcome) initiative launched by the German Football Association (DFB). The results are plain to see: more than 40,000 refugees are now members of a soccer team. The German Olympic Sports Federation (DOSB) also receives public funding for its long-term programme "Integration through sport".

Dalia Hatuqa is an experienced journalist who has reported on the Israeli-Palestinian conflict from Ramallah, Washington DC and Amman. A writer for Time Magazine, Foreign Affairs ... END_OF_DOCUMENT_TOKEN_TO_BE_REPLACED

Since President Abdul Fattah al-Sisi seized power in Egypt in 2013, he has ruled the country with an iron fist. Civil society, opposition and free press struggle to survive. Tens ... END_OF_DOCUMENT_TOKEN_TO_BE_REPLACED

Many Turks are dissatisfied with the international status of their country. At the same time, opinion polls reveal great scepticism among the Turkish population towards the USA. ... END_OF_DOCUMENT_TOKEN_TO_BE_REPLACED

The German government is planning to legalise cannabis before the end of this legislative period. So what does Islam have to say about its consumption? Will changing the law alter ... END_OF_DOCUMENT_TOKEN_TO_BE_REPLACED

In his latest book, Navid Kermani poses questions about God. It feels like no one could have done it better. His writing elicits smiles, doubt and wonder. By Melanie Christina Mohr END_OF_DOCUMENT_TOKEN_TO_BE_REPLACED
Author:
Astrid Prange
Date:
Mail:
Send via mail

END_OF_DOCUMENT_TOKEN_TO_BE_REPLACED
Social media
and networks
Subscribe to our
newsletter