In her documentary film "Import-Export" Eren Önsöz looks at the 500-year-old relations between Turkey and Germany. She takes the audience on a voyage of discovery which is as entertaining as it is educative. Ariana Mirza reports

​​Döner kebab and guest workers – that is often all that many Germans know about Turkish culture. But there's more to it than that. Turkey and Germany have had a close cultural exchange for centuries. The film director Eren Önsöz has been searching for evidence beyond the clichés, and has found out surprising pieces of information.

For example, when people shout "Türken Hopp" ("Turkish jump") during carnival in Limburg in the Saarland in southwest Germany, they are referring back to the fact that for centuries the people of the region used to travel to the Ottoman Empire as guest workers. Odd? No, just something which scarcely anyone in Germany knows about.

In her documentary film "Import-Export" Eren Önsöz confronts us with historical facts which cast a new light on the German-Turkish relationship. One aspect is the close alliance between the Ottoman Empire and the German monarchy, and another is the issue of asylum in Turkey.

The image of Turkey among Turks of German origin

In Ankara and Istanbul Önsöz follows the traces of the German intellectuals who fled to Turkey from National Socialism. Among the most prominent emigrants was the future Mayor of Berlin, Ernst Reuter.

The camera follows Reuter's son Edzard through the streets of Ankara, where he talks about his childhood in the secular, modern state. Eren Önsöz lets many such witnesses tell their tales, and the picture they offer is very different from the usual picture of Turkey as a backward country.

"It's important that so many Germans say positive things about Turkey in my film," says Eren Önsöz. "Germans are far more inclined to accept a truth told by another German."

The football trainer Christoph Daum, who lives in Istanbul, seems not quite to trust his own ability to convince others. He sounds like he's almost given up as he tells of his difficulties in trying to get dual citizenship, as well as about the deep prejudice of his fellow-Germans – "as if we would all go around here in Turkey on flying carpets," he says.

Önsöz's look at history shows that judgements and opinions can certainly change. From the mid-nineteenth century until the Weimar Republic Germany was gripped by a wave of enthusiasm for everything Ottoman.

This fascination led to such creations as the "oriental" design of cigarette packets and other items of daily use, as well as in the design of buildings. Waterworks and factories which looked like mosques were all the rage.

In addition, there's a whole gallery of German monarchs who all shared a passion for the Ottoman Empire.

Bavarian fantasy with hookahs and cushions

One of the most amusing passages in the film is the section about the turcophile King Ludwig of Bavaria. The prince, who was inclined to live in a fairy-tale, required his retainers to smoke hookahs and lie around on cushions, so that he could create the convincing illusion that he was an Ottoman ruler. 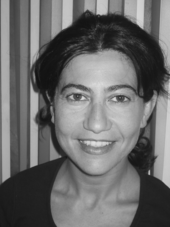 ​​About thirty years after Ludwig's death, another monarch promoted German-Turkish cultural exchange. Önsöz has done the detective work and found out that, in the time of Kaiser Wilhelm, the two countries even had joint vocational training projects.

She has researched the lives of those Turks who came as apprentices to Berlin in 1917. The young Ahmed Talib stayed in Germany, and settled in the Brandenburg village of Fürstenwalde. In the film, Talib's son tells what happened to his father during the Imperial period, under the National Socialists and in the communist GDR.

Youth culture against the negative image

But "Import-Export" does not just tell interesting biographies and present historical facts. Eren Önsöz repeatedly brings us to the present. At the very beginning of the film she speaks to young Turks who are helping create cultural life in Berlin with their ideas, and who struggle energetically against the negative image of the Turks.

Later in the film, she listens to the scathing comments of young Turks in Istanbul and Ankara, who react to German Turcophobia with a mixture of disbelief and amusement.

With her road movie, which reveals unknown facts and recalls repressed experience, the 34-year-old film director was fulfilling a long-held ambition.

For years she's been researching into the individual stories which she links in a sympathetic unconventional way. "I wanted to prove that the cultural import and export has been going for centuries and that it is an enrichment for both countries," she says.

So far the film, which was made on a tiny budget, has only been shown at festivals. But Eren Önsöz hopes that "Import-Export" will meet with interest from both German as well as Turkish television stations. It is to be hoped that it does, since Önsöz's voyage of discovery offers an entertaining contribution to the debate on Turkey's EU accession.

Malek Alloula
A Peep inside the Harem
In his book "The Colonial Harem", author Malek Alloula takes a closer look at some of the clichés and prejudices of the colonial era. Amin Farzanefar examined this collection of old harem postcards in relation to colonial history.

END_OF_DOCUMENT_TOKEN_TO_BE_REPLACED
Social media
and networks
Subscribe to our
newsletter