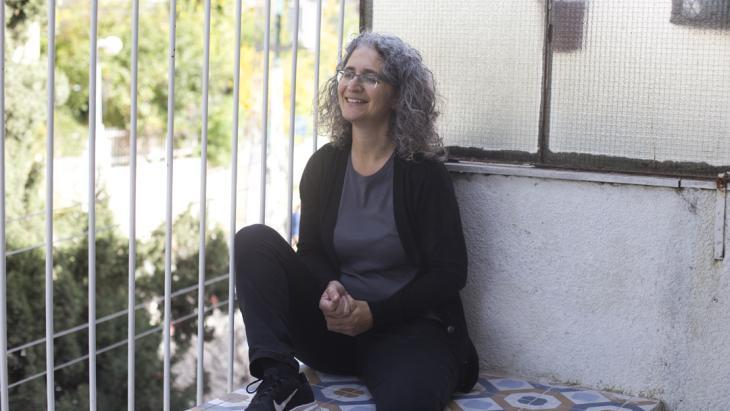 In profile: Hagit Ofran of Peace Now
The Zionist still holding a candle for peace and equality

Hagit Ofran documents settlement construction in the Palestinian territories and raises awareness of the issue in Israel in order to maintain the possibility of a two-state solution. She is also inspired by the legacy of her grandfather. By Judith Poppe

Whenever the peace organisation Peace Now brought tens of thousands of Israelis out into the streets for peace in the late 1980s, teenager Hagit Ofran stood on the sidelines and watched, fascinated. She still felt too young to join in. But a few years later – it was 1995 and Ofran had just completed her military service – she watched the parliamentary debate on the signing of the Oslo II Accord on television.

Two members of parliament from the Labour Party, the mainstay of the peace camp at the time, voted against the signing. 21-year-old Ofran could not believe it. Without further ado, she became a member of the Labour Party in order to have a say in its primary elections, and shortly thereafter became active in the organisation Peace Now.

Hagit Ofran is now the executive director of Peace Now's Settlement Watch programme – and probably knows more about Israeli settlements in the Palestinian territories than any other Israeli.

Sitting in her living room in Jerusalem's Rechavia neighbourhood with grey shoulder-length curls and glasses, the 45-year-old gives insight into sides of her personality that may seem contradictory at first glance: Ofran describes herself as a Zionist, but strongly denounces settlement construction. She speaks of herself as a workaholic, but radiates a calm that is contagious. She is clearly on one side of what is arguably the most heated and central conflict in contemporary Israel, but always speaks calmly and thoughtfully.

Another apparent contradiction is the fact that the peace activist still lives in Jerusalem, where she was born and raised, but where the conflict between the Israelis and the Palestinians is simmering like nowhere else. But that is precisely why it is important for Ofran to be there. She wants to be close to the history of the place and what happened.

"Apart from that, I love the diversity of the city," says the self-professed local patriot: "and the opportunities the city holds, even in religious terms." This matters a lot to Ofran, who comes from a religious Zionist home, turned her back on religion in her twenties, but later re-integrated some traditional religious elements into her daily life. 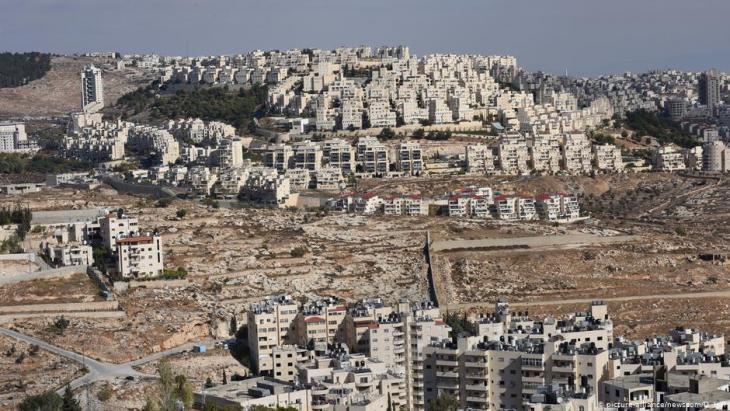 The controversial Israeli settlement Har Homa in East Jerusalem. For peace activist Hagit Ofran, the territories occupied by Israel in 1967 are the key issue for her country today. "I support the State of Israel as the home of the Jews," she says. "But in my Zionism, the Palestinians have full rights. And if one day the residents of the state elect a Palestinian as prime minister, so be it. It's not a threat."

The most coveted job in the peace camp

One would think that those who are active on the front lines against settlement construction would feel the need for diversion now and then, for trips to the movies, yoga or pub nights. Not so Ofran. When she reads books or watches movies, she says, laughing, they usually have to do with the conflict between Israelis and Palestinians. "A friend of mine once said that I probably have the most coveted job in the peace camp," she says, "He was right."

Ofran feels privileged that she can combine her bread and butter with what she believes in deep down: that the occupation and settlement building must stop. In addition, the variety of the work suits her: a Judaic studies graduate, she writes articles about settlement construction, conducts and follows court cases on outposts – settlements that are also considered illegal by Israel, but are often legalised after the fact. She conducts interviews, evaluates maps and regularly travels through the West Bank to document settlement construction.

For some Israelis, she is an icon. In 2014, the Israeli daily Haaretz named her one of the 66 most influential Israeli women. Others see her activities as a betrayal and consider her the one who destroyed its settlements. A few years ago, when Peace Now was in court challenging an outpost, she found death threats spray-painted on her stairwell on three different occasions. Still, she does not feel threatened, nor is she the type to go into hiding. She is, however, cautious, in the vicinity of some settlements where she has been pelted with stones by settlers more than once.

How does she remain so calm, with all that is happening, in the midst of conflict, working long days, and as a mother of three children whom she raises with her partner? "Maybe it's the genes," she says, smiling and shrugging, "I just don't like to be angry."

The fact that the occupation is the central issue for Israel today in her eyes, and that thinking about it is so second nature to her, may also have to do with her grandfather, Yeshayahu Leibowitz, a religious Jew and influential Israeli philosopher who was known for his harsh criticism of occupation policies. "His ideas about the occupation were very clear," Ofran says, adding, "And true. He said the occupation is immoral and terrible and must stop."

Every Shabbat, little Ofran and her family of nine would visit her grandparents; sometimes her cousins would come, too. "The house was pretty full. And we all loved talking to him." It is probable she inherited both her Zionism and her criticism of the occupation from him.

"The term Zionism has been hijacked, but I would call myself a Zionist by my own definition," she explains, "I support the State of Israel as the home of the Jews. But in my Zionism, the Palestinians have full rights. And if one day the residents of the state elect a Palestinian as prime minister, so be it. It's not a threat." 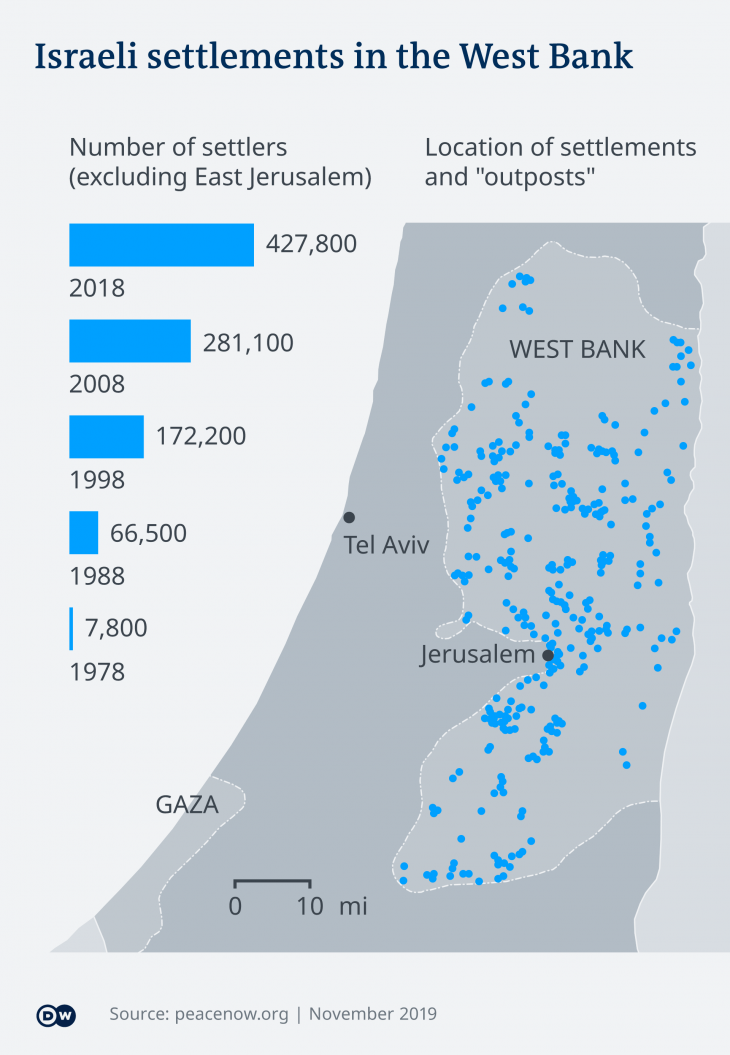 Since the signing of the Oslo II Accord by Yitzak Rabin and Yasser Arafat in 1995, the number of Israeli settlements has increased. Peace activist Hagit Ofran believes that the majority of Israelis do not support the settlements, but want to live their lives and make peace

"We grew up with questions, not answers"

Ofran's grandfather influenced his granddaughter not only politically, but also in the way she thinks.

"We grew up with questions, not answers," one of her brothers once said. The urge to question things has stayed with her. You will rarely hear simple truths from her. Her unwillingness to speak in clichés and to see things in black and white terms is also evident in the way she talks about settlers.

It would stand to reason to react with anger to those who, in her eyes, work against peace, sometimes even resorting to physical violence. Instead, she says: "Most of the settlers are decent people. They stand for values that I think are terrible, they allow themselves to live on other people's land, to squat and deprive other people of their rights. But they don't see it that way. They see it differently."

Incidentally, it is not the settlers or the supporters of the occupation who trouble Ofran the most. Rather, it is those who actually believe in the same things as Ofran, but consider it futile to fight for them anymore. Sometimes Ofran feels that the struggle is no longer to convince people of the two-state solution, but to fight against despair. Then even Ofran sometimes gets tired of her job.

So far, she has always found ways to recharge her batteries. "It's the right thing to do," she tells herself at such moments, "whether it's purposeful or not." But mostly Ofran believes that the majority of Israelis do not support the settlements, but want to live their lives and make peace. That's why, she says, using a metaphor heard often from both the Palestinian and Israeli peace camps, it takes a candle that doesn't go out. A candle that can rekindle the fire when the time is right. When there is a chance for peace.

Judith Poppe was born in 1979 and lives in Tel Aviv. She has been the correspondent for Israel and the Palestinian territories for the German daily newspaper taz since 2019. She also reports from the Middle East for various other German-language media. She received her doctorate from the University of Göttingen with a thesis on German-language poetry from Israel.

In the Settlement Watch programme, Peace Now monitors developments in settlement construction in the Palestinian territories and informs the Israeli and international public about them in videos, tours and events. In doing so, the NGO stimulates debates to press for the need for two capitals for Israelis and Palestinians in Jerusalem and to leave the window open for the two-state solution.

In Nathan Englander's novel "kaddish.com", a Jewish man is plagued by feelings of guilt and regret for disregarding the rules of the Kaddish (prayer for the dead) for his deceased ... END_OF_DOCUMENT_TOKEN_TO_BE_REPLACED

Russia is leaving no stone unturned in its attempts to make the Islamic Republic an ally in the war against Ukraine. Fortunately for Vladimir Putin, the mullahs in Tehran are ... END_OF_DOCUMENT_TOKEN_TO_BE_REPLACED

It is possible to write about the Holocaust and the crimes of colonial powers without downplaying anything. In her latest book, Charlotte Wiedemann focuses on the numerous blind ... END_OF_DOCUMENT_TOKEN_TO_BE_REPLACED

The Palestinian militant organisation Hamas, with Hezbollah's help, is building up a military presence in Lebanon, the ultimate consequences of which could be devastating, writes ... END_OF_DOCUMENT_TOKEN_TO_BE_REPLACED

With his fist bump greeting for a man he previously called a pariah, US President Biden has paved the way for Saudi Crown Prince Mohammed bin Salman's return to the international ... END_OF_DOCUMENT_TOKEN_TO_BE_REPLACED

Asked about the Shoah, Palestinians often bring up the Nakba, the displacement of Palestinians associated with the founding of the state of Israel. An Israeli Holocaust researcher ... END_OF_DOCUMENT_TOKEN_TO_BE_REPLACED
Author:
Judith Poppe
Date:
Mail:
Send via mail

END_OF_DOCUMENT_TOKEN_TO_BE_REPLACED
Social media
and networks
Subscribe to our
newsletter