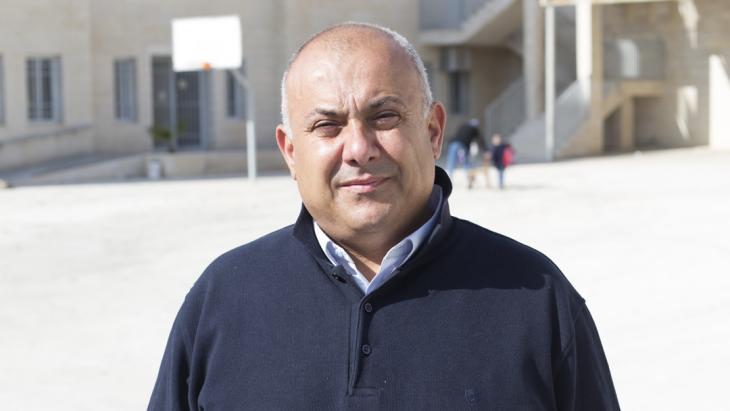 In profile: West Bank Hope Flowers School principal Ibrahim Issa
"We are educating for the well-being of humanity"

Ibrahim Issa runs an extraordinary school where he prepares Palestinian students for a future of peace. It isn't what he originally planned to do with his life, but as things turned out, Hope Flowers is exactly where he was needed. By Judith Poppe

"I am hopeful that my work will benefit the future as well," says Ibrahim Issa. The principal of the Hope Flowers School in Al Khader, just a few kilometres from Bethlehem, stands in the entrance of his school, under a framed photo of Martin Luther King: "How are we going to live in peace someday with the Israelis, if we don't pave the way for it now?" he says, looking down into the playground, where some pupils are unpacking brightly coloured spray paint cans with their teacher.

A total of 300 children attend the school founded by Issa's father in 1984. The decision to send a child to Hope Flowers is special for several reasons: it is one of the few schools in the West Bank that accepts autistic children, it teaches children to cope with trauma, and it is dedicated to working towards peace with the Israelis.

Issa, 46, has laughter lines around his eyes and, more often than not, a joke on his lips. He wears jeans and a shirt, unlike many other school principals in the Palestinian territories, many of whom only enter their schools in ties. "For me, it's about being myself," he says. "It's about giving from the bottom of my heart."

His morning meditation helps him achieve his goal of living in the moment. Early in the morning, when everything is quiet and his five children and wife are still asleep, he finds his centre in contemplation and then launches into a busy day that often starts at seven and doesn't end until nine or ten in the evening.

School between the fronts

Originally, he had planned to do something quite different: on leaving school, Issa travelled to the Netherlands to study mechanical engineering. After completing his master's degree, he intended continuing on this path. But then his father, the founder of Hope Flowers School, died in 2000. Issa returned to support his family. Shortly after, the Second Intifada began and the Hope Flowers School was literally caught between the fronts. 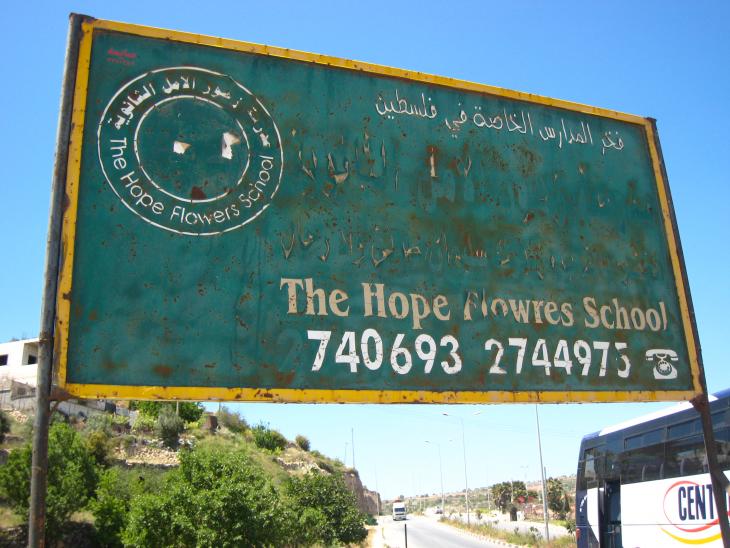 Turning negative into positive energy: in 2002, the Israeli military bulldozed Ibrahim Issa's house and put him in prison. After a week, they released him, saying they had made a mistake. Once a Dutch friend and psychotherapist helped him deal with his experiences, he realised that one sticking point was getting the children and families to talk about what they perceived as weakness: "It's just not something you do in our proud, Palestinian society," Ibrahim says. He founded the Hear My Voice project, which is still running. In the meantime, it also includes training school principals and teachers to recognise trauma in pupils. And, not least, in themselves

On the hill of the settlement of Efrat, just a few hundred metres from the school, there were Israeli military tanks; behind the school, Palestinian militants were entrenched. Shots were flying while the children were learning mathematics and Arabic. Issa quickly arranged for a bus to pick up the children from home and to bring them back after school.

Even then, at the beginning of the Second Intifada, in the midst of the shootings, he knew that to achieve anything, you also have to talk to the opposing side: time and again he negotiated short ceasefires with the Israeli commander. Frequently he had barely twenty minutes to bring sixty children home in his small bus.

Even as Issa recounts violent events, his features and posture radiate calm. "There's a phrase of my father's that I try to emulate," he nods. "Real leaders can turn negative into positive energy."

Just how important this energy reversal is for himself, was something Issa would learn in 2002, when the Israeli military bulldozed his house and put him in prison. After a week, they released him, saying they had made a mistake. But the trauma sat deep. "For a year I was not myself." A Dutch friend and psychotherapist helped him deal with his experiences. And so this traumatic event became a blessing: it enabled him to find his purpose and pass on what he had learned.

He realised that one sticking point was getting the children and families to talk about what they perceived as weakness: "It is just not something you do in our proud, Palestinian society." He founded the "Hear my voice" project and became the school's new headmaster in 2004. The project is still running. In the meantime, it also includes training school principals and teachers to recognise trauma in pupils. And not least in themselves.

"To me, it doesn't matter where someone comes from"

In order to create a peaceful society and avoid the use of violence, unhealed wounds must heal – this is the core approach pursued by Issa and the school's psychotherapists. "It is not always easy to remain authentic under the conditions here," says the visionary: "But ultimately I can honestly say that it doesn't matter to me where someone comes from. I know Palestinians with whom I really don't get along and Israelis with whom I get along just fine."

Issa nevertheless engages in dialogue and talks to Israelis. He initiates co-operation projects with Israeli institutions; currently, special needs teachers from the Hope Flowers School are working together with Israeli specialists on a programme for autistic children.

Issa nods in the direction of the teacher in the playground, who is holding a spray can: "She was worried about the cooperation at first, but now I have lost count of how many Israeli Facebook friends she has."

Not everyone agrees with what the school headmaster is doing. Nationalist Palestinians launch media campaigns against him and his school, Palestinian and Israeli security forces interview him regularly.

"Peace work in conflict areas like this one is not easy," Issa says, looking towards the settlement: "Many think I am naive. They are unable to understand the difference between collaboration and peace work." But he is helped by the conviction that he is doing the right thing and has nothing to hide.

Does he ever think about throwing in the towel? Issa shakes his head, "I am insanely happy to be living in this time and this place." He stands at the top of the stairs next to the entrance to the school, while below him students spray butterflies through stencils on the playground surface:

"It may be hard to live in a conflict zone," he says. "But despite that, there is no better way to be present and make a difference."

Judith Poppe, born in 1979, lives in Tel Aviv and is the correspondent of the daily newspaper taz for Israel and the Palestinian territories. She also reports from the Middle East for various other German-language media. She received her doctorate from the University of Göttingen with a thesis on German-language poetry from Israel.

The Hope Flowers School aims to recognise trauma in Palestinian children and help them work through it. In seminars, psychotherapists train teachers and school principals to recognise trauma in children and young adults and understand how to address it in their schools. Many of the projects are carried out jointly with Israeli institutions. In this way, the school aims to educate for a future peace.

Russia and Israel are pursuing a common interest in Syria: they both want to combat Iranian expansionism. By Markus Bickel END_OF_DOCUMENT_TOKEN_TO_BE_REPLACED

Despite Syria's lengthy civil war, dictator Bashar al-Assad is now being courted by many governments in the Middle East as if nothing ever happened. The reasons for this vary. By ... END_OF_DOCUMENT_TOKEN_TO_BE_REPLACED

Essawi Frej, the first ever minister of Arab origin in an Israeli government, explains in interview with Markus Bickel what can be achieved in a coalition of opposites END_OF_DOCUMENT_TOKEN_TO_BE_REPLACED

Hisham's Palace in the West Bank was recently renovated and is now opening to the public. Palestinians hope it will draw tourists. ... END_OF_DOCUMENT_TOKEN_TO_BE_REPLACED

Sudan is the exception to the rule in the United Arab Emirates’ counter-revolutionary playbook, writes James M. Dorsey. In contrast to Egypt or Yemen, where it went out of its way ... END_OF_DOCUMENT_TOKEN_TO_BE_REPLACED
Author:
Judith Poppe
Date:
Mail:
Send via mail

END_OF_DOCUMENT_TOKEN_TO_BE_REPLACED
Social media
and networks
Subscribe to our
newsletter