Thousands of followers from the Mouride brotherhood descended on to Dakar from across Senegal for the inauguration of the Massalikul Jinaan or 'Pathways to Heaven' mosque. By Maya Hautefeuille 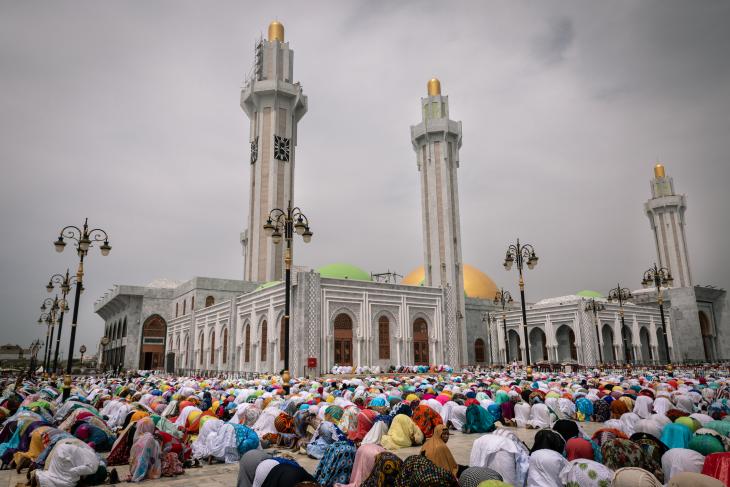 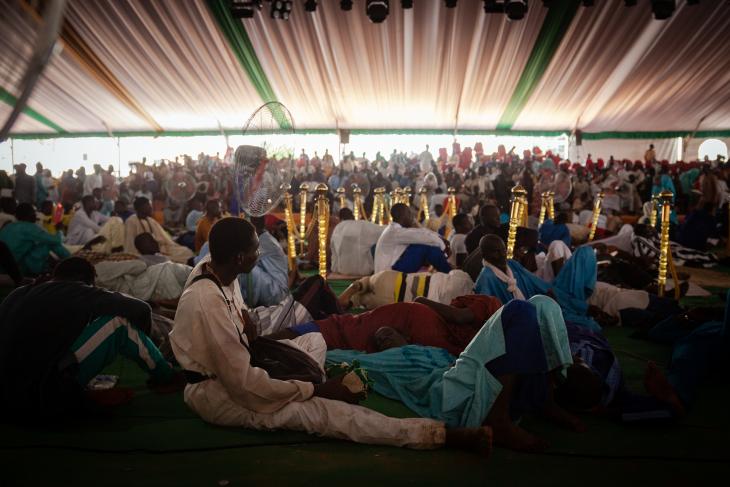 In the popular Colobane neighbourhood of Dakar where the mosque is built, many worshippers who came for the Friday inauguration slept in tents erected near the mosque the night 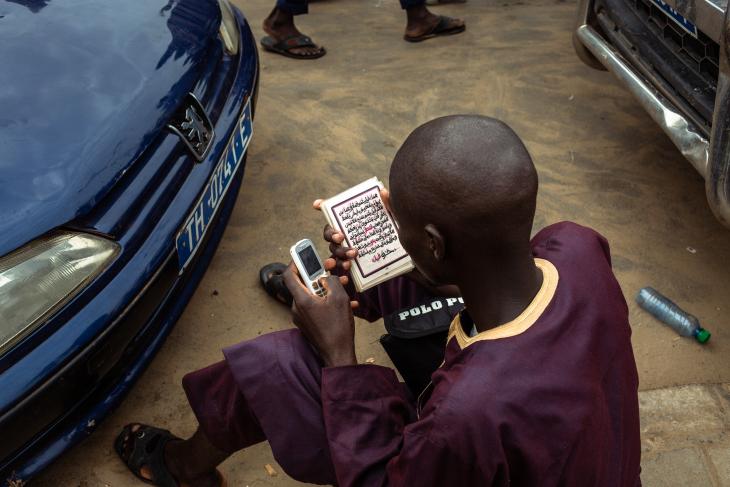 At the entrance to the mosque, a Mouride disciple reads spiritual poems known as 'khassaides' written by Cheikh Ahmadou Bamba, the 19th century founder of the Mouride brotherhood. Massalikul Jinaan, the name given to the new mosque – 'pathways to heaven' in Arabic – is one such Sufi text written by Bamba that addresses ideal behaviours and acts of worship in Islam 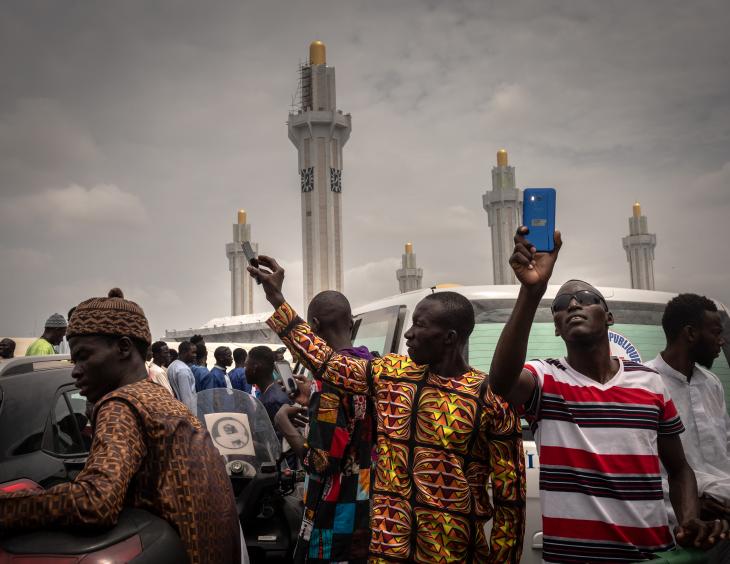 Worshippers take selfies and make video calls in front of the Massalikul Jinaan mosque, the pride of Mourides and Senegalese citizens alike that opened to great fanfare on 27 September 2019 in Dakar. Mouridism was founded by Cheikh Ahmadou Bamba, a 19th-century, nationally-revered Sufi religious leader who peacefully resisted the French colonial authorities 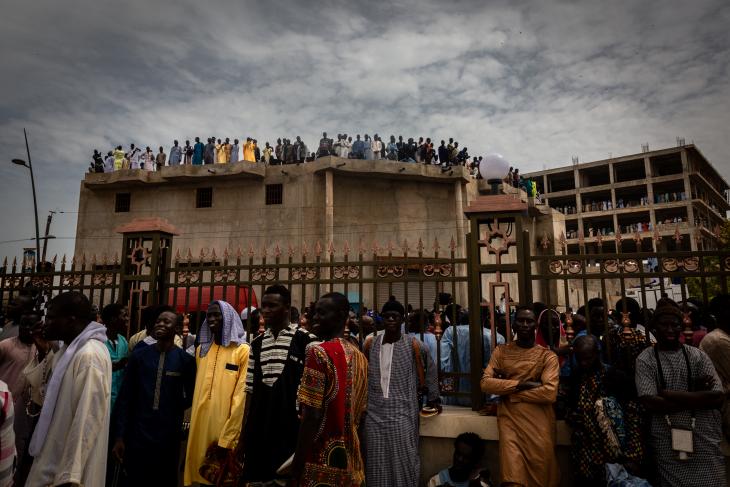 Tens of thousands of people attended the inauguration, gathering on rooftops surrounding the mosque in the Colobane neighbourhood, one of the poorer areas of the capital and home to the Socialist Party headquarters 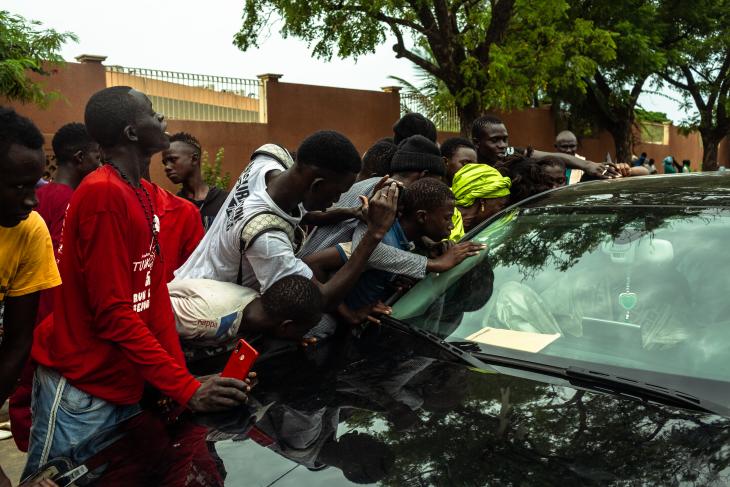 A crowd gathers around the car of retired Senegalese football star El Hadji Diouf, an ardent follower of the Mouride movement, as he pulls up to the mosque for the inauguration of the Massalikul Jinaan mosque. The Mouride movement includes several famous Senegalese icons such as musicians, football players and politicians 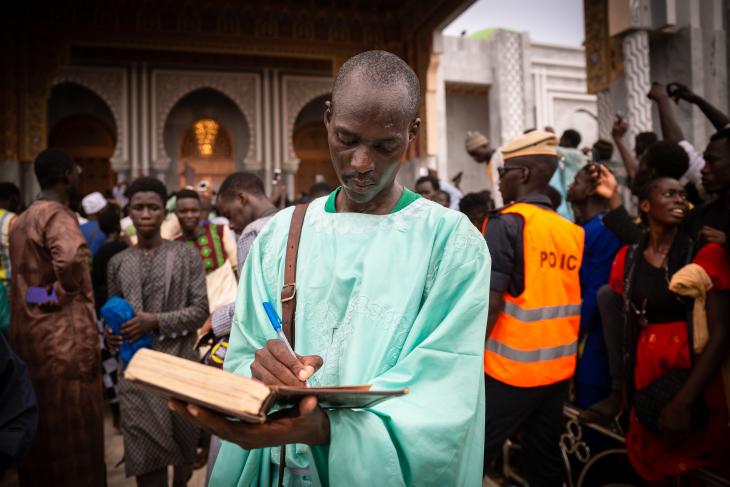 A Massalikul Jinaan caretaker consults his books at the main gates where thousands of worshippers converged to commemorate the second largest event in the history of the Mouride movement after the completion of Grand Mosque of Touba in 1963. The Mouride community is one of the largest contemporary Sufi brotherhoods to emerge from West Africa 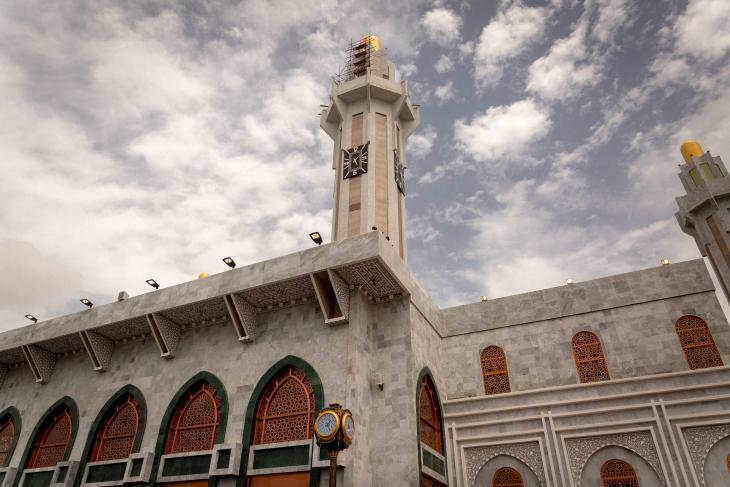 The Massalikul Jinaan now ranks as the largest mosque in West Africa with 5 minarets and a capacity of 30,000 people over a surface of 10,000 square metres 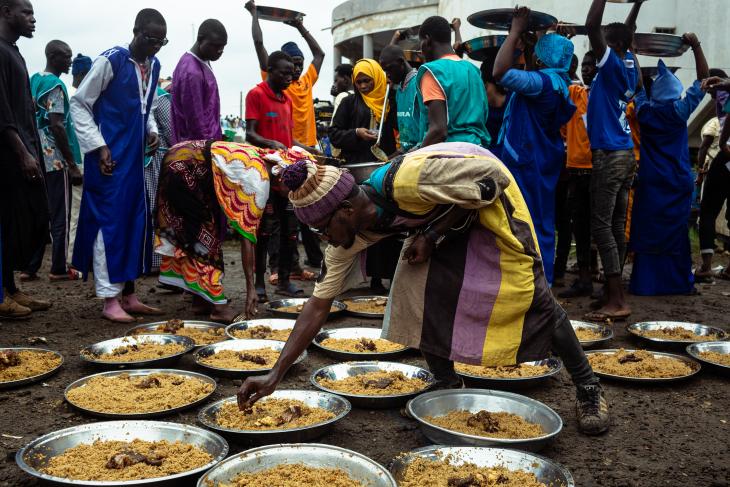 Baye Falls, a branch of Mourides whose main spiritual practice is hard labour and service to others, spent the day of the inauguration preparing and serving bowls of food for the worshippers – beef and camel meat marinated in spices 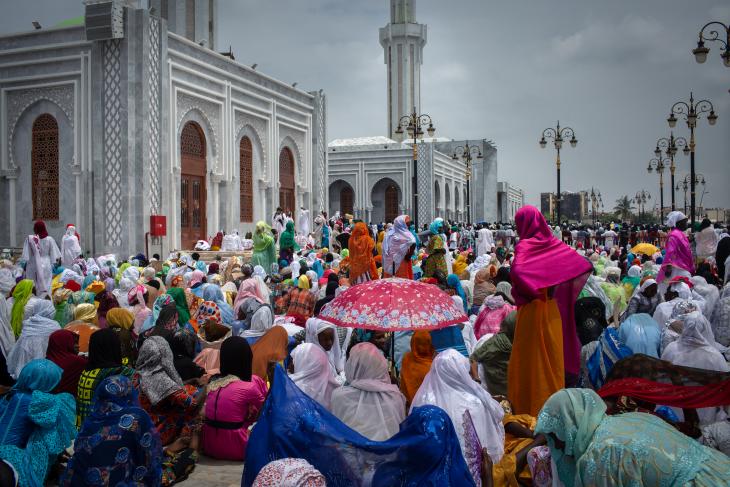 Under a scorching noon sun, female worshippers who came to the inauguration in Dakar look for remaining places to set down their prayer mats and wait for the start of Friday prayers 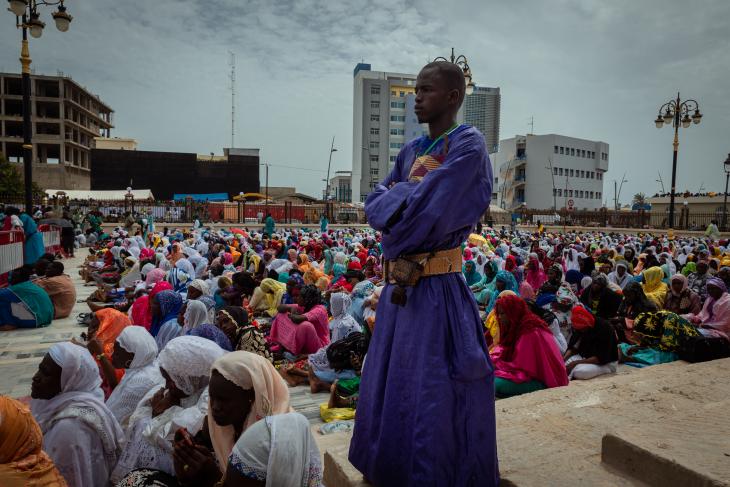 A member of a 'dahira' – a union of young Mourides under the command of one spiritual leader – looks out at the crowds gathered for the opening of the Massalikul Jinaan mosque as the Friday sermon begins. Dahira teams were stationed in every part of the mosque to oversee the smooth flow of the inauguration 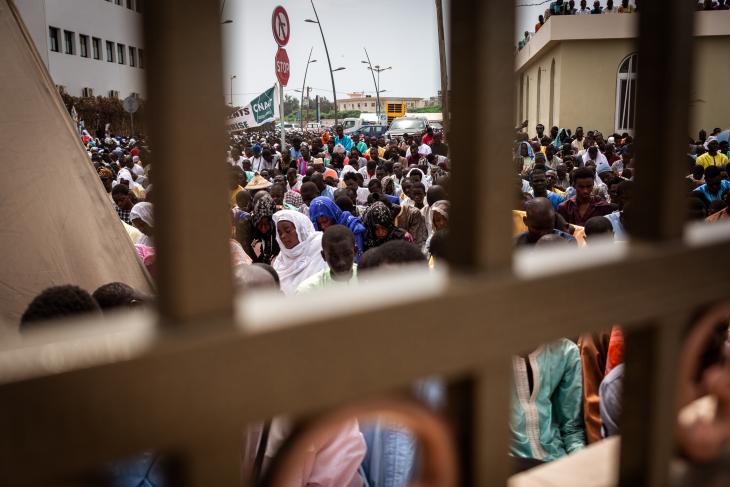 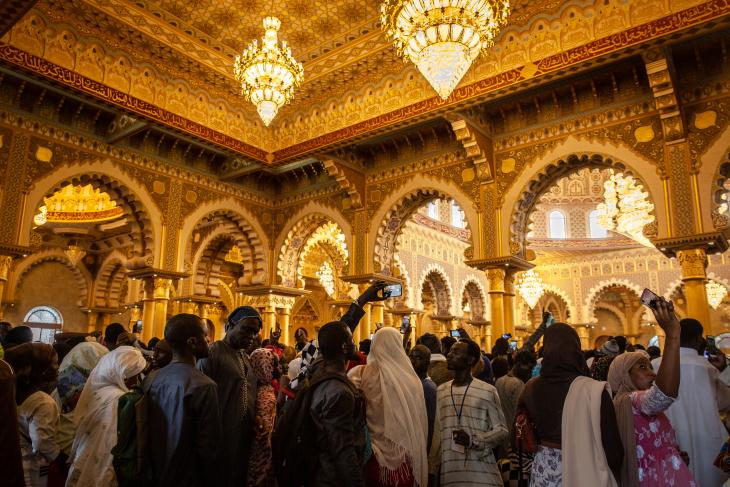 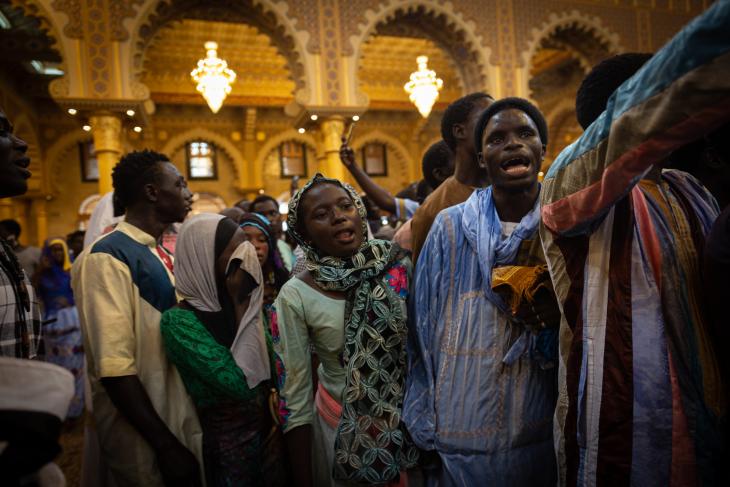 Inside the Massalikul Jinaan mosque, Baye Fall disciples gather to perform a 'dhikr' or a communal Sufi chant to commemorate Cheikh Ahmadou Bamba, whom they also nickname "the servant of the Prophet Muhammad" 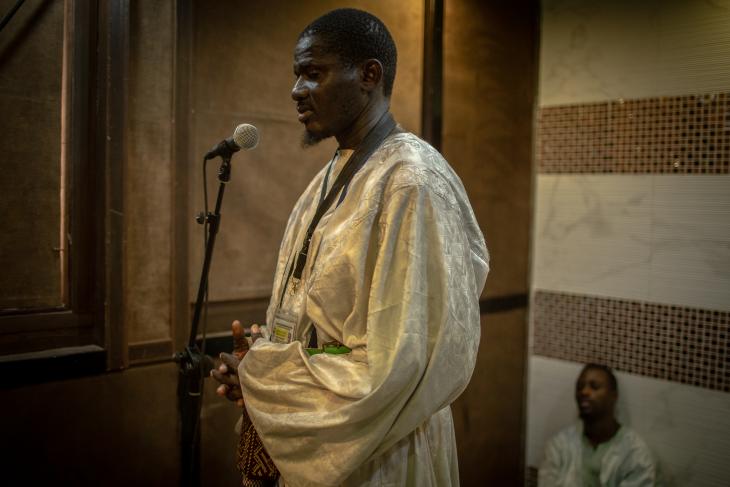 The muezzin of the Massalikul Jinaan mosque recites the afternoon call to prayer from an air conditioned room inside the mosque, hours after the mosque first opened its doors to the public 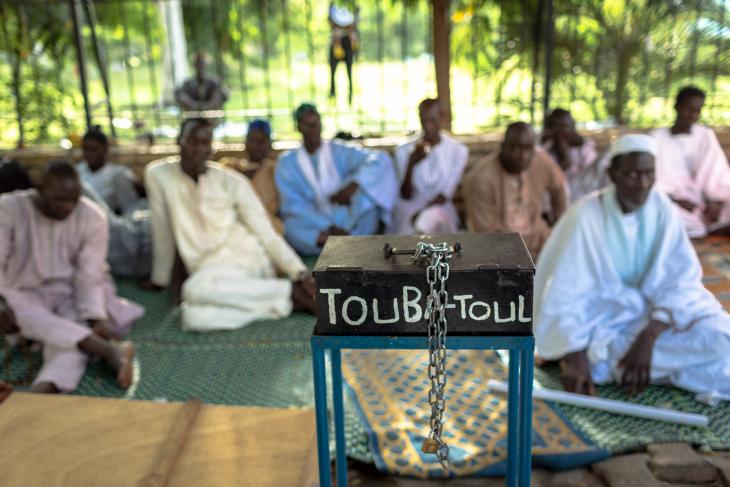 In the Colobane neighbourhood of Dakar where the Massalikul Jinaan opened, donation boxes for Touba, the spiritual city of Mourides two hours from Dakar, clutter the sidewalks. Mourides are an economic force in the country and are entrenched in religious teachings of hard work and service to other Mourides for collective prosperity 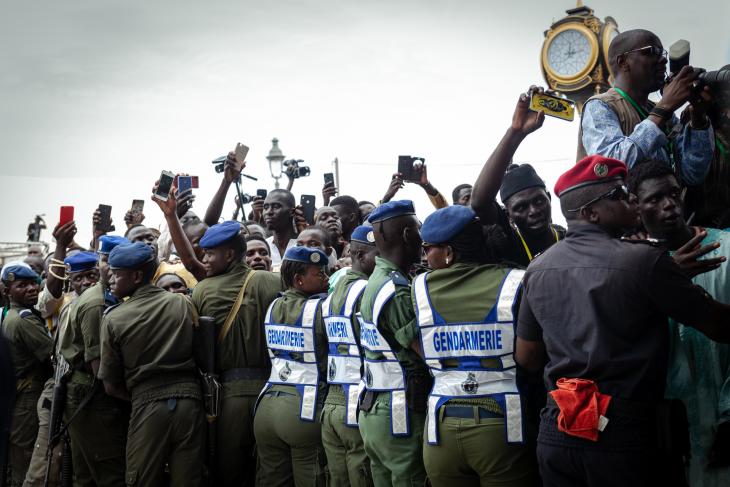 1200 security forces were on duty to control the crowds during the widely anticipated inauguration of the Massalikul Jinaan mosque in Dakar and protect the political authorities that attended the big event, including Senegal’s President Macky Sall 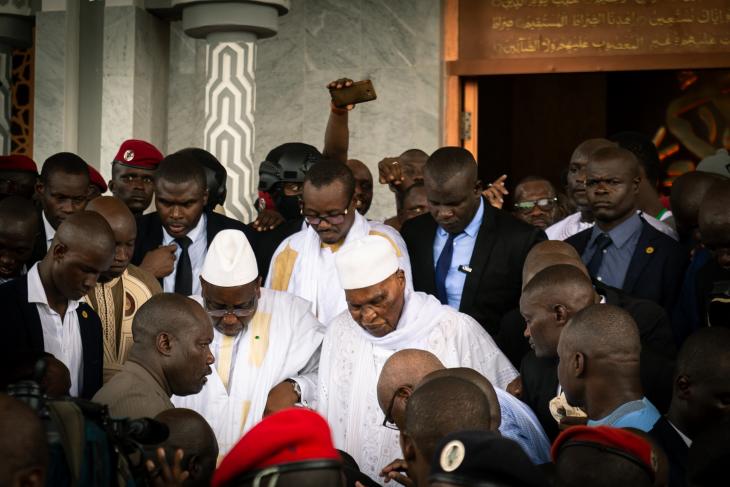 The inauguration was also a political event, with President Macky Sall and former President Abdoulaye Wade coming together to pray at the mosque, a rare show of unity in a current climate of tension over the arrest of Wade’s son for corruption. The Mourides wield strong political influence in Senegal, with presidential candidates often seeking the endorsement of Mouride leaders 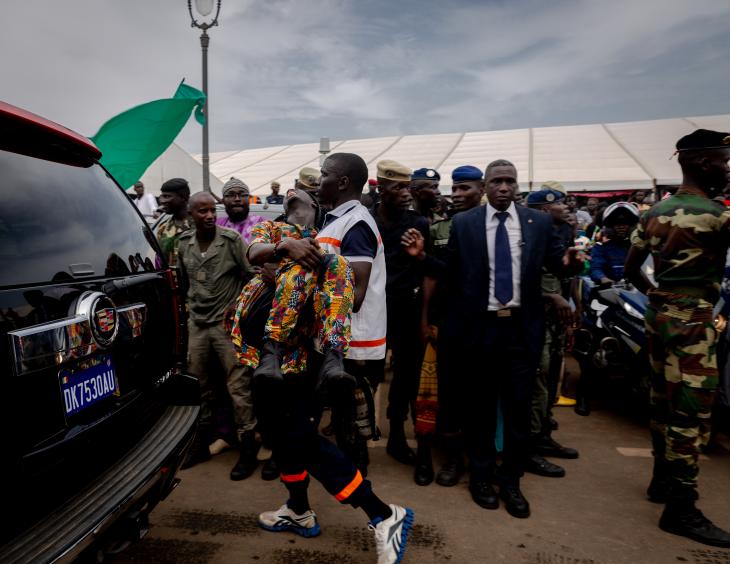 A worshipper who collapsed in fervour during the arrival of high political and religious authorities to the inauguration of the Massalikul Jinaan mosque in Dakar, is whisked away by medical services attending the event

END_OF_DOCUMENT_TOKEN_TO_BE_REPLACED
Social media
and networks
Subscribe to our
newsletter