Marches and protests are also a theme in the work of Sherin Guirgus, a 45-year-old Luxor-born, Los Angeles-based artist who like Lufti has simultaneously pursued an academic and artistic career.

An associate professor of the practice of fine art and the vice dean of faculty at the University of Southern California, Guirgus combines deep research into her artistic subject and an exacting approach to its rendition as graphic design with skills such as paper cutting, stencil-making and stitching.

In "Bint al-Nil" (ʹdaughter of the Nileʹ) Guirgus renders the biographical details and writing of the formative Egyptian feminist Doria Shafik in a series of hand cut paper, ink and acrylic paint works.

"As an abstract painter, I had to think about how I approach making a work about an historical person," Guirgus explained. 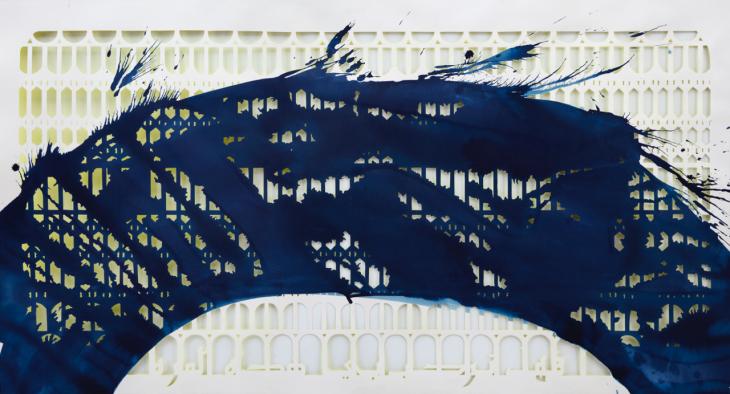 Egyptian feminism in the abstract: "these works portray a search for a sense of place, a gendered reading of lost histories and an evocative declaration of the ways in which the past continues to shape the present," said Shiva Balaghi, senior advisor to the president and AUC provost for arts and cultural programmes

In February 1951 Shafik organised a feminist congress on the AUC campus which proceeded to march to the gates of the nearby Egyptian parliament building demanding that women be granted the right to vote and hold public office.

"I was thinking about was how to have a discourse in the United States about the way that the history of feminism is documented as an entirely Western construct," said Guirgus who told us that she never imagined having the opportunity to exhibit her work in Egypt.

Site-specific architectural details such as the wrought iron fencing of parliament where Doria Shafik’s women’s march demanded equal rights and the gates of Azbakeya Gardens where she first spoke in public at the invitation of Egypt’s premiere feminist, Hoda Shaarawy, run up against the force of nature, represented in Guirgus’ work as the blue ink waters of the Nile.

"These works portray a search for a sense of place, a gendered reading of lost histories and an evocative declaration of the ways in which the past continues to shape the present," said Shiva Balaghi, senior advisor to the president and AUC provost for arts and cultural programmes.

It remains to be seen what impact art exhibitions and activities hosted by the Tahrir Cultural Center will have on the public sphere in Egypt in the future. "It has to be tested," said Lufti. "We have to wait and see to what extent the university is committed to making this a hub for arts and culture."

Political analyst Taqadum al-Khatib argues that Egypt can, in co-ordination with its European partners, develop a common vision to solve the complex conflict in Libya. For this to ... END_OF_DOCUMENT_TOKEN_TO_BE_REPLACED

The upheavals of the past year in the MENA region are arguably as momentous as those of the Arab Spring in 2011. Yet perhaps the biggest difference is that our interest seems to ... END_OF_DOCUMENT_TOKEN_TO_BE_REPLACED

In 2019, the long-running Penguin Classics series released its first novel translated from Arabic: Tawfiq al-Hakim’s "Return of the Spirit", conveyed into English by William ... END_OF_DOCUMENT_TOKEN_TO_BE_REPLACED

Equality in divorce, a ban on polygamy: reformers of Islamic family law have a clear agenda. They are exploiting the ambiguity of traditional jurisprudence. By Joseph Croitoru END_OF_DOCUMENT_TOKEN_TO_BE_REPLACED