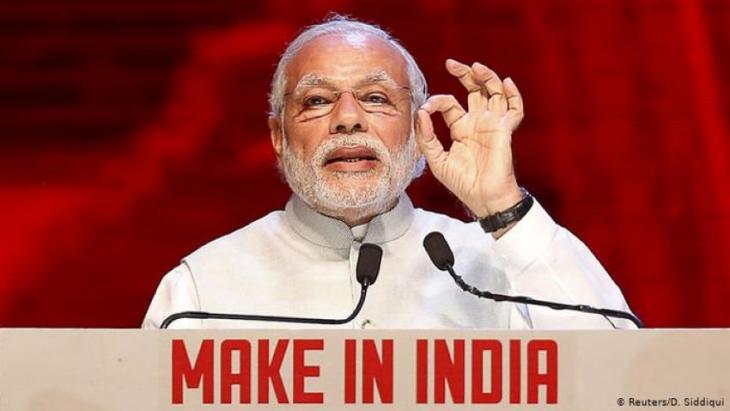 Having re-invented himself politically following the Gujarat porgroms of 2002, Narendra Modi has – to the delight of big business – consistently pursued a tough line in market-driven economic policy. Buoyed by this support, the Indian Prime Minister is now intent on realising a darker agenda of discrimination and repression. By Dominik Muller

The Constitution of India came into force on 26 January 1950. It is considered one of the most progressive democratic constitutions in the world and contains robust provisions for the protection of minorities. 26 January is one of the biggest national holidays in India and is marked every year with military parades and guests from abroad.

The guest of honour in 2020 is, of all people, the Brazilian President, Jair Bolsonaro. Like the Indian Prime Minister, Narendra Modi of the Indian People's Party (BJP), Bolsonaro pursues a right-wing, authoritarian, nationalist policy at the expense of minorities, while at the same time revelling in the backing of national and international companies.

Narendra Modi's career in high office began with a bloodbath. Just a few months after he took office as chief minister of the state of Gujarat, the worst pogroms of the new millennium on the subcontinent took place in early 2002: settlements were burned down, women raped, large numbers of people displaced, and more than 1,000 people lost their lives, most of them Muslims.

Numerous human rights organisations criticised Modi, saying he did nothing to stop the Hindu nationalist mob – which was made up of members of the National Volunteers' Organisation (RSS), the Universal Hindu Council (VHP) and even several high-ranking politicians in the BJP – for several days.

One year later, almost exactly twelve months after the pogroms, Modi sent out invitations to the first "Vibrant Gujarat", an international investors' summit. Company leaders from India and further afield, including the heads of Shell and General Motors, accepted the invitation. Since 2003, it has taken place every two years.

A paradise for investors

It is said that at every one of these events, over 10,000 deals are done and dozens of investors come to Gujarat's numerous special economic zones, including Hyundai, Ford and Peugeot from the car sector, German chemical giants BASF, Bayer and Lanxess, as well as their American competitor Dupont, the industrial giant Bosch and the aircraft and train manufacturer Bombardier.

Seduced by the ʺGujarat modelʺ: in late 2013, just a few months before the elections that catapulted Modi into the role of prime minister, the U.S. bank Goldman Sachs published an economic forecast for India. The title alone – "Modi-fying our view" – was a none-too-subtle recommendation to the Indian electorate. It called Modi an "agent of change" that would transform India from a lightweight to a market heavyweight

With Vibrant Gujarat, Modi succeeded in creating a new image not only for himself, but also for the state of Gujarat, namely that of a paradise for investors. On the one hand, there are the double-digit growth rates. On the other: nowhere in India have small farmers been dispossessed of their land to create special economic zones as quickly as in Gujarat, and nowhere in India have strikes been nipped in the bud as effectively as they have been there.

While economic reform in India under the previous Congress government – such as the privatisation of public property and state-owned companies, majority shareholding rights for foreign investors and the reform of labour laws – progressed far too slowly for many investors, the "Gujarat model" came in for much praise: in late 2013, just a few months before the elections that catapulted Modi into the role of prime minister, the U.S. bank Goldman Sachs published an economic forecast for India.

In India and beyond, there has been great sadness at the loss of the renowned Reuters photographer Danish Siddiqui, whose images captured the human face of South Asian news. He ... END_OF_DOCUMENT_TOKEN_TO_BE_REPLACED

Many marriages to British Asian men are accompanied by false promises of improved finances. Later when the men abandon their wives to return to the UK, some brides' families find ... END_OF_DOCUMENT_TOKEN_TO_BE_REPLACED

India is not alone in feeling great sadness today over the death of renowned Reuters photojournalist Danish Siddiqui. He was killed in Afghanistan during clashes between Afghan ... END_OF_DOCUMENT_TOKEN_TO_BE_REPLACED

India's prime minister has an "edifice complex" that has given rise to grand new government buildings, including a planned new parliament. Sadly, the spirit of deliberation and ... END_OF_DOCUMENT_TOKEN_TO_BE_REPLACED

Despite over a thousand years of co-existence, India's Hindus and Muslims often know little about each other's religious traditions. In an effort to promote understanding and ... END_OF_DOCUMENT_TOKEN_TO_BE_REPLACED

Over the years, the relationship between arch-rivals India and Pakistan has been shaped by conflict and confrontation. For some time now, however, both countries have been singing ... END_OF_DOCUMENT_TOKEN_TO_BE_REPLACED
Author:
Dominik Müller
Date:
Mail:
Send via mail

END_OF_DOCUMENT_TOKEN_TO_BE_REPLACED
Social media
and networks
Subscribe to our
newsletter