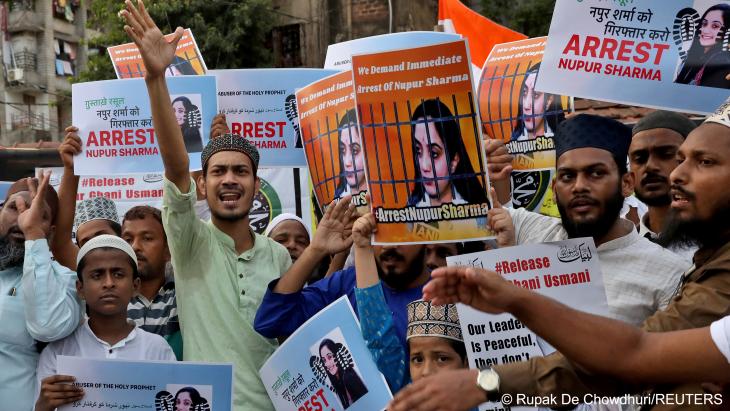 Police in New Delhi said on Thursday they have filed a complaint against a suspended spokeswoman for India's ruling party for "inciting people on divisive lines" on social media, days after her remarks about the Prophet Muhammad led to a diplomatic backlash.

Calls have grown for a boycott of Indian products in Gulf countries, while the BJP has suspended Sharma and asked its spokespeople to speak more responsibly in public.

Delhi Police said they had registered two preliminary complaints – known as first information reports – on the basis "of social media analysis against those trying to disrupt public tranquillity & inciting people on divisive lines".

"One pertains to Ms Nupur Sharma & the other against multiple social media entities," the department said on Twitter, without specifying what posts triggered the complaint and what were the entities.

"Even as notices are being sent to social media intermediaries for details of those behind these accounts/entities, #DelhiPolice appeals to everyone to desist from posting anything that may disrupt social and communal harmony."

In India, the filing of a complaint is the first process in any police investigation and is typically followed by questioning of the accused.

Sharma did not immediately respond to a request for comment sent via a Twitter direct message. Reuters could not find a phone number or email address for her. A BJP spokesperson did not answer his phone.

Sharma said on Twitter on Sunday her comment on the prophet was in response to "continuous insult and disrespect" towards a Hindu god during the TV debate, but that she had withdrawn her statement.

Many Indian TV stations regularly host debates on communal issues where Muslim and Hindu speakers shout at each other.

END_OF_DOCUMENT_TOKEN_TO_BE_REPLACED
Social media
and networks
Subscribe to our
newsletter