There is no doubt that during Modi's first legislative period there was a significant rise in anti-Muslim violence in India. The most disturbing sign of the prevailing mood are the forty or so lynchings of Muslims, primarily in connection with the alleged consumption of beef. These acts attest to a cultural climate sustained by a Hindu sense of superiority, one in which it has at least become easier to attack minorities. Many of the incidents went unpunished.

And then there is the systematic structural discrimination against Muslims that does not make the headlines, whether in education, the housing market or health care. This inequality has always existed, but it has been cemented further under BJP leadership. All of this has strengthened the impression among Muslims in many regions in recent years that they are no longer wanted in their country and at best only tolerated. Particularly in northern India, Muslims often no longer feel safe in their ancestral homelands.

After a strongly polarising election campaign focussing on the issue of security, with Pakistan as the arch-enemy, critics see Modi's party as being on a more or less open mission to slowly but surely expunge from the constitution the secularism that was once enshrined there by India's first statesman, Jawaharlal Nehru and to establish a Hindutva state.

A centuries-long spirit of fruitful co-existence

At the shrine in Ajmer little can be felt of such fears and oppression. Just like every evening, a large crowd of spectators gathers around the Qawwali musicians who clap as they ecstatically recite the hymns of the great Sufi poets against a night sky filled with the scent of incense. Men and women mingle in the audience. It's hard to tell how many non-Muslims have come here this evening. The shrine of Moinuddin Chishti is in fact one of the places in India that symbolise the centuries-long spirit of fruitful co-existence among the religions on the Indian subcontinent. 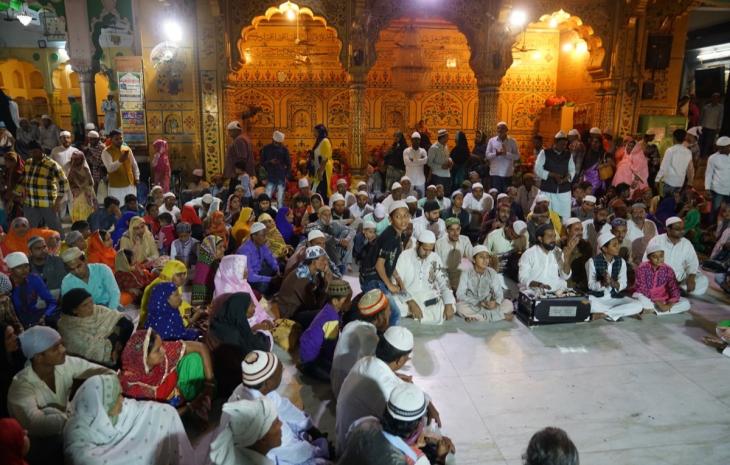 Just like every evening, a large crowd of spectators gathers around the Qawwali musicians who clap as they ecstatically recite the hymns of the great Sufi poets against a night sky filled with the scent of incense. Men and women mingle in the audience. It's hard to tell how many non-Muslims have come here this evening. The shrine of Moinuddin Chishti is in fact one of the places in India that symbolise the centuries-long spirit of fruitful co-existence among the religions on the Indian subcontinent

This spirit can be felt particularly keenly at the numerous Sufi shrines in India and Pakistan, highlighting the confluence of religious and spiritual traditions so typical of South Asia. Muslims often adopted Hindu customs and festivals after migrating to South Asia and a very special Indian brand of popular Islam developed. Moinuddin Chishti of Ajmer based his teaching on maxims advocating tolerance and peaceful co-existence, such as "Love for everyone, hatred for none".

Leaving the shrine complex through one of the back exits, the visitor soon loses himself in a labyrinth of narrow, congested alleys. Here there are traders hawking devotional items, soup chefs cooking meals for the pilgrims and cliques of beggars counting on the Muslim tourists' sense of duty to give to those less fortunate.

The Chishty Foundation has its headquarters in one of these alleys, founded by descendants of Moinuddin Chishti and dedicated to interfaith dialogue and promoting peace. In the basement of a non-descript apartment house, the foundation's chairman, Seyyed Salman Chishty, runs a library that also serves as a centre for dialogue and events.

In India, bricks are traditionally made by hand. The job is dirty, exhausting, poorly paid, and mainly done by women. ... END_OF_DOCUMENT_TOKEN_TO_BE_REPLACED

Modi’s Citizenship Amendment Act grants the Indian citizenship to members of persecuted minorities from neighbouring countries, yet excludes Muslims. This has sparked waves of ... END_OF_DOCUMENT_TOKEN_TO_BE_REPLACED

Having re-invented himself politically following the Gujarat porgroms of 2002, Narendra Modi has – to the delight of big business – consistently pursued a tough line in market- ... END_OF_DOCUMENT_TOKEN_TO_BE_REPLACED

Dozens of people have been killed as a result of protests against India's controversial Citizenship Amendment Act. Critics say the law is aimed at marginalising Muslims and goes ... END_OF_DOCUMENT_TOKEN_TO_BE_REPLACED

India's rapid descent into xenophobia, violence and irrationality has an important economic dimension, but it takes politicians to channel these emotions into nationalism and to ... END_OF_DOCUMENT_TOKEN_TO_BE_REPLACED

Since the leadership in New Delhi revoked the special autonomy status, previously laid down in the Indian constitution, for the state of Jammu and Kashmir at the beginning of ... END_OF_DOCUMENT_TOKEN_TO_BE_REPLACED
Author:
Marian Brehmer
Date:
Mail:
Send via mail

END_OF_DOCUMENT_TOKEN_TO_BE_REPLACED
Social media
and networks
Subscribe to our
newsletter