Maintaining an intercultural discourse on equal terms is one of the Chishty Foundation's missions. "Ajmer is a place of peace and hope for India and beyond," says Salman Chishty.

As if to prove it, he invites us to a seminar taking place the following day where the spiritual leaders of the 500,000 inhabitants of Ajmer will convene. Upon the invitation of the United Religions Initiative network, a Muslim sheikh, a Hindu priest, a turbaned Sikh leader, a monk dressed in orange and a local pastor take their place on the podium. After a round of prayers, they exchange views on the Indian spirit of co-existence. "The world can learn from us here in India", says the Sikh priest in conclusion, reaping applause.

One might think it's all just empty phrases paying lip service to sugar-coated sentiments, but the clergyman can certainly back his statements with a few centuries of Indian history: whether in the progressive Hindu-Muslim exchange of ideas under Mogul ruler Akbar, in the coming together of itinerant Sufi preachers and Brahmins in Kashmir, or in the peaceful development of Islam fostered by merchants on the Konkan Coast in south-west India. Popular legend has it that when Christian missionaries arrived in today's Kerala, they were soon driven to despair: the locals gratefully accepted the crucifix with Jesus and simply placed it among the other statues in the Hindu temple. 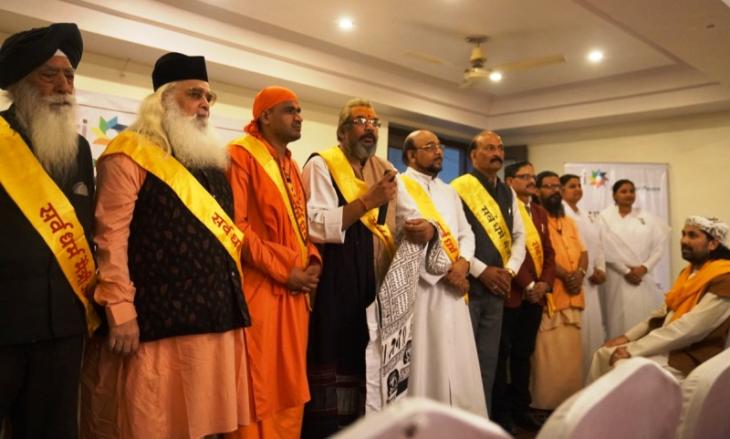 Fostering a sense of religious equality: upon the invitation of the United Religions Initiative network, a Muslim sheikh, a Hindu priest, a turbaned Sikh leader, a monk dressed in orange and a local pastor take their place on the podium. After a round of prayers, they exchange views on the Indian spirit of co-existence. "The world can learn from us here in India", says the Sikh priest in conclusion, reaping applause

For centuries, India has been about inclusion rather than rejection, convergence rather than division. Of course, there has been no shortage either of episodes of conquest and bloodshed in the history of the subcontinent. And yet, despite all the negative developments of late, we can still hope that this singular Indian attitude will live on in many places, just as it has survived the storms and attacks of the past.

Although the social climate as a whole has become more fraught, the last five years have at least not witnessed any of the great uprisings or pogroms that have shaken India at irregular intervals. Relative to the enormous Indian population, these are ugly facts of history but should not lead us to draw any hasty or sweeping conclusions.

The responsibility of the mass media

Even if the signs are not pointing in a favourable direction and Western commentators like to write off India's pluralism, we must not forget that India is extremely diverse and resilient. Furthermore, only about a third of the Indian population actually voted for Modi. The fact that he was nevertheless able to achieve an absolute majority can be attributed to the fragmentation of the Indian party landscape.

One key to building peace lies in the social responsibility of the Indian mass media. They have been giving the impression for years that the country is struggling under a never-ending clash of cultures. The influence of such selective, divisive reporting and propaganda on the Indian people should not be underestimated. Comparatively little coverage is given in contrast to positive examples of harmonious co-existence, such as the joint celebration of religious festivals.

In the final analysis, a vigilant civil society must confront the prevailing narratives and defend pluralism based on a profound understanding of values. The renowned historian and political scientist Ramachandra Guha recently pointed out in an editorial for the Indian Telegraph that the Indian constitution's commitment to pluralism is still intact, despite all reasons for concern. But he also warned: "India is not yet a Hindu Pakistan; yet it is closer to being so than at any time since its founding."

In India, bricks are traditionally made by hand. The job is dirty, exhausting, poorly paid, and mainly done by women. ... END_OF_DOCUMENT_TOKEN_TO_BE_REPLACED

Modi’s Citizenship Amendment Act grants the Indian citizenship to members of persecuted minorities from neighbouring countries, yet excludes Muslims. This has sparked waves of ... END_OF_DOCUMENT_TOKEN_TO_BE_REPLACED

Having re-invented himself politically following the Gujarat porgroms of 2002, Narendra Modi has – to the delight of big business – consistently pursued a tough line in market- ... END_OF_DOCUMENT_TOKEN_TO_BE_REPLACED

Dozens of people have been killed as a result of protests against India's controversial Citizenship Amendment Act. Critics say the law is aimed at marginalising Muslims and goes ... END_OF_DOCUMENT_TOKEN_TO_BE_REPLACED

India's rapid descent into xenophobia, violence and irrationality has an important economic dimension, but it takes politicians to channel these emotions into nationalism and to ... END_OF_DOCUMENT_TOKEN_TO_BE_REPLACED

Since the leadership in New Delhi revoked the special autonomy status, previously laid down in the Indian constitution, for the state of Jammu and Kashmir at the beginning of ... END_OF_DOCUMENT_TOKEN_TO_BE_REPLACED
Author:
Marian Brehmer
Date:
Mail:
Send via mail