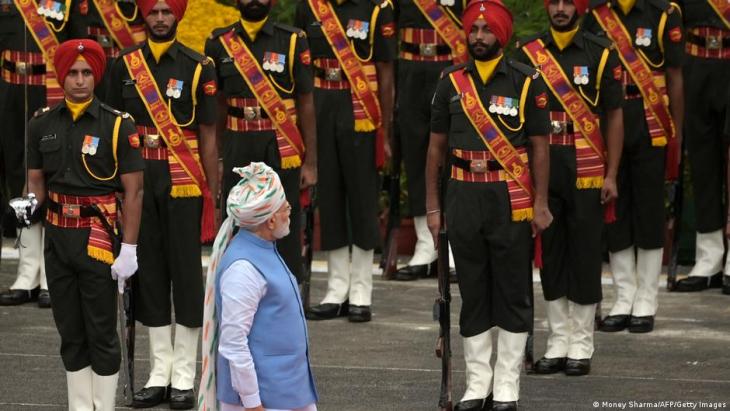 In office for more than eight years, Narendra Modi’s high popularity across India and formidable electoral clout make him nearly invincible. But, while his success in amassing political power is unquestionable, his ability to use it for the benefit of the vast majority of citizens remains very much in doubt. By Shashi Tharoor

Indian Prime Minister Narendra Modi recently completed eight years in office, and as India celebrates the 75th anniversary of its independence, his formidable electoral clout makes him look near-invincible. But his personalised style of policymaking remains impulsive and idiosyncratic – with calamitous consequences for India’s governance.

In May, for example, Modi’s government announced that India would "feed the world" by exporting more wheat as the war in Ukraine disrupted global supplies, before abruptly imposing an export ban and partly reversing it a few days later. And his administration’s plan to replace guaranteed long-term employment with pensions for new military recruits with four-year contracts has ignited protests by young people across the country.

These decisions illustrate not only Modi’s remarkable dominance of India’s fractious politics but also his over-centralisation of power. Modi runs a parliamentary system in a presidential style, giving Indians the worst of both worlds: a powerful executive unfettered by an independent legislature.

Consider the Modi government’s most dramatic decisions to date: the overnight demonetisation in 2016 of 86% of India’s currency in circulation, the draconian total lockdown of the country in response to the incipient COVID-19 pandemic, and the "surgical strikes" across the Line of Control between India and Pakistan. All three decisions were taken by Modi himself and a handful of unelected advisers, and not, as one would expect in a parliamentary system, by the cabinet.

The same was true of the government’s imposition of three highly unpopular farm reform laws, its revocation of Jammu and Kashmir’s autonomy and its decision to launch and then suspend a campaign to create a National Register of Citizens. In each case, there was no legislative input, not even from those MPs entrusted with formal ministerial authority. Nor was there any consultation with state governments, though India has a federal system. 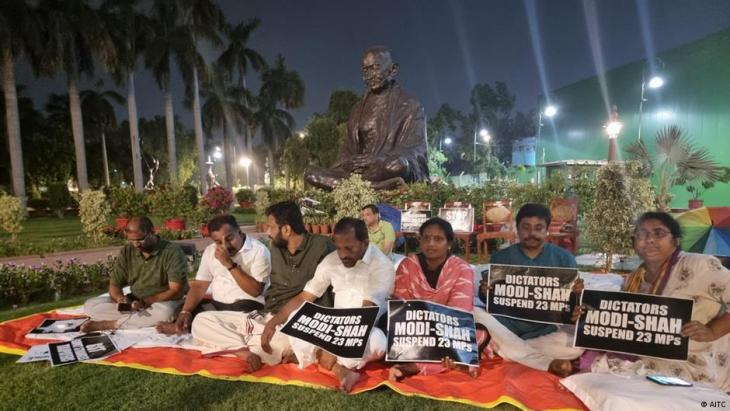 Modi's thinly veiled contempt for the legislative fray: demanding a debate on current price rises, twenty-three Rajya Sabha members and four from the Lok Sabha were suspended in India on 24 and 25 July for shouting slogans and carrying placards in parliament. According to Manickam Tagore, one of the four Congress MPs suspended from Lok Sabha taking part in the subsequent sit and sleep-in, they were protesting "the Modi-Shah onslaught on democracy"

A secretive modus operandi, involving what former United Nations Secretary-General Boutros Boutros-Ghali once called "stealth and sudden violence", appears to be a hallmark of Modi’s leadership style. Since his time as chief minister of Gujarat, when he reputedly bypassed his cabinet and worked entirely with a trusted group of unelected officials, he has shown more faith in bureaucrats than in politicians.

None of the usual constraints of a parliamentary system inhibit Modi. He has a solid majority in the Lok Sabha, the lower house of India’s parliament, and thus does not need to waste time on legislative deal-making. His cabinet meetings are said to be exercises in one-way communication and top-down decisions. Ministers make presentations and proposals on demand and never challenge the prime minister’s position. The few token cabinet ministers from allied parties have little authority and know that they are dispensable, since Modi does not depend on them to maintain control of parliament.

This might be manageable if Modi were at his desk non-stop, but he spends a large share of his time travelling. As prime minister, he has so far visited over 60 countries and countless destinations in India, the latter almost entirely in campaign mode. Modi has discovered that his position gives him a "bully pulpit" to preach to the country, and he exercises his considerable oratorical skills more often in foreign assemblies than in the Lok Sabha.

In fact, Modi displays a thinly veiled contempt for the legislative fray. As he demonstrated in Gujarat, he values his legislative majority only insofar as it enables and legitimises his executive power. Otherwise, he has no need for the legislature, except for the unavoidable task of passing budgets and approving laws.

The number of parliamentary meetings had declined precipitously under Modi even before the pandemic led to entire sessions being truncated. When the Lok Sabha does meet, bills are frequently passed in minutes, without the scrutiny of a parliamentary committee or serious debate. Modi’s railroading of parliament makes the case for a genuine presidential system amply clear: never has a separation of powers between India’s executive and legislative branches been more necessary than it is today.

Parliament is not the only institution that Modi’s government has undermined. On taking office in 2014, Modi promised "minimum government, maximum governance". But he has delivered the opposite: a level of government control that many regard as authoritarian, the centralisation of decision-making to a degree that disempowers ministries and an administrative style that reflects his own outsize personality. 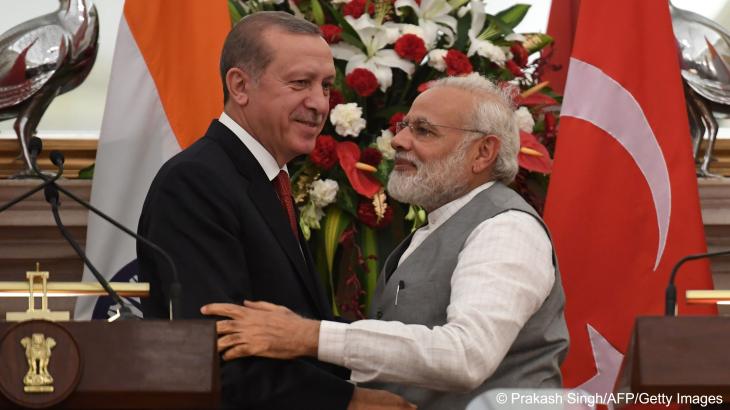 The men who get things done? Modi's formula resembles Turkish President Recep Tayyip Erdogan's. Besides authoritarian tendencies, it emphasises religious identity and the marginalisation of minorities, demonisation of secular cosmopolitanism, and hyper-nationalism. Yet, whereas Erdogan’s initial success was based on strong economic growth, Modi mismanaged India’s economy. His disastrous demonetisation knocked over two percentage points off GDP growth, he has presided over some of the highest levels of unemployment and the lowest labour-force participation rate ever recorded in India. And now the country is faced with surging inflation

Many have accused the Modi government of subverting institutions like the Reserve Bank of India, the Election Commission, the Central Bureau of Investigation and the judiciary, and of trying to emasculate the media through various attacks on freedom of speech and expression.

Modi’s formula resembles Turkish President Recep Tayyip Erdogan’s. Besides authoritarian tendencies, it emphasises religious identity and the marginalisation of minorities, demonisation of secular cosmopolitanism, and hyper-nationalism. All of this is enabled by the larger-than-life image of "the man who gets things done".

Modi may have wished to reshape India in the way that Erdogan has transformed Turkey. But, whereas Erdogan’s initial success was based on strong economic growth, Modi has mismanaged India’s economy. His disastrous demonetisation has knocked over two percentage points off GDP growth, and he has presided over some of the highest levels of unemployment and the lowest labour-force participation rate ever recorded in India. More recently, he has been unable to control surging inflation.

As India turns 75 and Modi begins his ninth year as prime minister, his popularity remains high, the electoral machine at his service formidable, the opposition divided and his zealots ready to march. His success in amassing political power is unquestionable. But his ability to use it for the benefit of the vast majority of Indians remains very much in doubt.

Following the recent brutal attack on Salman Rushdie, famous writers have been reading passages from his works. Torsten Landsberg takes a look at the struggle in 1988 to publish " ... END_OF_DOCUMENT_TOKEN_TO_BE_REPLACED

The Biden administration could have used Pakistan’s economic crisis to compel the country to sever its longstanding ties to terrorist groups. Instead, the U.S. protects and ... END_OF_DOCUMENT_TOKEN_TO_BE_REPLACED

For some in India, the death of Queen Elizabeth II has provoked sympathies for a deeply respected figure, while for a few others, it jogged memories of a bloody history under the ... END_OF_DOCUMENT_TOKEN_TO_BE_REPLACED

When she ascended the throne, millions of Muslims still lived under British rule. Later, Elizabeth II appealed for tolerance in a multi-religious society. She was the first ... END_OF_DOCUMENT_TOKEN_TO_BE_REPLACED

No country in the Islamic world is influenced as strongly by the traditions of Sufi culture as Pakistan. Yet the Sufis there have been under attack from Islamic hardliners for ... END_OF_DOCUMENT_TOKEN_TO_BE_REPLACED

END_OF_DOCUMENT_TOKEN_TO_BE_REPLACED
Social media
and networks
Subscribe to our
newsletter