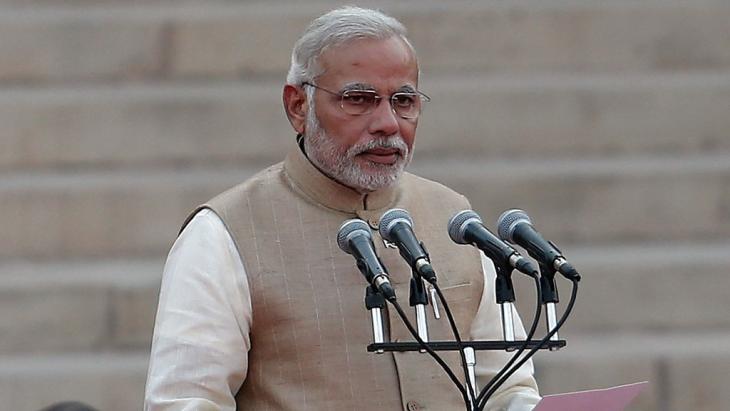 Indian Muslims' attitudes to the election of Narendra Modi

Many in India, particularly those in the country's Muslim community, are wondering whether India's new prime minister, Narendra Modi, will modify his stance on extremism. At the same time, they hope that Modi, who is feted with having brought prosperity to the state of Gujarat, can improve both the economy and the lot of Muslims, who face difficulties and discrimination in their everyday lives. By Roma Rajpal Weiß

Touted as "India's most polarising politician", Narendra Modi of the Hindu Nationalist Bhartiya Janata Party (BJP) has assumed office as the country's prime minister. Among the people present at the ceremony was the prime minister of the Islamic Republic of Pakistan, Nawaz Sharif.

"This is a clear sign," said Mohammed Ayub, a shop-owner in New Delhi. Ayub believes that Modi's extension of an invitation to Sharif is the first promising sign for the country's Muslims. "It is not easy to forget the past, but we have to move on and to think of it. What choice did we really have?"

Ayub's outlook is shared by a large part of the electorate. The BJP won a clear majority in the parliamentary polls, and the country's ruling party was deliberately voted out of power. The public had lost faith in the government, its image tainted by a string of corruption scandals.

Ayub owns a grocery store and has observed the price of basic necessities shoot through the roof in recent times. "There is so much inflation; a kilo of rice costs 18 Indian Rupees, and it is almost double what it was five years back." According to the Central Statistics Office (CSO), the All India Consumer Price Index, which measures changes in the prices of goods and services, averaged 10 per cent last year.

Ayub is not aware that the inflation rate is at an all time high, reaching double digits, but he feels the pinch. "Modi brought prosperity to Gujarat; I am hoping that he will do the same for all of India," he told Qantara.de. 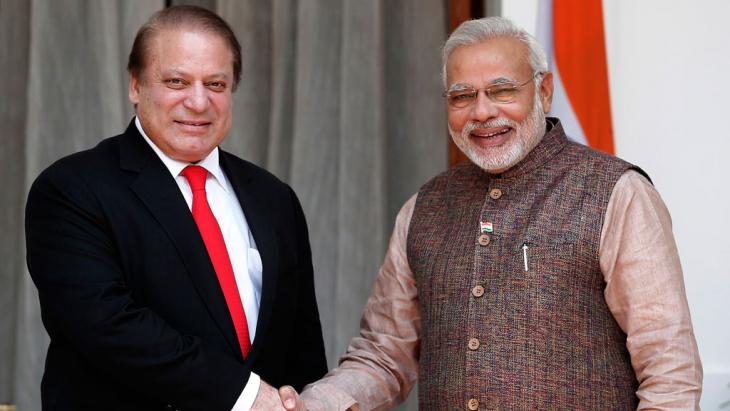 Prime Minister Narendra Modi (right) shakes hands with his Pakistani counterpart Nawaz Sharif before the start of their bilateral meeting in New Delhi on 27 May 2014, Modi's first day in office. The two discussed trade, terrorism and relations between the two countries. After the meeting, Sharif said that the talks had been "good and constructive" and held in "a cordial atmosphere"

During the election campaign, Modi stressed his humble roots as a tea stall owner, pitching himself against the Congress candidate, the foreign-educated Rahul Gandhi, great-grandson of the country's first prime minister, Jawaharlal Nehru. Modi avoided religious issues and focused on promoting his success story, the growth of Gujarat, which he led as the state's chief minister.

Wasiff Khan, a businessman based in Mumbai, does not buy Modi's development story. He deliberately cast his vote for Congress, simply because he did not want to vote for the BJP. "It is difficult to forgive and forget," Khan told Qantara.de. He believes that the pluralism of multi-ethnic India may suffer under Modi.

While Modi was chief minister of Gujarat in 2002, the country witnessed the dark tragedy of communal violence when over 1,000 people, many of whom were Muslims, were killed in religious riots. Both sides retreated deeply into their camps. Khan says that the incident definitely changed the way today's generation perceives Muslims. "If a family is looking for a flat to rent or buy, the first question should be about their income, but it inevitably ends up being about religion, and prospective Muslim buyers are rejected."

Muslims at a disadvantage

The Sachar Report, which was commissioned by the then prime minister, Manmohan Singh, to evaluate the social, economic and educational background of the Muslim Community of India and was released in November 2006, also highlighted the same problem. Eight years on, an average Muslim still finds it difficult to rent a flat in a city.

The report also highlighted other disturbing facts, such as the one that one-third of small villages with a high concentration of Muslims did not have any educational institutions and 40 per cent of large villages did not have any medical facilities.

"The Muslim community had high hopes from the previous government and they were deeply disappointed," says Amitabh Kundu, head of the committee to evaluate the implementation of the recommendations made by the Sachar report, adding that the urban Muslim still has a long battle ahead. In the run-up to every election, politicians from various parties try to appease India's largest minority, which makes up 15 per cent of the country's population. Promises of university places and jobs are made to Muslims, as they are to Hindu lower caste minorities and tribal communities. 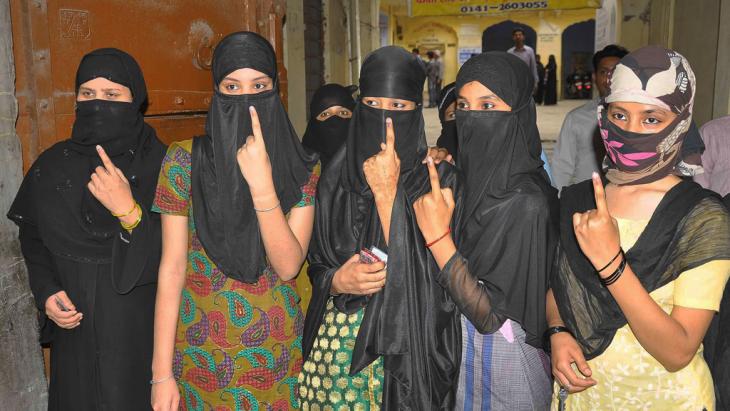 Hopes and fears among members of India's largest minority: according to Amitabh Kundu, Muslims in India "suffer discrimination on the labour market and in the housing sector." Although special programmes have been launched specifically for the Muslim community, they have not brought any tangible improvements for Muslims as a whole

Kundu said that while the average rural Muslim's situation has not changed much, the average urban Muslim's condition is worse than that of other minorities. "They suffer discrimination on the labour market and in the housing sector." Although previous governments have introduced reforms and launched special programmes specifically for the Muslim community, Kundu believes that the implementation of the reforms was mismanaged.

According to Wasiff Khan, the results are often too minimal to be noticed. "We Indians need results and actions; the country needs development, and the poor need basic amenities. If Modi really delivers what he has promised, then we can look beyond the Muslims-Non-Muslims issue."

Prof Mohammed Habib, who teaches Religious Studies at the University of Patiala in the northern state of Punjab, says that there is no denying the fact that there is a lurking fear within the Muslim community. "There has been so much polarisation in the elections this year. It goes to show that the country is not yet mature. Religion continues to play an important role in people's daily life," Habib told Qantara.de. He insists that it is this mindset that allows politicians to exploit people's emotions and mobilise them against each other.

The mood in the country is tense, and Modi is being watched closely. Selma Haider, a teacher in a private school in New Delhi told Qantara.de that she is very sceptical about the future.

"A party that is nationalist is now in power, and that is worrying. India is a secular democracy, and a nationalist – regardless of the religion he belongs to – has no place being in the prime minister's office."

Home
Print
Newsletter
More on this topic
Interview with the political theorist Rajeev Bhargava: "The BJP has to give up its obsession with Muslims"Elections in India: Muslims to play key roleNarendra Modi and the Indian Muslims: Divisive figure could become India's next PM
Related Topics
Democracy and civil society, Muslim minorities, Narendra Modi
All Topics

The USA and NATO plan to withdraw from Afghanistan by September. The operation is risky, the outcome uncertain. Many Afghans fear civil war. The quake on the Hindu Kush will also ... END_OF_DOCUMENT_TOKEN_TO_BE_REPLACED

Freedom of the press is the mortar that binds together a free society. If Indian Prime Minister Narendra Modi’s efforts to de-institutionalise what used to be a dynamic and ... END_OF_DOCUMENT_TOKEN_TO_BE_REPLACED

Surging coronavirus cases in many parts of the world have overshadowed the start of this year's Muslim holy month of Ramadan, with festivities once again curtailed by contagion ... END_OF_DOCUMENT_TOKEN_TO_BE_REPLACED

As Qatar prepares to host the 2022 FIFA World Cup, the country has come under fire for its treatment of migrant workers, with some nations calling for a boycott of the contest. ... END_OF_DOCUMENT_TOKEN_TO_BE_REPLACED

The farmers' protests in India show no signs of abating – despite repressive measures. Government attempts to stigmatise the farmers have only prompted sections of the urban ... END_OF_DOCUMENT_TOKEN_TO_BE_REPLACED

Fanna-fi-Allah is the West's most renowned Qawwali ensemble. It stands out not only for its strong stage presence, but also for its commitment to preserving the centuries-old ... END_OF_DOCUMENT_TOKEN_TO_BE_REPLACED
Author:
Roma Rajpal Weiß
Date:
Mail:
Send via mail

END_OF_DOCUMENT_TOKEN_TO_BE_REPLACED
Social media
and networks
Subscribe to our
newsletter