Those with an address in Juhapura or a Muslim name needn't bother applying for a job in public service, says Menon Trivedi, a Muslim from Ahmedabad. There are many ways in which Muslims are humiliated and treated as second-class citizens, he continues.

"Once they gathered up all the dogs in the city and set them free in Muslim neighbourhoods, primarily here in Juhapura," says Trivedi, a man in his mid-40s. "Everyone in the ghetto feels vulnerable." The sewage pipes aren't serviced, sometimes the stench is unbearable. There are few banks and cash machines, power and water supplies are totally insufficient, he continues.

Gandhi's murderer – hero of the people

"Nathuram Godse was a patriot, is a patriot and will remain a patriot," announced the BJP candidate for Bhopal Pragya Singh Thakur during the election campaign in May. "People who call him a terrorist should instead look within. They'll be given a befitting reply in this election." This quote made the headlines in Indian media, because to this day, such open praise for Gandhi's assassin is seen as overstepping the mark. 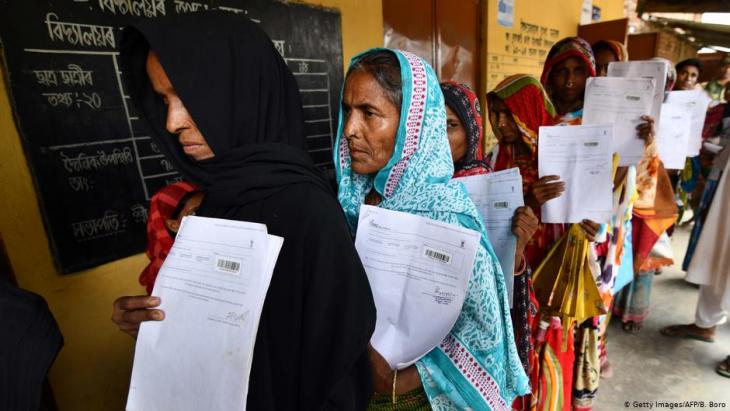 Declared stateless: almost two million people in the Indian state of Assam are threatened with deportation to Bangladesh. According to Indian media reports, the National Register of Citizens (NRC) has declared 1.9 million Muslims living in the region to be illegal migrants. Many of those affected fled to the neighbouring Indian region of Assam in 1971, during the war of independence in what was then East Pakistan – now Bangladesh

The 48-year-old candidate publicly boasted about her involvement in the 1992 destruction of the Babri Mosque in nearby Ayodhya. She is also accused of participating in a 2008 bomb attack that left several Indian Muslims dead. She has therefore already spent nine years in prison and has been free on bail since 2017 – with the final judgement still pending. In spite of this, the BJP put her up as a candidate.

Several party allies and the Prime Minister Narendra Modi merely dismissed her praise for Gandhi's killer without calling for sanctions or her exclusion from the party. The Hindu hardliner, who apologised for her statement with clear reluctance, secured a seat in the lower house with an absolute majority of 60 per cent in her constituency in this year's election.

It may well be that there has not been a repeat of the large-scale pogroms of 2002, which caused international indignation. But since the BJP assumed power there has been an increase in killings carried out by lynch mobs, often over suspicions that beef has been consumed. These actions usually go unpunished and are even justified by some BJP politicians. The murders have created a climate of fear among many of the nation's 200 million Muslims.

There are no signs of an imminent end to the spiral of violence: in fact, what can genuinely be described as a wave of ethnic cleansing is currently in preparation in the north eastern state of Assam. All 35 million inhabitants must prove that they, or they parents, were already living in Assam before 1971. Otherwise they will be stripped of their citizenship. Early September saw the publication of the 1.9 million names of people who had lost their citizenship – most of them Muslims. The authorities have already begun the process of eviction and detention.

As stateless people they will not be able to go anywhere. Neighbouring Bangladesh – a country twice the size of Bavaria with 160 million residents – has already signalled its unwillingness to accept the stateless persons.

Assam is a testing lab and an attack on the Muslim minority in India, just like the withdrawal of Kashmir's special status. Interior Minister Amit Shah has announced his wish to roll out the Assam citizenship checks to the entire country. Amit Shah, who also describes the presumed immigrants as "vermin", has been the closest confidante of Prime Minister Modi's closest confidante for two decades. The Modi government in Delhi has distanced itself from the Gandhi legacy more than any prior administration.

The ''German Khars'' are a family of craftsmen known in Srinagar for their skills repairing old German-made medical equipment. Their craft has been preserved for decades, but ... END_OF_DOCUMENT_TOKEN_TO_BE_REPLACED

Marrying for love is still quite a rare thing in India. Religion often gets in the way, as do caste and parental opinions. After the defamatory term "Love Jihad" started trending ... END_OF_DOCUMENT_TOKEN_TO_BE_REPLACED

With the construction of a controversial Hindu temple in the city of Ayodhya, Indian Prime Minister Narendra Modi is marginalising the Muslim community. With his rhetoric, he is ... END_OF_DOCUMENT_TOKEN_TO_BE_REPLACED

In India, ultra-nationalist musicians are providing a soundtrack for Hindu extremists with songs that glorify violence. The goal is to make the secular and pluralistic country a ... END_OF_DOCUMENT_TOKEN_TO_BE_REPLACED

Dozens of academics, writers and civic activists have been arrested in India on charges of sedition, terrorism and inciting violence. Sruti Bala asks why a country that sees ... END_OF_DOCUMENT_TOKEN_TO_BE_REPLACED

You might expect the advent of a long, bleak winter to bring everything to a standstill in Kashmir, but thanks to ingenious portable earthenware heating pots – kangdi – encased in ... END_OF_DOCUMENT_TOKEN_TO_BE_REPLACED
Author:
Dominik Müller
Date:
Mail:
Send via mail

END_OF_DOCUMENT_TOKEN_TO_BE_REPLACED
Social media
and networks
Subscribe to our
newsletter