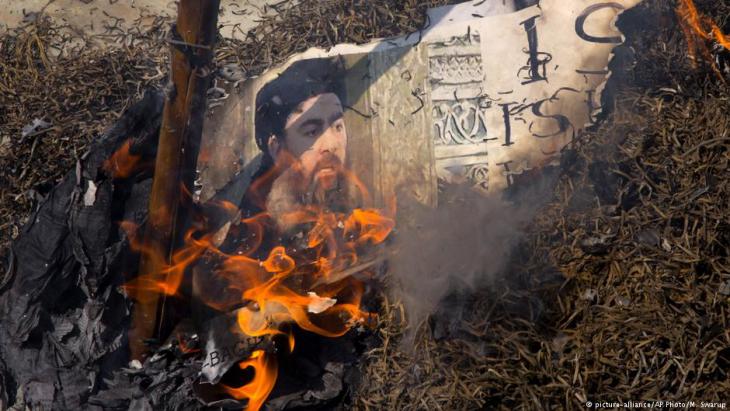 India's resistance to the appeal of IS

In the international statistics documenting terror attacks inspired or orchestrated by the IS terror militia, India is nowhere to be found. And this despite the fact that owing to its demography and socio-economic conditions, the country with its 180 million Muslims should be fertile ground for foreign-controlled Islamist terrorism. By Ronald Meinardus in New Delhi

At the end of May, India's governing party celebrated three years in power – for ministers, an opportunity to take stock. Rajnath Singh, the Home Minister, had good news: "I can say with full confidence that IS until now has failed to find traction in India."

In the case of the overwhelming majority of Indian Muslims, the jihadists′ messages of hatred are evidently falling on deaf ears. Promotional videos with subtitles in the national languages of Hindi, Urdu and Tamil do regularly appear on the Internet; IS leader Abu Bakr al-Baghdadi gave a speech declaring that his organisation aimed to make the Indian subcontinent part of its future global caliphate. But as it would appear, only a comparatively small number of Indian citizens have followed IS calls.

In a speech to parliament, Foreign Minister Sushma Swaraj put the number of those who have "moved to the other side" at 50. In comparison to figures from other nations, where hundreds and sometimes thousands have joined the Arab terror militia, this is a manageable number.

A recent study by the Brookings Institution examines the issue more precisely than the Foreign Minister. In the study, researchers say the number of Indians recruited by IS is 142. Of these, we discover that 132 are known to the authorities by name. The study says the number of recruits has been rising steadily since 2013, but that this trend has now come to a halt. "This suggests that IS has made only scant inroads in India," the experts conclude.

This statement tallies with the official narrative of the government, which has an explanation rapidly to hand: "This is largely because of Indian ethos," says Foreign Minister Swaraj, "where Constitution is secular and even religious leaders in our country only teach about compassion and tolerance. We are anti-violence." 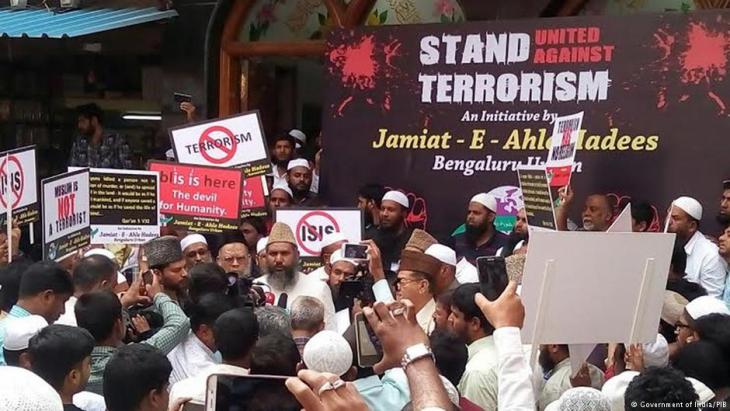 India's success in containing religious militancy is down to its constitution: ″secularism is a guarantor of the far-reaching autonomy of Muslims in matters of faith. The constitution also gives the minority the right to run its own schools: most of the madrassas are administered by the conservative religious establishment. This guards against the Koran schools becoming a gateway for the violently-orientated Islam imported from the Middle East,″ writes Meinardus

Many Indians, first and foremost those of the Muslim faith, would probably disagree with the official picture of interfaith harmony. Relations between the Hindu majority and the Muslim minority bear the burden of history. Politically and societally, India's numerous Muslim community is marginalised; on a local level, attacks and violent clashes are a regular occurrence. Anti-Muslim rhetoric from circles close to the governing Hindu nationalist BJP do nothing to help overcome existing rifts; there are voices that claim the opposite.

But the tensions aren't opening any doors to the jihadists. The placidity of the overwhelming majority of Indian Muslims is a thorn in the eye of the miniscule group of Indian Muslims who are willing to use violent methods: "They're the most shameless Muslims in the world," says Zakir Musa, described by Indian media as an agent of al-Qaida, in an audio message. "They should be ashamed of calling themselves Muslims. Our sisters are getting abused and dishonoured and Indian Muslims keep screaming that Islam is peace."

The response of the Muslim establishment to such abuse wasn't long in coming: "Indian Muslims know how to fight their battles peacefully and find solutions to their problems within the constitutional framework," explained Naveed Hamid from the leading umbrella organisation of Muslim communities in India AIMMM.

Secularism anchored in the Indian constitution

The reference to the constitution is a key explanation of the success of the Indian state in the containment of religiously-inspired militancy. Secularism is a constitutional principle and guarantor of the far-reaching autonomy of Muslims in matters of faith. For Indian Muslims, the valid personal status law is Sharia. A conservative clergy maintains a hawk-like presence to ensure that time-honoured Islamic traditions are upheld when it comes to laws regulating marriage, inheritance and divorce.

The constitution also gives the minority the right to run its own schools: most of the madrassas are administered by the conservative religious establishment. This guards against the Koran schools becoming a gateway for the violently-orientated Islam imported from the Middle East.

Accordingly, the terror network has transferred its recruitment strategy entirely to the digital sphere. India's security agencies view the Internet as the key source of the Islamist threat. Facebook, WhatsApp and Twitter are a veritable stomping ground for IS propagandists and seen as the contact point for recruiters. Indian newspapers regularly report on how online enrolment works. Often, the liaison officers are diaspora Indians who live in Arab regions where they have fallen into the clutches of IS and now want to entice their compatriots back home. 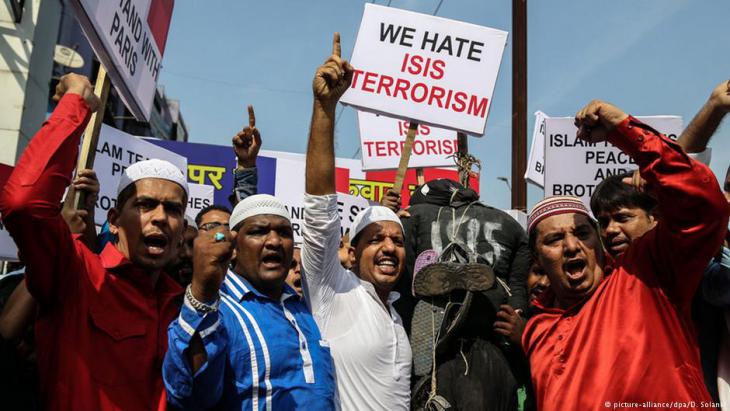 A recent study by the Brookings Institution found the number of Indians recruited by IS to be 142, 132 of whom are known to the authorities by name. Although the number of recruits has been rising steadily since 2013, the study says that this trend has now come to a halt. "This suggests IS has made only scant inroads in India," the experts conclude

The Indian state has responded with a series of counter measures. In early May, the anti-terror group in the business metropolis Mumbai announced that over the past two years, they have prevented 60 young people from joining IS. "Most of the youths get radicalised online," explains a security official. "ISIS operatives get in touch with them and try to lure them into their territory or make them ready for line wolf attacks."

Advice rather than punishment for potential recruits

Preventing radicalised Muslims from travelling to the Arab world is a core element of the Indian anti-terror strategy. This strategy includes treating those detained or convicted for doing so with kid gloves and not like dangerous criminals. "Our aim is to send them back to the mainstream and make sure that they do not feel victimised," an anti-terror officer is quoted as saying in by Indian media. Support in the form of advice, instead of punishment, is the authorities' maxim when dealing with potential IS recruits, most of whom are youngsters.

The Indians are drawing on the experience of other governments with what are termed de-radicalisation programmes for Islamist threats. When India's Prime Minister Narendra Modi meets his counterparts, counter-terrorism is always on the agenda. This was the case recently during his Berlin visit and will certainly also be the case when the Indian head of government makes an official visit to Israel early in July. The co-ordination and exchange of experience in counter-terrorism have long been a priority of India's foreign policy.

Meanwhile, 17-year-old Abdur Raheman from Uttar Pradesh has just learned a hard lesson. Together with four other Muslims, the young man was detained by a special commando only to be allowed to go a short time later. The Times of India quotes the Koran student with the words: "I will be more careful about who I accept on my friends' list on Facebook from now on."

Home
Print
Newsletter
More on this topic
India and Islamic State: Everything under control?India and "Islamic State": Indian Muslims not heeding the siren call of ISIndia and Pakistan: Unable to bury the axe
Related Topics
'Islamic State' | IS, Islam in Southeast Asia, Mysticism | Sufism, Radicalisation
All Topics

Fanna-fi-Allah is the West's most renowned Qawwali ensemble. It stands out not only for its strong stage presence, but also for its commitment to preserving the centuries-old ... END_OF_DOCUMENT_TOKEN_TO_BE_REPLACED

Arundhati Roy's recent volume of essays and lectures provides an eye-opening account of current political developments in India. Written during the run-up to the last general ... END_OF_DOCUMENT_TOKEN_TO_BE_REPLACED

The ''German Khars'' are a family of craftsmen known in Srinagar for their skills repairing old German-made medical equipment. Their craft has been preserved for decades, but ... END_OF_DOCUMENT_TOKEN_TO_BE_REPLACED

Marrying for love is still quite a rare thing in India. Religion often gets in the way, as do caste and parental opinions. After the defamatory term "Love Jihad" started trending ... END_OF_DOCUMENT_TOKEN_TO_BE_REPLACED

With the construction of a controversial Hindu temple in the city of Ayodhya, Indian Prime Minister Narendra Modi is marginalising the Muslim community. With his rhetoric, he is ... END_OF_DOCUMENT_TOKEN_TO_BE_REPLACED

In India, ultra-nationalist musicians are providing a soundtrack for Hindu extremists with songs that glorify violence. The goal is to make the secular and pluralistic country a ... END_OF_DOCUMENT_TOKEN_TO_BE_REPLACED
Author:
Ronald Meinardus
Date:
Mail:
Send via mail

END_OF_DOCUMENT_TOKEN_TO_BE_REPLACED
Social media
and networks
Subscribe to our
newsletter