Fatwas promoting the death penalty for perceived acts of blasphemy are rare in Indonesia. Yet a number of religious commentators have argued that moderate Islam in Indonesia is only a myth of the past. Akh Muzakki takes a look at the development of recent years 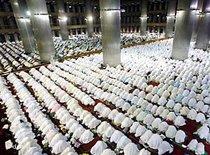 ​​On 30 November 2002, Muslims across Indonesia were celebrating the closing days of their month-long fast. It was the final week of the holy month of Ramadan. That week, however, was marked by the release of a fatwa, or opinion on religious law. The fatwa came from the Religious Scholars Forum of the Indonesian Muslim Community (FUUI) in Bandung, West Java.

FUUI had delivered their decision in response to an article written by Ulil Abshar-Abdalla, the coordinator of the Liberal Islam Network (JIL). The article, entitled 'Refreshing Our Understanding of Islam', had been published nearly two weeks earlier in the popular Indonesian language newspaper Kompas.

FUUI declared that Ulil's article was blasphemous and that according to Islamic law such an offence was punishable by death. Fatwa promoting the death penalty for perceived acts of blasphemy are rare in Indonesia, so the impact of the FUUI announcement was dramatic.

All the more so because it was issued during Ramadan, a month devoted to peace and good will among Muslims.

Why had Ulil's article provoked such an intense reaction? In his article, Ulil strongly criticised the religious understanding of some Indonesian Muslims. He stated that some groups had 'fossilised' Islam by unconditionally accepting an understanding of Islam as it was practiced in seventh century Arabia.

They allowed no room for reinterpretation. In his view, the interpretation of Islam which these groups propagate has led to stagnation within Islam. He argued that Islam should be perceived as a living organism; something which grows and develops.

He maintained that Islam does not promote 'divine laws'. Rather, it develops universal principles the application of which may change with time and place.

Ulil's article, and the subsequent fatwa, sparked a heated debate among Muslim scholars and leaders across the country. Not surprisingly, the strongest criticism of JIL came from FUUI, a small group of conservative Islamic leaders and activists. Their view was that Ulil had been deliberately provocative and attacked the basic principles of religion: God, Islam, the Prophet Muhammad, Muslim scholars, and the Muslim community in general.

On these grounds, FUUI argued, he deserved to die.

FUUI pointed out that according to Islamic law a death penalty can be issued for any act of humiliation directed towards the teachings of Islam.

Athian Ali M Da'i, the chair of FUUI and one of those responsible for issuing the fatwa, said in response to Ulil's article that, 'being a Muslim, my blood boiled.'

Eleven months before FUUI issued their fatwa, JIL had already been the target of criticism. This criticism was most vehement in a book entitled The Dangers of Liberal Islam. The author of the book was Hartono Ahmad Jaiz, one of the key Muslim thinkers behind the Indonesian Council for Islamic Proselytising, or DDII.

In highlighting the danger of JIL, Hartono had raised the issue of the death penalty in the opening sections of his book.

In the months following the release of the book, the argument for the death penalty against JIL members was developed within the pages of Media Dakwah, a publication of DDII. Over the course of 2002, the publication ran numerous pieces under the same title as Hartono's book.

Gatra, a weekly news magazine, suggested that Hartono's statements about the death penalty against the JIL activists made early in 2002, along with the ensuing barrage of criticism against JIL in Media Dakwah, culminated later in the year in the fatwa issued by FUUI.

The rather extreme reaction of FUUI and DDII to an interpretation of Islam with which they did not agree may seem surprising. Indonesia has long been regarded as a nation whose Muslim population is tolerant and inclusive.

However, incidents such as FUUI's fatwa and DDII's ongoing discussions about applying the death penalty for heresy indicate that some groups do not wish to tolerate all views and, in fact, strongly oppose them.

These extreme responses raise a fundamental question. Why has there been such open confrontation between Indonesian Muslims in a nation that has long been known for its moderate and tolerant convictions and practices?

Looking further back into the history of Islam in the archipelago, we find previous examples of contestation between various groups of believers, including the issuing of death sentences.

During the initial process of Islamisation in Java, the walisongo (the nine revered Muslim saints who brought Islam to Java in the fifteenth century) delivered a fatwa calling for the death penalty for Syekh Siti Jenar. Syekh Siti Jenar, who was indeed put to death, was accused of spreading heresy among the Muslims of Indonesia.

But that was a long time ago. A death penalty fatwa is quite new in the context of modern Indonesia. And it is not the only indication that the nature of Indonesian Islam as moderate and peaceful may be at a crossroads.

No longer an isolated incident

In 2005, another fatwa was released, this time by the Indonesian Council of Muslim Scholars (MUI). MUI issued a fatwa against the followers of Ahmadiyah, a Muslim sect, asserting that the organisation was propagating heretical teachings about Islam.

This fatwa was actually a re-assertion of a fatwa MUI had issued against Ahmadiyah in 1980. It did not mandate the death penalty, but it did state that Ahmadiyah was heretical. Unlike the fatwa against Ulil, however, this fatwa was acted upon.

On 9 July 2005 a mob destroyed part of the Ahmadiyah compound in Parung, West Java. Less than a week later, media sources reported that thousands of people armed with sticks had descended on Ahmadiyah's headquarters in Pondok Udik, Bogor, West Java demanding the dissolution of Ahmadiyah.

The local police were forced to evacuate around 200 Ahmadiyah followers to the police station in Cibinong.

Where are the moderate Muslims?

It is generally believed that radical Islam has only a small following in Indonesia. But perhaps this notion has been promoted in order to dismiss a worrying reality. Have Indonesian Muslims been radicalised during the transitional period following Suharto's authoritarian rule?

A number of religious commentators have argued that moderate Islam in Indonesia is only a myth. They go so far as to argue that law-abiding Indonesians can never hope to be free from the destructive powers of radical Islam and their fatwa. JIL activist Hamid Basyaib even argues that what has been known as 'the moderate group' now amounts to basically nothing.

These sentiments, however, would seem to be an over-reaction. The process of democratisation in Indonesia is still in its infancy. And despite isolated calls from groups like FUUI and DDII, Indonesians are already enjoying more freedom of speech than they have for several decades.

There are also arguably unprecedented levels of protection of human rights. Indeed, while there was some public criticism of Ulil's article, only a tiny minority of Indonesian Muslims supported the responses of FUUI and DDII.

Both the small membership of FUUI and the limited circulation of Media Dakwah are testament to the fact that these organisations do not represent the majority of Indonesian Muslims.

The large moderate Islamic organisations, such as Nahdlatul Ulama (NU) and Muhammadiyah, have led campaigns to educate Indonesian Muslims about the dangers that radicalisation of socio-religious life can bring.

These organisations have openly rejected radical teachings that endanger human rights and tolerance. These efforts must be supported by a commitment on the part of the government to ensuring equal rights for all citizens.

Indonesians must be allowed to practice their religious beliefs freely but responsibly. While fatwa proposing death penalties for blasphemy are not supported by the large majority of Indonesian Muslims, they do impinge on the rights and the safety of individuals and organisations who simply wish to practice their newly acquired rights to freedom of expression and freedom of religious belief.

This article was previously published in Inside Indonesia, 01/2006.

Akh Muzakki teaches at the State Institute for Islamic Studies (IAIN) in Surabaya. He is a graduate of the Australian National University.

Islamism in Indonesia
Democracy's Enemy Within
Indonesia's Justice and Prosperity Party, PKS, threatens Indonesia with ballots more than bullets, writes Sadanand Dhume. It shares the radical beliefs of Egypt's Muslim Brotherhood and threatens the nation's success in a globalizing world

END_OF_DOCUMENT_TOKEN_TO_BE_REPLACED
Social media
and networks
Subscribe to our
newsletter