Skip to main content
Indonesia Assesses the Legacy of Suharto

Human rights activists say Indonesian President Suharto was a ruthless dictator, while other Indonesians credit him with the country's economic upswing. Two years after the death of the long-time ruler, the nation has begun considering his legacy. Jochen Buchsteiner reports 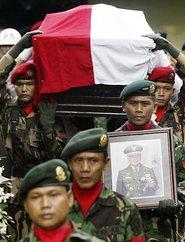 As time goes by, many Indonesians are adopting a more conciliatory view of their former leader, writes Jochen Buchsteiner. But during Suharto's Iron Fist rule thousands of political opponents lost their lives. Suharto's burial on 28 January 2008

​​Long-time ruler Suharto died a thousand days ago, and because the Javanese love their numbers and are superstitious, bereaved relatives arranged a ceremony last Friday. During that ceremony, a marble crown intended to adorn the mausoleum slipped out of the carrier's hand and fell to the ground. Owing to the soft carpeting on the floor, it did not break. But Indonesia's soothsayers are now uneasy: is the commemoration of Suharto such a good idea these days?

The question is currently being addressed in a similar way on a political level. For the first time in 12 years, Indonesia is conducting its own appraisal of the man that ruled the nation for such a long period. The debate was triggered by an application to include the dead autocrat in the official pantheon of national heroes. The proposal was originally made by local politicians from the district where Suharto was born, and where he was buried. The final decision lies with a committee at the Ministry for Social Affairs, which is considering a list of ten candidates.

Many of the names on the list are uncontroversial, among them several independence leaders as well as former President Abdurrahman Wahid ("Gus Dur"), who until this death last December had been the pre-eminent voice of liberal Islam. But the legacy of Suharto, who left his political mark on the nation over a period of 32 years, is much more complex. 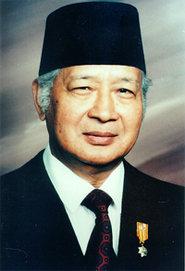 Legacy of the "Smiling General": In East Timor, which Suharto illegally annexed, up to 200,000 more people died. Today, many Indonesian's feel that his dictatorship gave the country stability

​​Human rights activists perceive him as a corrupt dictator, who manipulated the public, instigated a pogrom against Communists and gagged his critics. Only in the aftermath of the "Asia Crisis", which seriously afflicted the Indonesian economy, was the reform movement able to force the leader's resignation in 1998.

As time goes by, many Indonesians are adopting a more conciliatory view of their former leader, who almost always had a smile on his face. In the provinces, where the roots of Suharto's former state party Golkar still remain strong, he continues to be revered as the "father of development". Also in the cities, sometimes even among young, freedom-loving Indonesians, people are making noises of goodwill. Suharto's iron fist, they say, gave the country stability and if nothing else thwarted the expansion plans of the Islamists, who are profiting from the new freedoms that accompanied the introduction of the democratic system.

Getting used to democracy

The discussion is a reflection of more profound insecurities in the face of this democratic system, which is still going to take some getting used to. In spite of increasing prosperity, annoyance at the corrupt behaviour of state institutions is growing. In addition to law enforcement authorities, criticism is primarily being aimed at parliament, a body equipped with far-reaching powers. Critics do however sometimes overlook the fact that every instance of corruption cannot be ascribed to dwindling moral values. There has always been nepotism, but this is only now being uncovered with the help of an investigative free press.

According to Transparency International, Indonesia's parliament is the nation's most corrupt institution: insiders report of decisions made in exchange for cash

​​Nonetheless parliament is making little effort to dispel these concerns. Since the start of the legislative period a year ago, it has passed just seven laws, most of them in the furtherance of its own interests. Members of parliament aim to authorise the construction of a new, luxurious building, and set up special funds that will benefit them personally. Travel expenses of more than €2,000 per day are also now under scrutiny. Demonstrators besieged Jakarta airport before the departure to Athens of the "Ethics Committee" – a group that by its own account is conducting a study into the "ethics of the Greek parliament".

Transparency International says parliament is the nation's most corrupt institution. Insiders report of decisions made in exchange for cash and a lack of interest in the subject matter of any legislation that has nothing to do with financial investments. Political scientist Rock Gerung describes parliament in Jakarta as a "black market for political transactions", and says that people no longer have any faith in the institution.

But the criticism has not yet led to either complete despair at the system, or a bout of forgetfulness when it comes to recent history.

In a poll conducted by the Indonesian Survey Institute LSI last week, 70% of those questioned – more than ever before – described democracy as the best form of government for Indonesia. And a majority ascribed the country's current ills, first and foremost corruption, to the political legacy of Suharto.

On the Death of the Indonesian Dictator Suharto
Shadow of the Past
Suharto had ruled Indonesia for 32 long years. Even now, the country is still bearing the weight of Suharto's legacy: a corrupt administration system and an overblown military. By Sybille Golte-Schröder

Press Freedom in Indonesia
Conservative Victory over Press Freedom
The former editor-in-chief of Indonesian Playboy magazine has begun a two-year prison sentence for "public indecency". And this in a country with the some of the most liberal media laws in Asia – since the toppling of Suharto. By Anett Keller

60 Years of Independence
Indonesia's Hard Road to Democracy
The signing of the Aceh peace settlement practically coincides with the 60th anniversary of Indonesia's independence from Dutch colonial rule. Sybille Golte on the country's stony path to democracy

END_OF_DOCUMENT_TOKEN_TO_BE_REPLACED
Social media
and networks
Subscribe to our
newsletter