The provocative work of Indonesian artist Arahmaiani is critical of Islam and the increasing Islamization of Indonesia. But this devout Muslim artist does not spare the West her critique of capitalism. Christina Schott reports 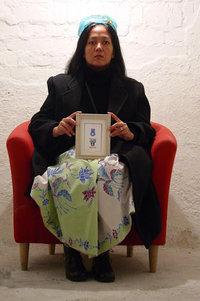 Agitating against all forms of political, religious and social injustices – Arahmaiani is a key figure in the current art scene in Indonesia

​​If the Indonesian artist Arahmaiani gets it her way, at the G8 Summit in Heiligendamm, Germany, this June giant Arabic letters will appear on the steel wall meant to protect high-ranking politicians from the rest of the world. "Allah" will be written on the wall in the form of colorful, over-sized pillows.

"This wall reminds me of the wall between Israel and Palestine. But the word Allah means love – and that's what I want to remind people of," says Arahmaiani, who is Muslim. It is as yet unclear if she will receive permission to carry out the project.

"Stitching the Wound" is a recent work by Arahmaiani, a painter and installation/performance artist. Last August she presented the giant pillow installation at the Jim Thompson House in Bangkok. At the opening a cake was served in the shape of the Arabic letters for "Allah."

Investigation by the religion police

While the exhibition in Buddhist Thailand did not command much attention, a few months earlier in Islamic Malaysia Arahamiani was under investigation by the religion police because she broke a plate with the word Allah on it during a performance. 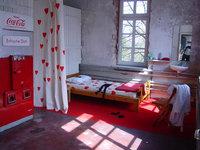 ​​In her own country, the Indonesian artist's critical voice is well-known for agitating against all forms of political, religious and social injustices – especially when it comes to the rights of women.

Arahmaiani was born in the West Javanese city of Bandung. Her father, an Islamic scholar, expected his daughter to pray five times a day and learn the Koran by heart. Her mother's family, on the other hand, practiced "Kejawen" – a typical Javanese combination of animist, Hindu and Islamic traditions. Without her father's knowledge, Arahmaiani learned shadow plays and other traditional arts from her mother's relatives.

"These contrasting traditions confused me as a child. But over time I have unconsciously combined the two religious cultures and today I believe that my childhood experiences were inspiring," says the 46-year-old artist.

An experience when she was eight changed her life. Arahmaiani's father asked her what she wanted to be one day and she answered: a prophet. Her father explained to her that only men can be prophets. "I realized then that men and women do not have an equal status in Islam. I was deeply disappointed," recalls the artist, who lives without a family today. "So I stuck to my mother's rule that women should never be dependent on a man."

Since then, Arahmaini has often been confronted with the fact that having an independent opinion can be dangerous. Already in the 1980s as an art student she became acquainted with the secret police of the then-ruling Suharto regime. After a performance in which she criticized the military, she was held for a month and just barely escaped landing in the infamous camp for political prisoners.

In 1994 she had her first run-in with Islamic fundamentalists. She received death threats following an exhibition titled "Sex, Religion and Coca-Cola." Her work "Etalase" showed the Koran next to a condom and a bottle of coca-cola.

While the extremists in Jakarta ranted about the condom, a few years later the organizers of a roving exhibition in the United States were concerned that the cola bottle next to the Koran might incite anger. In 1998 "Etalase" finally came to New York after having been forbidden elsewhere in the US.

Critical stance towards all sides

"I have always criticized both sides – Islam as well as capitalism," says Arahmaiani. "September 11 did nothing to change this." And the problems she encounters with her art have also not changed. For the same reasons given nine years ago, her now infamous "Etalase" could only be shown in New York this year as part of a collective exhibition on "Global Feminism"; it was once again banned elsewhere in the US.

"What has changed for me personally since then is the expectation that I choose sides. But I want to hold on to my critical stance towards all sides. I see this as a new challenge," says Arahmaiani, who has also experienced the waves of phobias since September 11.

In 2002 she was interrogated all night by the American immigration authorities and then held in a hotel room under surveillance by several men. The paradoxical reason for this action: she is a Muslim woman. This experience inspired an installation shown at the 2003 Biennale in Venice, in which the artist is seen reading the Koran in a bed with sheets covered in hearts and a Coca-Cola vending machine beside it.

"Very few artists in Indonesian dare to address Islam in this way. It's a shame, but I can also understand," says Arahmaiani.

In recent months the globe-trotting artist has been concentrating on a collaboration with an Islamic school in Central Javanese Yogykarta, where she would like to teach art. "The world of Islamic students is very isolated. They must open up to the world or they will experience culture shock. The consequences can be fatal," says the artist. "I find the Islamicization occurring in Indonesian today very alarming. More and more provinces are adopting Sharia laws, which I find threatening especially as a woman. I would like to fight against this."

Religious Censorship in Indonesia
When Art Becomes a Sin
Indonesian artist Agus Suwage appears to have involuntarily put his country's values to the test. Is his artistic installation pornographic or are critics just oversensitive? The stakes for Indonesian society are high: freedom of expression or religiously justified censorship? Christina Schott reports

Sharia in Indonesia
Narrow-Mindedness versus Diversity
The introduction of Sharia-based regional laws in several Indonesian provinces has aggravated the sociopolitical climate in the world's most densely populated Muslim country. Yet it has also aroused resistance, as Christina Schott from Jakarta reports

END_OF_DOCUMENT_TOKEN_TO_BE_REPLACED
Social media
and networks
Subscribe to our
newsletter