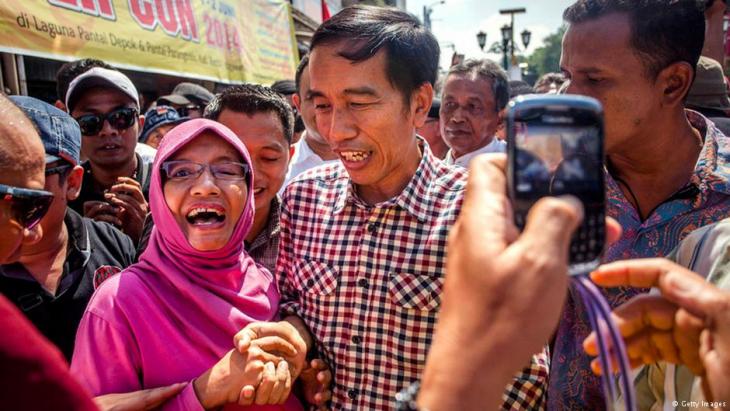 The two candidates in the forthcoming presidential elections in Indonesia could hardly be more different. Prabowo Subianto, former son-in-law of the late dictator Suharto, has adopted a militaristic style, and likes to present himself as a strong leader, while social democrat candidate Joko Widodo is seen as a man of the people and establishment outsider. Christina Schott examines their chances

"Two fingers salute!" shouts the presenter on the stage outside the Sultan's Palace in Yogyakarta. A huge and diverse crowd is gathered in front of him: it includes rickshaw drivers, dragon dancers, palace employees, women's groups, all of whom are now raising their hands in the air in the victory sign and singing: "Don't forget to vote Jokowi!" That's the chorus of the popular "dangdut"-style anthem "Two Fingers Salute for Presidential Candidate Jokowi", recorded by Indonesia's most famous rock band, Slank, along with actors and friends from the music industry.

The song campaigns in favour of the presidential candidate Joko Widodo, alias Jokowi, who is running for election on 9th July 2014 on ticket number 2. Solidarity rallies are being held for him all over the country. These are voluntary events and, unusually for election events in Indonesia, participants are not paid to attend.

Man of the people

Two weeks before the ballot, people in the Central Javanese cultural metropolis Yogyakarta are in festive mood as the hiphopper Marzuki Mohamad, alias Kill The DJ, launches into his song "Unite to Vote for Number 2". "What does Indonesia need? Honest, simple, hard-working: support Jokowi! He may be thin and come from a village, but he is upright and he gives us hope. Jokowi is one of us."

No ballot since the country's democratisation in 1998 has seen Indonesia's intellectual elite get as politically involved as these presidential elections. The reason is this 53-year-old forestry engineer and furniture entrepreneur, who made a name for himself as a politician for the little people, first as mayor of the Central Javanese city of Surakarta and then, since 2012, as governor of the capital, Jakarta. His unannounced visits to poorer residential areas, traditional markets and fairs have helped Jokowi win the hearts of many simple Indonesians. He is seen as a hard worker and, above all, he is regarded as not corrupt.

If elected, Jokowi would be the first president of Indonesia with no professional or family connections to the former dictator Suharto's authoritarian regime. Political analysts are speaking of a turning point for Indonesia's democracy. For their part, Jokowi and his supporters talk of a "mental revolution" that they say will lead to greater tolerance and a transparent government in the country, which is currently plagued by corruption and legal uncertainty.

The Javanese Jokowi, who usually makes public appearances wearing a simple checked shirt, is the presidential candidate of the Indonesian Democratic Party – Struggle (PDI-P), supported by the nationalist parties Nasdem and Hanura and the moderate Islamic National Awakening Party (PKB). At his side is former vice-president Jusuf Kalla, an experienced statesman and influential functionary in various organisations including Nahdlatul Ulama, the country's largest Muslim organisation, which represents a moderate form of Islam.

When he was nominated in March of this year, Jokowi seemed destined for a landslide victory. However, only four months later the scenario is very different. The once so popular Social Democrat can no longer be sure of getting a majority. The main reason for this is a major smear campaign by his opponents. 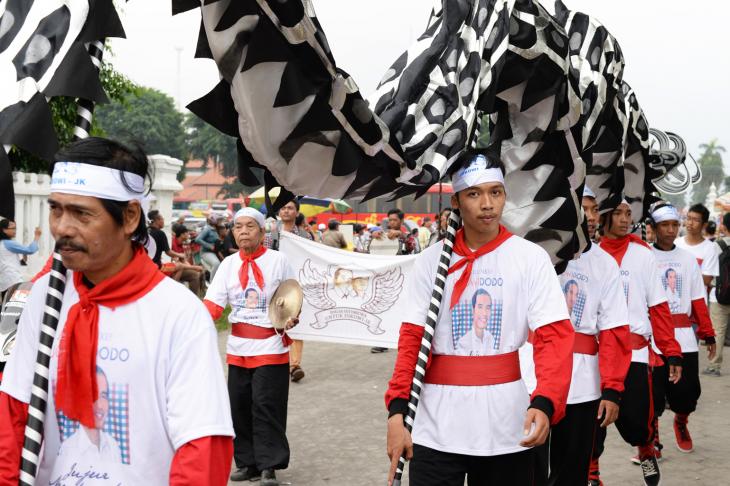 Hoping for an end to corruption and legal uncertainty: Supporters of the populist presidential candidate Joko Widodo, known as Jokowi. He's seen as a man of the people, and as such his election rallies usually resemble an Indonesian folk festival

They claim that, as a member of the secular PDI-P, he deliberately worked only with Christian representatives in both Surakarta and Jakarta, promoting mainly non-Muslim minorities. His opponents say this means he is not a good Muslim, and is not suitable to govern the country with the world's largest Muslim population. Some media have even spread the rumour that Jokowi is actually of Chinese origin, a minority despised by many Indonesians. By contrast, the fact that Jokowi has already made five trips to Mecca usually goes unmentioned.

The rumour mill really got going when Jokowi refused to make advance promises of ministerial posts to several Islamic parties and the former Suharto party Golkar in the event of a possible coalition. The Islamic parties PAN, PBB, PKS and PPP were unable to nominate a suitable candidate of their own, due to poor results in April's parliamentary elections. Instead, along with Golkar, the second-largest faction in parliament after Jokowi's PDI-P, they united behind the only other promising candidate: Prabowo Subianto, Suharto's former son-in-law and a former lieutenant-general in the Indonesian army, who is accused of bearing responsibility for brutal human rights violations against regime opponents during the transitional era at the end of the 1990s. Strangely, his religious allies are bothered neither by these accusations nor by the fact that Prabowo's mother was Christian.

With his own party Gerindra ("Great Indonesia Movement"), which Indonesian media like to call "religious-nationalist", Prabowo Subianto promises the voters a better future under his firm leadership. He has made numerous statements to the effect that he considers the current democratic system in Indonesia too lax and wants to introduce tighter structures. He also says he wants to reduce foreign influence over the Indonesian economy and politics. At election campaign events, his appearance is often military to martial, sporting bright white shirts and arriving on horseback or by helicopter. At rallies and on posters he poses in the style of Soekarno, the idolised founder of the republic whose deputy, like Prabowo's, was named Hatta. 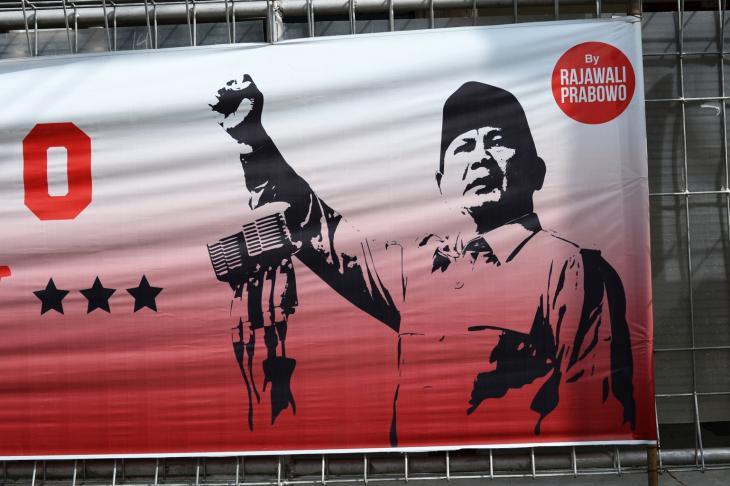 Offering the people strong leadership: Prabowo Subianto has the support of an alliance of Islamist parties and the former party of the late dictator Suharto. He is promising to bring order to a country in chaos. Subianto was allegedly responsible for brutal human rights abuses during his time as head of Suharto's security forces in the 1990s

There is a music video supporting him, too. To the tune of Queen's "We Will Rock You", four pop stars sing "Prabowo-Hatta, Indonesia awaken, who else should make the country rise up out of its misery?" while holding aloft the national symbol, a mythical bird called the garuda. In the video, the singer Ahmad Dhani, a judge on the "Indonesian Idol" TV show, stomps about in sunglasses wearing an imitation of Heinrich Himmler's SS uniform. The video unleashed a storm of protest, whereupon Prabowo's election team distanced itself from the makers.

"I think it's cool. The video expresses exactly what I think," says Fauzi Aminuddin. A former businessman, he has been working as a taxi driver in Jakarta since his company went bankrupt. Despite the economic improvements in his country, he is pessimistic about the future. The infrastructure is too unsound, the education system too poor, he says. "Indonesia needs a strong man at the top – and that can only be someone with a military background. Jokowi is far too weak and inexperienced to sort out the chaos in this country."

Meanwhile, Prabowo supporters are creating more chaos in Yogyakarta, to coincide with the pro-Jokowi event at the Sultan's Palace. Wearing black masks, members of the militant Islamist United Development Party (PPP) wave green flags bearing images of the Kaaba as they roar around the city in motorcycle convoys. That evening, they destroy a PDI-P post and get embroiled in street battles with equally hot-headed young men from the "red" party. With the start of Ramadan, this kind of violence was suspended.

However, Prabowo's Gerindra party announced that it intended to continue the campaign in the mosques – despite an express warning from the election monitoring authority that election campaigning is banned in places of worship. If the presidential race is as close as polls are predicting, many Indonesians anticipate troubled times ahead.

"Prabowo and his allies have a lot of money to buy votes with. If he wins, we'll go back to the Suharto regime," comments Butet Kartaredjasa, probably Indonesia's best-known comedian and political satirist. "Once Prabowo's in power, he won't simply step down again. But Jokowi is honest. He listens to the people. He stands for democracy. Now is our chance – we won't get another candidate like him!"

Research project "The Global Qur'an", brainchild of Professor of Islamic Studies Johanna Pink and sponsored by the European Research Council, analyses the history and ... END_OF_DOCUMENT_TOKEN_TO_BE_REPLACED

At a time when even some rich democracies are electing con men as their political leaders, the success of Indonesian President Joko Widodo deserves wider acclaim and appreciation ... END_OF_DOCUMENT_TOKEN_TO_BE_REPLACED

On the Indonesian island of Java, one librarian has started a mobile library, lending books to children in exchange for plastic rubbish. The idea is that they will learn to take ... END_OF_DOCUMENT_TOKEN_TO_BE_REPLACED

Water buffalo and oxen have been part of the work in Indonesian fields for centuries. But the draught animals are no strangers to sport either, as can be seen in two traditional ... END_OF_DOCUMENT_TOKEN_TO_BE_REPLACED

According to the latest Reuters tally, more than 2.54 million people are now reported to have been infected by the novel coronavirus globally and 177,004 have died. As Muslims ... END_OF_DOCUMENT_TOKEN_TO_BE_REPLACED
Author:
Christina Schott
Date:
Mail:
Send via mail

END_OF_DOCUMENT_TOKEN_TO_BE_REPLACED
Social media
and networks
Subscribe to our
newsletter