The Regulation of Faith by the State

The Indonesian Constitutional Court has endorsed the country's controversial blasphemy law, which many liberal politicians and human rights activists regard as a relic of the past that could further exacerbate religious tensions. Christina Schott reports from Jakarta 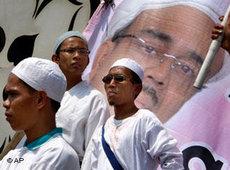 Targeted by the radical Islamic Defender Front: Religious minorities like the Ahmadis, who do not conform to orthodox concepts of Islam, are particularly affected by the blasphemy law

​​ "Infidel!" "Let us spill his blood!" These were the kind of threats Indonesian director Garin Nugroho had to endure in early April this year.

In his capacity as a cultural expert, he testified before the highest constitutional court of his country that a 45-year-old blasphemy law wholly discouraged Indonesians from discussing religion, as it did not allow them the freedom to hold their own opinions.

"This law is the biggest setback for democracy and pluralism in the history of our nation," the internationally-acclaimed filmmaker declared. The followers of various radical Islamic organizations, such as the Islamic Defender Front (FPI) or Hizb-ut Tahrir Indonesia (HTI), who were waiting outside the courthouse, were able to follow his testimony on a screen. They were clearly of a different opinion.

Validation for the hardliners

Nugroho got off lightly, however, in that he was only verbally abused. Four other experts were beaten and kicked on their way to court. The judges upheld the disputed paragraphs nonetheless. With only one vote against, the nine-person body decided in April that the old law was not unconstitutional and was "indispensable for religious harmony in the country".

A coalition of Indonesian human rights groups under the leadership of the Wahid Institute had applied for a legal revision of the blasphemy law. In their opinion, the law, introduced after a coup attempt in 1965, contradicts the Indonesian constitution, which guarantees religious freedom. 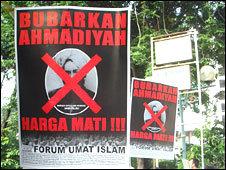 Verdict of religious intolerance: The upholding of the 45-year-old blasphemy law could further exacerbate interreligious tensions on the island republic

​​ Six religions are officially recognized in Indonesia, which has the largest Muslim population in the world: Islam, Protestantism, Catholicism, Hinduism, Buddhism and Confucianism. Followers of minority religions, such as Sikhs or animists, are tolerated, but those who do not profess one of the six official religions cannot hold an identity card or obtain a marriage certificate.

In practice, it is not possible to be an atheist in Indonesian society. Divergent religious orientations within the recognized religions also face difficulties. According to the blasphemy law it is illegal to publish, recommend or even seek public support for non-orthodox interpretations of faith.

As a result, interpretations of Islam that do not accord with either the Sunni or the Shia faiths are subject to legal prosecution – and all too often they are also persecuted outside the law.

Persecution of the Ahmadi

Adherents of the Ahmadiyya movement, who consider themselves Muslims but do not believe that Mohammed was the last prophet, have been particularly badly affected.

Many Ahmadis had to go into hiding after violent attacks by radical Islamists. On the island of Lombok hundreds of families are still living in refugee camps because they daren't return to their home villages. Instead of punishing the attackers, the government forbade all public activities related to Ahmadiyya Islam.

"Religious freedom will always be restricted, because if it is unrestricted it could compromise the freedom of the majority," says Saleh Daulay, the secretary for law and human rights of Muhammadiyah, the second-largest Islamic organization in the country. "It is our duty to protect the established belief of a majority from interference. If we didn't have the blasphemy law, we would no longer have any basis from which to prevent social unrest." 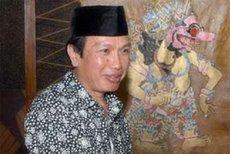 "The blasphemy law is not going to solve the religious conflicts in this country!" - Masdar Farid Mas'udi, legal expert for the Nahdlatul Ulama (NU)

​​ In practice, the law has primarily been applied in Indonesia to punish offences against the main streams of Islam. As well as sect-like groups like the Ahmadis, individuals have also increasingly been targeted. In May 2006, for example, the Muslim woman governor of Banyuwangi in East Java was nearly ousted from office after being accused of practising a religion other than Islam. The background to this was that she was married to a Hindu.

In December 2008 a Christian primary school teacher was arrested on the Moluccas because she was said to have made disparaging remarks about Islam during class. On the basis of this rumour alone, hundreds of furious Muslims destroyed 67 houses, a church, and a meeting hall. Five people were injured. Only two of the rioters were arrested.

No resolution of religious conflicts

"The blasphemy law is not going to solve the religious conflicts in this country," stated legal expert Masdar Farid Mas'udi of the Nahdlatul Ulama (NU), Indonesia's largest Islamic organization, in the daily newspaper Jakarta Post.

"The court should have defined the terms blasphemy and heresy more precisely. If you follow the current interpretation, Islamic preachers should in fact also be criminalized for their diatribes against other religions."

Mas'udi, however, is pretty much alone in his opinion. Both his own organization, the NU, which is regarded as moderate, and Muhammadiyah joined the radical Islamists in speaking out against a repeal of the blasphemy law. The Parisada Hindu Dharma Indonesia (PHDI), Indonesia's highest Hindu council, and the Indonesian Buddhist Council (Walubi) were also in favour of retaining it.

The only vote against the court's decision came from constitutional judge Maria Farida Indrati, who one month earlier was also the only one in the body to oppose another highly controversial law, that against pornography.

In her opinion, the blasphemy law is a product of the past and is no longer compatible with today's constitution – especially in respect of the preservation of human rights and religious freedom.

"Officially, we have religious freedom in Indonesia, but in reality it's not that free," says Dwi Nurdianto (not his real name), who works for a social organization in Yogyakarta on Java.

"On paper I am a Muslim, although I am in fact an atheist. But I'm not allowed to be an atheist here. If I don't belong to any religion, I can't get official papers. And if certain people came to know my true beliefs, what would happen would be something like the scenes in front of the constitutional court. The state should really be protecting minorities from persecution. Instead, it's arguing that it has to protect the majority."

Liberal Islamic Networks in Indonesia
A Counter-Movement to Political Islam
In recent years Indonesia has seen the development of a network of various Muslim NGOs that convey a contemporary understanding of Islam, working to counter the advance of Islamization

END_OF_DOCUMENT_TOKEN_TO_BE_REPLACED
Social media
and networks
Subscribe to our
newsletter