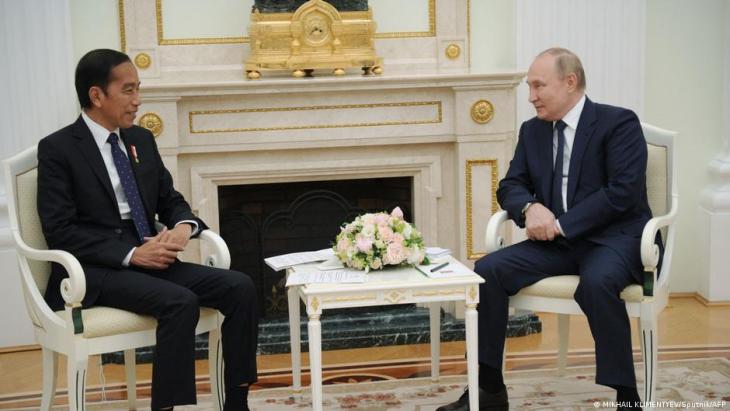 Indonesia's ties with Russia and the West
Jokowi's tightrope walk

With its traditions of neutrality and non-alignment, Indonesia has had to tiptoe around the Ukraine war debate. Pro-Russia sentiment in the region complicates Jakarta's foreign policy challenges. By David Hutt

In what some pundits considered mere image politics, Indonesian President Joko Widodo visited Kyiv and Moscow three weeks ago, becoming the first Asian leader to do so since Russia invaded Ukraine in February.

Widodo, who is more commonly known as Jokowi, used his visits to Kyiv on 29 June and Moscow the following day to focus on the global food supply crisis caused by the Ukraine war.

"Indonesia would like the war to end soon, and the supply chains of food, fertilisers and energy need to be restored immediately because it affects the lives of hundreds of millions and even billions of people," Widodo reportedly said in Moscow.

Before he jetted off to Europe, he stated that his visits "are not only important for Indonesians, but also for other developing countries in order to prevent the people of developing and low-income countries from falling into extreme poverty and hunger."

Before the war, Indonesia was the world's second-largest importer of Ukrainian wheat. It also has a high dependence on Russia and Ukrainian-produced fertilisers and other agricultural products.

In Southeast Asia, the war in Ukraine has resulted in spiking oil prices and soaring inflation. Whether Widodo's visits achieved anything to tackle the surging prices remains to be seen. 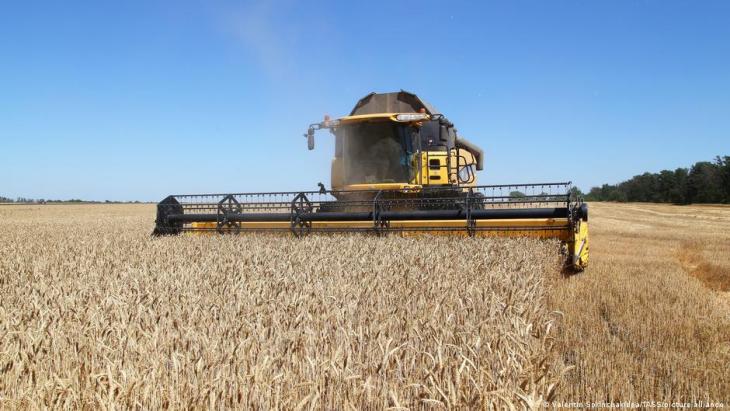 "Before the war, Indonesia was the world's second-largest importer of Ukrainian wheat. It also has a high dependence on Russia and Ukrainian-produced fertilisers and other agricultural products. In Southeast Asia, the war in Ukraine has resulted in spiking oil prices and soaring inflation. Whether Widodo's visits achieved anything to tackle the surging prices remains to be seen," writes David Hutt

"Trips like this are often more about symbolism than substance," said Ben Bland, director of the Asia-Pacific programme at Chatham House and the author of "Man of Contradictions: Joko Widodo and the Struggle to Remake Indonesia".

Widodo visited Kyiv before Moscow, which some have interpreted as a subtle nod in support of Ukrainian independence. But by publicly discussing the potential food supply crisis while in Russia, Widodo was "implicitly pushing back on the false Russian narrative" that the West is to blame for the food crisis, said Bland.

Paving the way for the G20 summit?

For some, however, Widodo's ill-suited figure as a peacemaker was intended primarily for his domestic audience.

"Indonesians see Jokowi being praised and recognised on the international stage. This instills a strong sense of national pride, as Jokowi is seen to embody a stronger Indonesia," said Bridget Welsh, an analyst at the University of Nottingham Malaysia's Asia Research Institute.

As the world's fourth-most populous country, Indonesia played the role of first among equals in Southeast Asia up until the 1990s. Since then, however, its leaders have drifted towards isolationism.

Widodo cannot sit quietly this year – even if he wanted to: Indonesia holds the rotating presidency of the G20 grouping and is expected to involve itself in global issues.

The G20 leaders' summit, which is due to take place in Bali in November, could be a dud as Widodo has defied Western pressure to exclude Russian President Vladimir Putin. 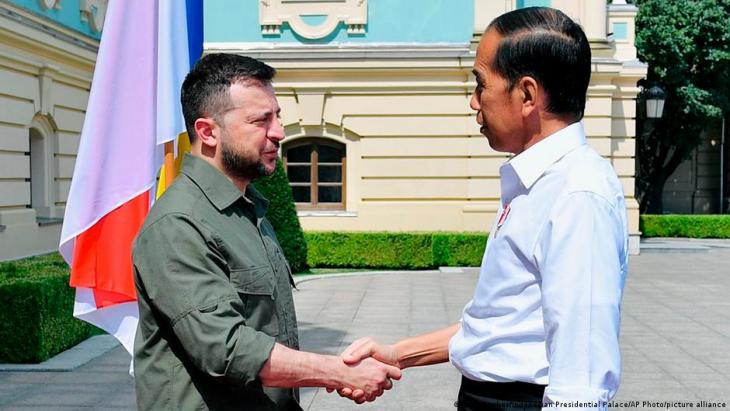 According to Ben Bland, director of the Asia-Pacific programme at Chatham House, the fact that Widodo visited Kyiv before Moscow is interpreted by many as a subtle nod in support of Ukrainian independence. Pictured here, Indonesian President Joko Widodo (right) is greeted by Ukrainian President Volodymyr Zelenskyy, Kyiv, 29 June 2022

He has also invited Volodymyr Zelenskyy, the Ukrainian president, and analysts reckon Jakarta is betting on Putin and Zelenskyy participating virtually at the conference, which may be enough to forestall a threatened US and European boycott of the summit if Putin shows up.

An embarrassing G20 summit would put additional strains on Indonesia's place in world affairs, especially as it will take over the reins of the rotating chairmanship of the Association of Southeast Asian Nations (ASEAN) for 2023 around the same time as the G20 summit in Bali.

With its traditions of neutrality and non-alignment, Indonesia has had to tip-toe around the Ukraine war debate.

In March, Indonesia voted in favour of a UN General Assembly resolution that condemned Russia's invasion of Ukraine and called for a withdrawal of Russian forces. But it has refused to impose sanctions on Moscow or clearly condemn Putin's actions in Ukraine.

Jakarta has been more careful in its unilateral and bilateral diplomatic statements, said Bland.

"This reflects Indonesia's relatively good relationships with both Ukraine and Russia before the invasion, its longstanding tradition of non-alignment, and its wariness of being drawn into conflicts further afield when it faces so many challenges at home," he added.

The 1955 Bandung Conference in Indonesia was an important precursor to the creation of the Non-Aligned Movement, a Cold War-era alliance of neutral states. 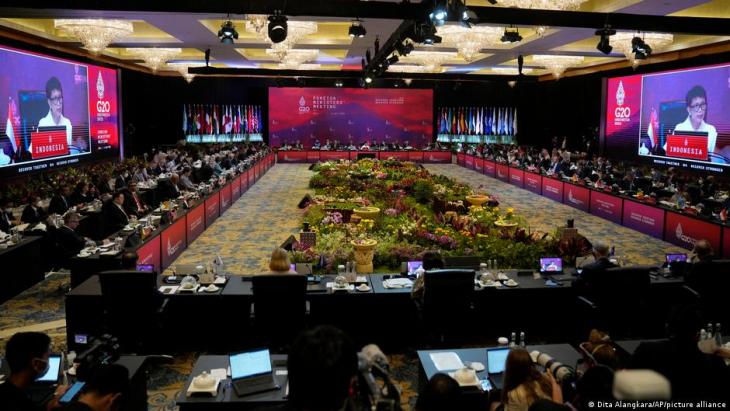 Although Widodo has stuck closely to Indonesia's historic policy of non-interference, he must tread carefully as public opinion is decidedly non-neutral on the issue of the Ukraine war, according to recent polls.

"There is a large share of Indonesians who see the West as provoking the war. A neutral stance appeases this view," said Welsh. "Most Indonesians do not see benefits from taking a position on a war so far away from Indonesia," she added.

Large support in Indonesia for ties with Russia

The recently released Democracy Perception Index 2022, conducted by Berlin-based marketing company Latana in collaboration with the non-profit organisation Alliance of Democracies, asked respondents from 52 countries across the world if they think their governments should cut economic ties with Russia over Moscow's invasion of Ukraine.

In Indonesia, net support for keeping ties with Russia was almost 50%, the second-highest of the 52 countries surveyed. Only the Chinese were more in favour of maintaining relations.

Radityo Dharmaputra, an Indonesian analyst, has written that "a dominant strand in Indonesian discussions of the Russian war on Ukraine has focused on American and Western hypocrisy."

In an article published in March, he concluded that this is "more about disdain for the West rather than wholehearted support for Russia's actions."

Calls for an environmentally-conscious form of Islam are growing in Indonesia, as climate change poses enormous ecological challenges for the country. Experts say it could change ... END_OF_DOCUMENT_TOKEN_TO_BE_REPLACED

Indonesia has become a primary battleground between democratic and autocratic visions of Islam in the 21st century, with Nahdlatul Ulama pitted against Abdullah bin Bayyah, a ... END_OF_DOCUMENT_TOKEN_TO_BE_REPLACED

Research project "The Global Qur'an", brainchild of Professor of Islamic Studies Johanna Pink and sponsored by the European Research Council, analyses the history and ... END_OF_DOCUMENT_TOKEN_TO_BE_REPLACED

At a time when even some rich democracies are electing con men as their political leaders, the success of Indonesian President Joko Widodo deserves wider acclaim and appreciation ... END_OF_DOCUMENT_TOKEN_TO_BE_REPLACED

On the Indonesian island of Java, one librarian has started a mobile library, lending books to children in exchange for plastic rubbish. The idea is that they will learn to take ... END_OF_DOCUMENT_TOKEN_TO_BE_REPLACED
Author:
David Hutt
Date:
Mail:
Send via mail

END_OF_DOCUMENT_TOKEN_TO_BE_REPLACED
Social media
and networks
Subscribe to our
newsletter