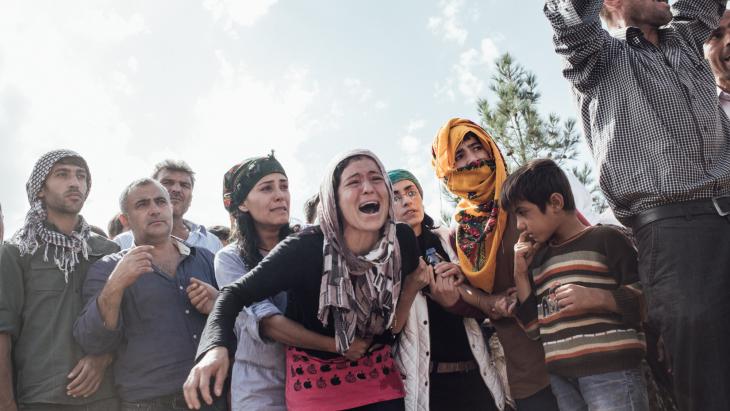 Inside Kobani
The political game and the humanitarian crisis

The city of Kobani in northern Syria has been under seige from Islamic State (IS) for over a month now. In recent days, Turkey has allowed a military convoy of Iraqi peshmerga and Free Syrian Army fighters to pass through its territory en route to Kobani. However, the peshmerga are arriving relatively late in the day. Thousands of Kurds from Syria, Turkey and Iraq have already joined the YPG and are in Kobani defending the city. They may all be fighting the same enemy, but they are certainly not united among themselves. By Kiran Nazish in Erbil

In mid October, there was an unlikely gathering in the the centre of Erbil, the capital of Iraqi Kurdistan. Flags of the Kurdistan Workers' Party (PKK) and banners in support of its leader, Abdullah Ocalan, could be seen in the huge throng of Iraqi, Turkish and Syrian Kurds who had converged on the city to show their support for Kobani.

Some were also there to welcome and carry the bodies of dead Iraqi fighters brought back from Kobani. Despite the fact that the fighters in question had been local Iraqi Kurds, the Kurdish government had prohibited the bodies from being brought to the city centre. "They fear these heroes will inspire others to join the PKK," said Wasiq Ali, an Iraqi Kurd who, together with his two brothers, joined the PKK after receiving military training from the party.

In all, hundreds of Iraqis have been trained by the PKK in the mountains. These fighters originally intended to join the peshmerga, the Kurdish fighters in northern Iraq, but then decided it was more important to prevent Kobani from falling into the hands of IS. For several weeks, the Iraqi Kurds did not seem interested in helping Kobani. Then, in late October, the peshmerga decided to join the fight. 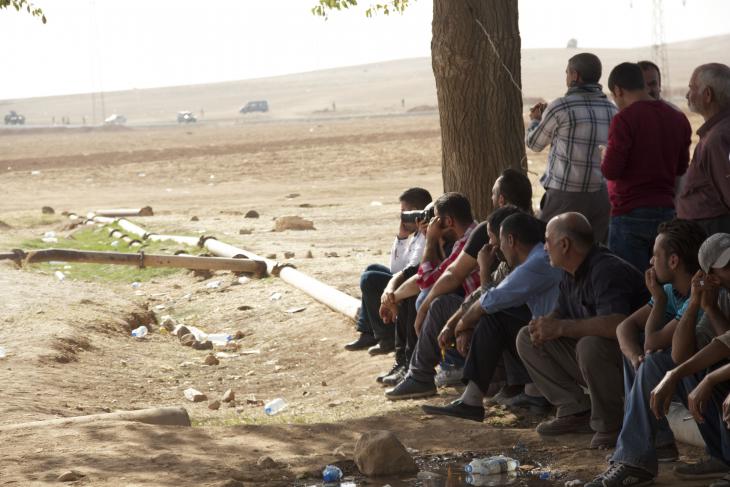 Syrian and Turkish Kurdish fighters wait at the Turkish border for their chance to cross over into Kobani. The Turkish military and police had been stopping fighters from joining the battle for Kobani from Turkish soil. However on 20 October, the Turkish PM announced that Turkey would let the peshmerga cross the border to assist the local Syrian Kurds fighting against IS

Meanwhile, many Iraqi Kurds who indicated that they intended to join the fight in Kobani without the consent of their local parties came under considerable pressure. "We are considered to have betrayed Barzani," said Wasiq Ali, speaking of the president of the autonomous Iraqi Kurdistan Region, Massoud Barzani. "Any support for the PKK in Iraqi Kurdistan is a hush-hush subject," Ali told Qantara.de.

According to Ali, there are small local parties in Iraqi Kurdistan that have ties to the PKK, but they are much less powerful and autonomous than the Kurdistan Democratic Party that rules the region. Hasan Khalil (34), another Iraqi supporter of the PKK says, "We know that the PKK is much more organised than the peshmerga. It will take a lot of time and practice for the peshmerga to get up to the level of the PKK, but the problem is that the peshmerga are supported by Turkey and the international community and is much more wealthy, while the PKK is in hiding and struggling for resources."

The PKK has been named a terrorist organisation by Turkey and much of the international community, making it controversial in Iraq, where the Iraqi peshmerga are the absolute military power.

"For more than a month, when Turkey resisted taking action, it exerted pressure on the international community to refrain from helping the YPG fight in Kobani," says Tarek Doglu, an Ankara-based foreign affairs analyst. "The US eventually decided to help despite Turkey's resistance. It still took a while for US airstrikes to attack IS, dealing a heavy blow to the militants on the ground in Kobani."

Meanwhile, the YPG – the military wing of the Democratic Workers Party (PYD), an affiliate of the PKK in Syria – was fighting Islamic State alone. In other words, the main Syrian Kurdish fighting force in the town, the Kurdish YPG, has close links to the outlawed PKK, which has fought a 30-year insurgency in south-east Turkey. "This was the core reason why Turkey was reluctant to help; it thought it would help its enemy thrive," says Soli Ozel, a leading analyst in Istanbul.  But many Kurds from Turkey, Syria and Iraq who felt Kobani needed to be saved, joined the YPG, despite the fear of being harassed by their respective governments. 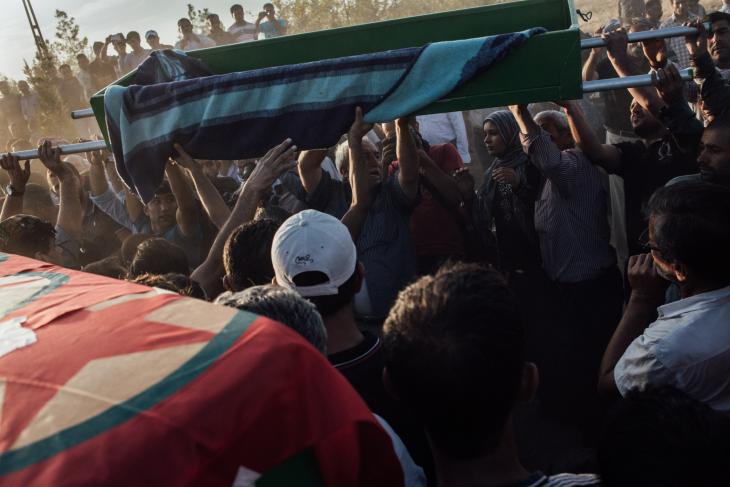 The funeral of YPG fighters killed in Kobani. Throughout much of October, there have been funerals almost everyday in Suruc, where Kurds gather to mourn the dead, while many others take pledge to join the fight

Kobani then and now

YPG fighters, volunteers from Turkey and a handful of civilians left inside the city told Qantara.de how IS's progress into the city had been slowed with the help of US airstrikes. IS had made smart advances, destroying vehicles and infrastructure in an attempt to misguide drones and US airplanes by creating smoke clouds. Eventually they pulled out, stealing from buildings and torching them as they went.

Firas Kharaba, who has been managing the return to Turkey of many wounded fighters from Kobani, told Qantara.de that Turkey has not always been fully co-operative. "We never know when they will allow the injured to enter Turkey and when they won't. At least 50 YPG fighters have bled to death on the border because the Turkish military did not let them in."

He said, however, that the YPG had improvised in the battle with IS and claimed that some Syrian loyalists had been working as spies within IS and providing the YPG with intelligence. "We have gotten remarkably useful information from our spies, who told us details of specific buildings and hideouts where Daesh would hide or gather for meetings," he told Qantara.de.

Kurdish fighters who are injured inside the beleagered city receive little medical attention. "All the hospitals have been destroyed; we are now working from makeshift clinics, sometimes on trucks with little facilities," Dr Shokri Mehmoud, one of the 15 doctors in Kobani, told Qantara.de.

Ali Hassan is 17 years old. His father, a member of the PKK, told him to leave Kobani. Ali was not himself a fighter, but helped in other ways. Ali told Qantara.de that although the PKK is trying to help as much as it can, the fight is being led by the YPG with some assistance from the Free Syrian Army (FSA). Most reports from within Kobani do not mention the PKK at all for fear that it could draw attention away from those willing to help, including the US. 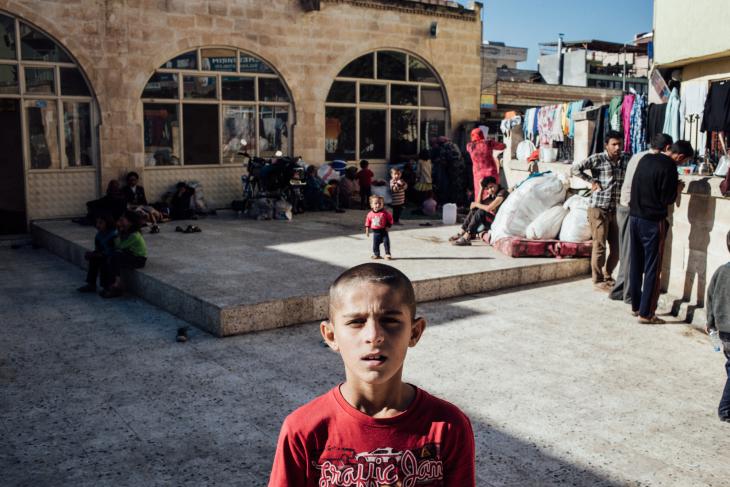 A Syrian refugee child stands outside a mosque that is now used as a makeshift camp hosting about 42 syrian refugee families. Many mosques, schools, wedding halls, shops and empty plots have been given away by Turkish Kurds to provide shelter for their Syrian Kurdish brothers from Kobani

Will the Peshmerga help?

In the fierce fighting that has raged in the city since 19 September, the YPG has received tremendous public support, with thousands of fighters joining it from Syria, Turkey and Iraq, including women and the elderly. Although the YPG has insisted that it could save Kobani,  most of the international community remained skeptical. After all, the YPG did not have enough weapons to fight IS, which has seized vast swathes of land in Iraq and Syria this summer.

Hundreds of lives have been lost in recent weeks, but the Kurdish fighters continued a stubborn battle with IS. On 20 October, Turkish Prime Minister Ahmet Davutoglu unexpectedly announced that Turkey would allow Iraqi peshmerga fighters to enter Kobani and assist the Kurdish fighters defending the city. Across the board, the Kurds were elated at the news. However, it was a full week after the announcement before the peshmerga began entering the city.  This delay in action caused skepticism among the Kurds in Kobani; Iraqi Kurds have a history of opposing complete independence for Syrian Kurds.

"We do need help in this fight, but what if the Iraqi peshmerga come to help us and then plan to stay here? That would not be acceptable," says Fariq Mami, a Kurdish YPG commander in Kobani. Kurds who have been trying to establish Syrian Kurdistan, fear that the Iraqi Kurds, who are much stronger and wealthier, will impose themselves on Kobani. "While Massoud Barzani, the leader of Iraqi Kurdistan, has always opposed the idea of an independent Syrian Kurdistan, our concern is genuine," says Fariq Mami.

Home
Print
Newsletter
More on this topic
Turkey, IS and the Kurds: Powder keg on the Turkish-Syrian borderTurkey, IS and the Kurdish conflict: "Kobani is now everywhere"Interview with Turkish politician Sirri Sureyya Onder: The solution to the Kurdish conflict as a yardstick for democracyThe fight against IS: No alternative to civil and human rights in the Arab world
Related Topics
'Islamic State' | IS, Abdullah Ocalan, Human rights, Humanitarian aid, Kurdish-Turkish Conflict, Kurds, PKK, Syrian Civil War
All Topics

Very different Western reactions to the suffering in Ukraine and the Arab world show that there is a profound rift among cultures. Essay by Michael Young END_OF_DOCUMENT_TOKEN_TO_BE_REPLACED

From the Euphrates to the Mekong, dams that ensure one country's water supply risk leaving others parched. But shared water resources can be a source of peace as well as conflict ... END_OF_DOCUMENT_TOKEN_TO_BE_REPLACED

Muqtada al-Sadr, the biggest winner in the recent election, aspires to implement great change in Iraq, but reform is easier said than done, writes Massaab al-Aloosy. Correcting a ... END_OF_DOCUMENT_TOKEN_TO_BE_REPLACED

With spring, migration on the Balkan route is on the rise again – and with it the misery, violence and illegal pushbacks at Croatia's external EU border. ... END_OF_DOCUMENT_TOKEN_TO_BE_REPLACED

Much effort is being put into rebuilding churches in Iraq that were destroyed by Islamic State. The message of hope is for Christians to return. Judit Neurink reports from Mosul END_OF_DOCUMENT_TOKEN_TO_BE_REPLACED

In Iraq – which has suffered four decades of conflict and years of political and economic turmoil – separating and recycling waste has yet to become a priority for most people. ... END_OF_DOCUMENT_TOKEN_TO_BE_REPLACED
Author:
Kiran Nazish
Date:
Mail:
Send via mail

END_OF_DOCUMENT_TOKEN_TO_BE_REPLACED
Social media
and networks
Subscribe to our
newsletter