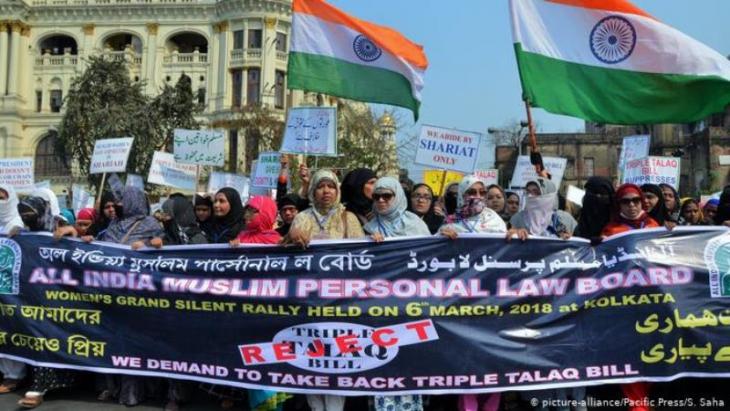 Supporters of the practice argue that the issue has deliberately been made controversial by Modi's BJP. They say that Hindu nationalists want to interfere in Islamic faith and practices with the aim of homogenising India. S. Q. R. Ilayas, a member of the All India Muslim Personal Law Board (AIMPLB), dubbed the bill "very dangerous". "Who will take care of the wives and children once the husband goes to jail?" he questioned.

Fanna-fi-Allah is the West's most renowned Qawwali ensemble. It stands out not only for its strong stage presence, but also for its commitment to preserving the centuries-old ... END_OF_DOCUMENT_TOKEN_TO_BE_REPLACED

Arundhati Roy's recent volume of essays and lectures provides an eye-opening account of current political developments in India. Written during the run-up to the last general ... END_OF_DOCUMENT_TOKEN_TO_BE_REPLACED

The ''German Khars'' are a family of craftsmen known in Srinagar for their skills repairing old German-made medical equipment. Their craft has been preserved for decades, but ... END_OF_DOCUMENT_TOKEN_TO_BE_REPLACED

Marrying for love is still quite a rare thing in India. Religion often gets in the way, as do caste and parental opinions. After the defamatory term "Love Jihad" started trending ... END_OF_DOCUMENT_TOKEN_TO_BE_REPLACED

With the construction of a controversial Hindu temple in the city of Ayodhya, Indian Prime Minister Narendra Modi is marginalising the Muslim community. With his rhetoric, he is ... END_OF_DOCUMENT_TOKEN_TO_BE_REPLACED

In India, ultra-nationalist musicians are providing a soundtrack for Hindu extremists with songs that glorify violence. The goal is to make the secular and pluralistic country a ... END_OF_DOCUMENT_TOKEN_TO_BE_REPLACED

END_OF_DOCUMENT_TOKEN_TO_BE_REPLACED
Social media
and networks
Subscribe to our
newsletter