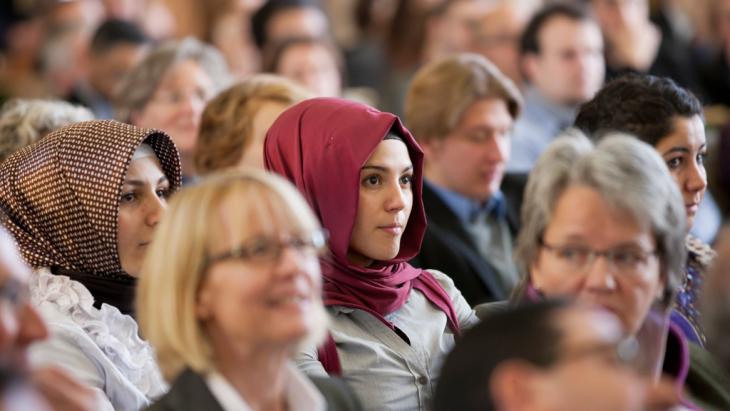 Integration in Germany
Finally growing up

Attitudes and approaches to integration in Germany have changed a lot over the past 20 years. During this period, Germany has gone from a denial that it is a country of immigration to a concerted effort to improve integration. Aladin El-Mafaalani takes a closer look at what has changed

Was the integration of migrants better 15 or even 30 years ago than it is today? No. Although migrants and their children are still some way off enjoying the same status in education and on the jobs market as those who are known in Germany as "organic Germans", people with a migratory background are making their mark on all professions today. They are no longer the exception to the rule.

Just ten years ago, this would have been inconceivable. What's more, opportunities for participation are improving year on year, also for people of Turkish origin – something that is not least attributable to achievements in political and social integration. But at the same time, the tone of public discourse is being shaped by a diametrically opposed public perception. Why? 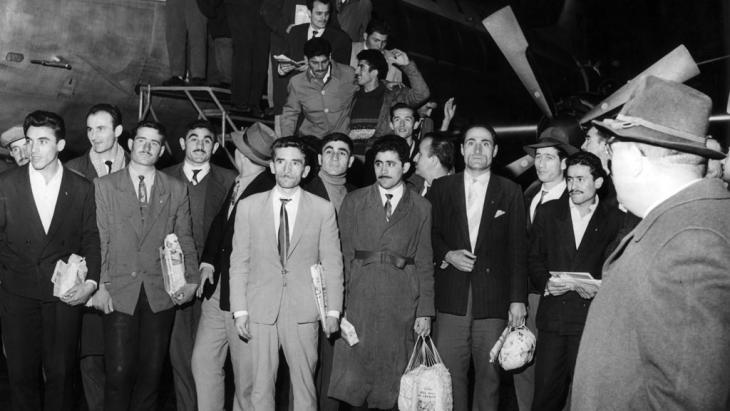 They came for a year and stayed much longer: the Turkish guest workers pictured here arriving at Düsseldorf Airport on 27 November 1961 were the first of 400 workers to sign up for a year of work in Germany. Many more followed over the years

Two different ideals competed with each other well into the 1990s. One ideal had it that Germany was under no circumstances a country of immigration and that guest workers should return to their native countries or should become Germans as if by some kind of assimilation magic. Advocates of the second ideal beat the drum for a sort of multiculturalism cult where cultural diversity under one roof was seen as something great.

Although these two positions are extremely different, they are in fact identical in certain key aspects. Both agree on three things: firstly, that no action needed to be taken to integrate migrants, and secondly, that the so-called majority society did not have to change. Thirdly, both standpoints assumed that a conflict-free society in harmony and in balance is the ideal. It is this last idea in particular that continues to have a lasting impact.

These ideals changed around the turn of the millennium. An appreciation that Germany was a country of immigration prevailed. As a result, everyone realised the need for a proactive policy on immigration. Interfaith dialogues and integration summits were organised, commissioners for migration and integration installed, integration prizes awarded and educational programmes launched.

At political level it also became increasingly clear that not only had society changed over the past 50 years, it would also continue to do so in the future. As a result, many positive developments have occurred within a very short space of time.

But the public discourse on the issue to date paints a very different picture. This can be explained on the one hand by the many crises that occurred between 2001 and 2011 and on the other, by the ever-prevailing naïve-romantic ideal of harmonious immigration societies. 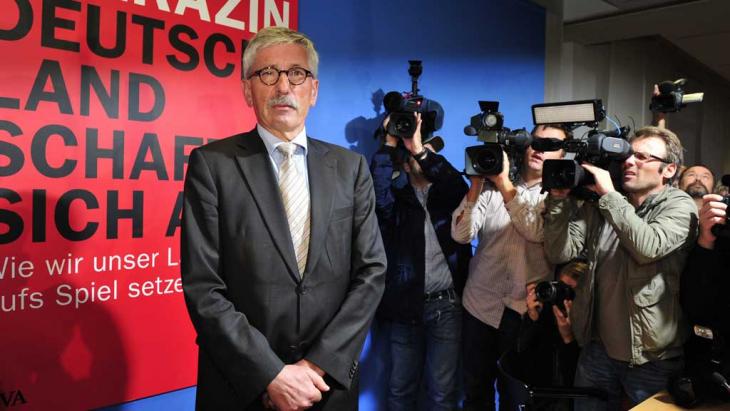 Thilo Sarrazin, member of the Executive Board of Germany's Bundesbank caused a media storm when he published his controversial book "Deutschland schafft sich ab" (Germany is abolishing itself). According to Aladin El-Mafaalani, tension levels had been rising for over a decade before Sarrazin released his book in 2010

A decade of mounting tensions

The implementation of overdue integration policies and the first public debate on migration and integration took place during a decade brimming with turmoil in the educational and social sectors as well as on the European stage, all of which had little to do with migration. In 2001, for example, the land of poets and thinkers was hit by a shock result in the PISA education study. Since 2005, the Hartz IV reform of the labour market has become synonymous with the dismantling of the welfare state. 2007 saw the start of a crisis that was initially referred to as the "financial markets crisis" and by 2010 at the latest was known as the "euro crisis" or "EU crisis". The glowing vision of Europe's future lost some of its lustre. Past, present and future became precarious.

Remarkably, the fact that Germany is flourishing economically helps little. Thilo Sarrazin's book "Deutschland schafft sich ab" (Germany is abolishing itself) didn't appear until the second half of 2010. Tension levels had been rising for over a decade before boiling over in the debate unleashed by Sarrazin.

In the same period, both Islamist and right-wing extremist terrorist groups were striking terror into people's hearts. After the year 2000, the digital revolution intensified media competition, which in turn led to increasingly polarised news coverage. This all served to turn up the heat in the discourse, and understandably create a climate of insecurity, cultural fear and a sense that huge demands were being made on the majority society. Too many positive self-images of this majority society had begun to show cracks. 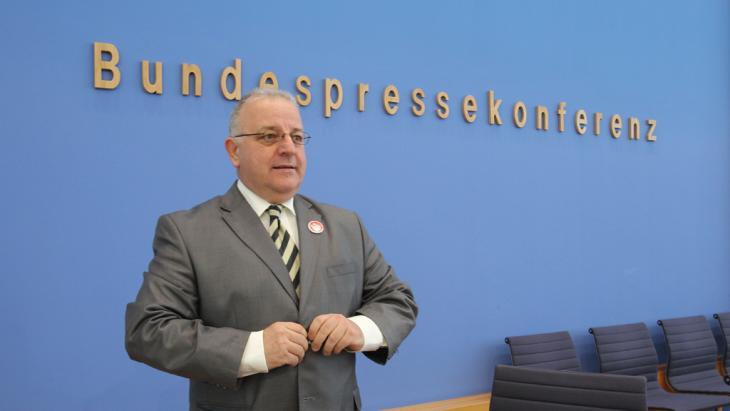 Bridge between the politicians and the people: Kenan Kolat is a member of Germany's Social Democratic Party and chairman of the Turkish community in Germany. He is pictured here at the press conference where he presented a bill on political participation for immigrants on 27 May 2013

Moving away from the romantic ideal?

In addition, public opinion continues to hold fast to the idea that successful integration policies result in a harmonious society. But this assumption intensifies the discrepancy between measurable integration and everyday perception. After all, the more migrants are successful within the education system and participate in the jobs market, the more visible their foreignness. If women wearing headscarves are a more frequent sight, this is not because there are more of them. A headscarf dispute only arises when students or graduates wear one and want to work in elevated professional positions.

Whereas several years ago, Claudia Roth of the German Green Party was still one of the only politicians standing up for the interests of particular minorities, today she is joined in this endeavour by people like the social democrat Kenan Kolat, who holds dual Turkish and German citizenship, and Aiman Mazyek, the German-born chairman of the Central Council of Muslims in Germany. They conduct their lobbying activities in a German manner but present their own standpoints. This is just as much a manifestation of integration as the fact that the future presenter of the late evening news bulletin on Germany's main public broadcaster and the current Minister of State for Integration are both children of guest workers from Turkey.

Distributional wrangling and conflicts of interest do not increase despite successful integration, but because of it, because many more people want to participate and are able to do so. It is not a sign of successful integration when people allow themselves to be told how to live, but when they play an independent and confident role in the process, formulate their own demands and raise objections. If they are dealt with in a constructive fashion, the resulting conflicts can lead to social progress.

Germany's immigration society is growing up. As anyone with children knows, puberty is not a conflict-free time, but an important phase. At present, however, there appears to be a great need for a harmonious sense of well-being – not for nothing is Germany's untouchable chancellor nicknamed "Mutti", or "Mummy".

Dalia Hatuqa is an experienced journalist who has reported on the Israeli-Palestinian conflict from Ramallah, Washington DC and Amman. A writer for Time Magazine, Foreign Affairs ... END_OF_DOCUMENT_TOKEN_TO_BE_REPLACED

Since President Abdul Fattah al-Sisi seized power in Egypt in 2013, he has ruled the country with an iron fist. Civil society, opposition and free press struggle to survive. Tens ... END_OF_DOCUMENT_TOKEN_TO_BE_REPLACED

Many Turks are dissatisfied with the international status of their country. At the same time, opinion polls reveal great scepticism among the Turkish population towards the USA. ... END_OF_DOCUMENT_TOKEN_TO_BE_REPLACED

The German government is planning to legalise cannabis before the end of this legislative period. So what does Islam have to say about its consumption? Will changing the law alter ... END_OF_DOCUMENT_TOKEN_TO_BE_REPLACED

END_OF_DOCUMENT_TOKEN_TO_BE_REPLACED
Social media
and networks
Subscribe to our
newsletter