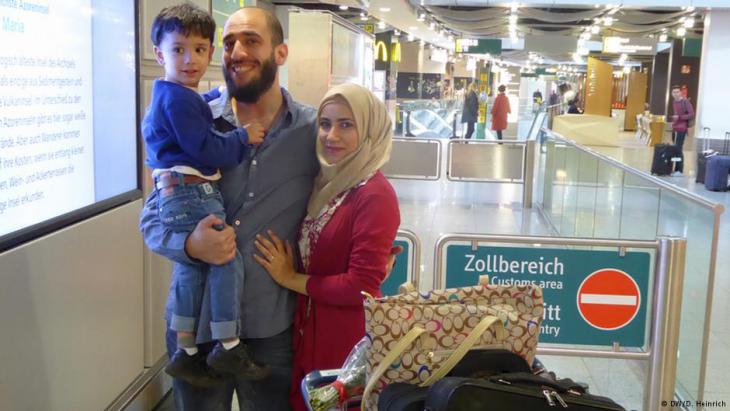 Integration in Germany
On the right track - one refugee's story

Alaa Houd has been through a lot. Fleeing Syria, he survived the hazardous Aegean crossing and an odyssey through German refugee hostels along the way. Distress and anguish about the wife and child left behind in his war-torn homeland were his constant companions. Now, finally, he has a new home in Bonn. By Sebastian Schug

As Alaa Houd approaches, I am greeted by a smile and a cheery wave.  "Hello, how are you? I hope you haven't been waiting long?" he says in German. A hearty handshake is followed by an invitation into the first proper apartment he has had since leaving his native Damascus almost a year and a half ago. Following his dramatic flight to Greece across the sea he was shunted from refugee hostel to refugee hostel in Germany.

The constant strain of last summer, the uncertainty of not knowing whether his application for asylum would be granted, is now gone. Talking to Houd today, I am struck by how much he likes to laugh. He has been in Germany since the autumn of 2014. But it would be almost a year before he was granted permission to bring his family over from Syria to join him. That day arrived two months ago, when his wife, Hiba Al Dagstani and three-year-old son Gabriel, flew in to Germany to join him – one year, one month and five days after he had last seen them.

A new home, a new beginning

The arrival of his family meant that the search for an apartment became top priority. The initial move into the 20 square metres of Houd's room in a shared flat was anything but easy. However, two weeks ago, the three moved into an apartment, which they rent all to themselves, in Bonn's old town.

None of this would have been possible without some help, however. Journalist Claudia Dehn, whom Houd got to know some time ago, provided the necessary support. His "German angel", as he affectionately calls her, took it upon herself to help out with the correspondence and telephone calls in the search for accommodation. Finally, after much effort and trawling of the Internet, Alaa Houd found his dream apartment – welcoming, newly renovated and with a modern kitchen. 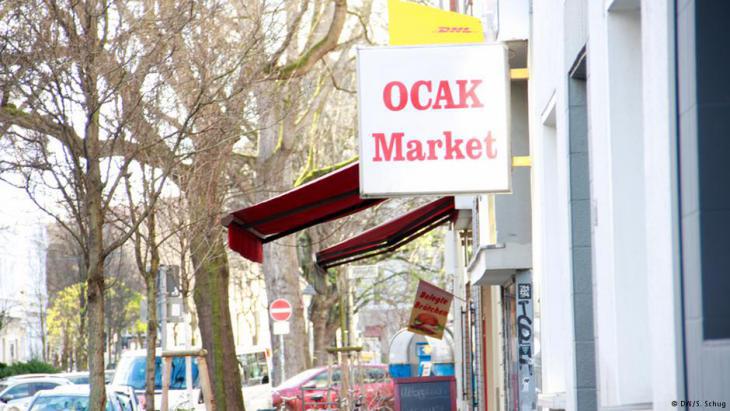 At home in Germany: the Houd family now lives in downtown Bonn. The newly-renovated apartment in the city′s multicultural centre was a stroke of luck

In the end, with 150 others also interested in the apartment, it took a goodly portion of luck and an understanding landlord to help the family clear this final hurdle. His decision to let them have the apartment was based on his compassionate assessment that theirs was the greatest need.

So Houd and his family are now residents of multicultural downtown Bonn. He is at home in Germany, and, when he talks, it becomes clear that he has a plan and that he knows what has to be done – integration course, job centre, youth welfare office. The struggle with German bureaucracy is clearly not going to faze Alaa Houd.

Motivation is not something he lacks and his determination to learn German as quickly as he can is a great help to him in pursuing his goals. Though the family reunion and the apartment search forced him to interrupt his integration course, he is back now and keener than ever.

Learning a language means both understanding and actively using it. The 28-year-old has already managed to dispense with the services of a translator in his dealings with local authorities and officialdom and, for the most part, he is able to understand what he is being told. For the present, most of what he has to say is said in English; bringing his German up to scratch is going to take a little longer. His determination to get there means that language classes are his top priority. He is already good enough to help out other refugees by doing a bit of translation and he encourages his German friends to speak to him in German.

Learning the language and getting to know more people is also important to his wife and their three-year-old son, Gabriel. Applications for German lessons and for a day nursery have already been made. Now they are waiting for an "Antwort" (answer), says Alaa Houd, laughing as he says the German word, which, like so many others, has crept into his English. He is keen to do an apprenticeship; his wife wants to study for a master's degree in literature; for both objectives, learning the language will be crucial.

Hiba Al Dagstani is not yet quite as relaxed about her new life in Germany as her husband is. They left many of their relatives behind in Syria and she is still very worried about them. It was this that made leaving Damascus so emotionally difficult for her. It meant leaving behind not only her homeland, but also most of the people she was closest to. She too, however, is keen to establish new contacts and has the support of the local youth welfare office. It is a first step towards normality.

Little Gabriel, on the other hand, has already settled into his new home. According to Houd, it was terrible for their son being cooped up in the family apartment in Damascus. Life in the Syrian capital for the little boy was like being locked up in prison. While the adults take tea, Gabriel rushes around the living room like a tornado.

Alaa Houd is convinced that his son will soon have forgotten his war experiences. The most important thing for him, he feels, is contact with other children. Perhaps this forgetting might not be quite so straightforward however. On New Year's Eve, as the first fireworks lit up the sky over Bonn and firecrackers exploded on the streets, the three-year-old warned everyone to "hide!" 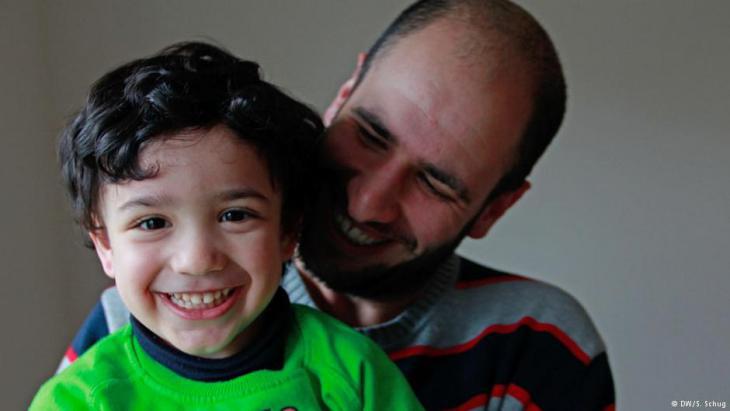 Reunited after over a year: Alaa Houd with his son Gabriel

His father has other reasons for being reluctant to remember New Year's Eve. Of course he and his wife are aware of the mass sexual harassment and assaults on women near Cologne railway station by men from mainly Islamic countries. It is something Houd finds incomprehensible, "abnormal". He cannot remember anything like that ever happening in Syria. The 28-year-old is certain that any man carrying out such assaults in Syria would have ended up in prison. No one would have accepted such behaviour.

When pressed as to why he thinks it happened, he struggles for an answer. It can cause major problems when young men are forced to spend many months in a refugee centre, with nothing to do, without any opportunity to take a German course, or to work or do something for their future. In such a situation they may lose their way, he feels.

Houd knows what he is talking about. After his arrival in Germany, he spent ten months waiting to find out if his asylum application would be approved. He believes that more rules are needed. The younger refugees, in particular, need to learn how to become integrated. And there must be consequences for those who break the rules, he says. Anyone who commits a criminal offence should lose their chance of asylum in Germany.

As far as his own future is concerned, Alaa Houd is positive.  He is also very clear about where he is going and how to get there. His guiding principle is straightforward: "Be the one who sorts things out, not the one who needs to be sorted out!"

Home
Print
Newsletter
More on this topic
Debate on Muslim Identity in the West: Constructing the self, constructing the otherInterview with migration researcher Naika Foroutan: "We need a debate about ourselves"New Year′s Eve assaults on women: The Cologne outcry
Related Topics
Integration in Germany, Muslims in the West, Policy on refugees and migration, Refugees, Syrian Civil War
All Topics

Benjamin Idriz, imam of the mosque in Penzberg near Munich, is one of the most prominent representatives of Islam in Germany. He sees his role as building bridges to mainstream ... END_OF_DOCUMENT_TOKEN_TO_BE_REPLACED

In view of the catastrophic supply situation in Afghanistan, UN authorities are sounding the alarm. Inflation and growing poverty are exacerbating the situation. The Taliban ... END_OF_DOCUMENT_TOKEN_TO_BE_REPLACED

For Western listeners, the sound of the sitar is perhaps the most cliched musical symbol of India. Sitar player Hindol Deb, who lives in Cologne, Germany, has just released his ... END_OF_DOCUMENT_TOKEN_TO_BE_REPLACED

Since the German city of Cologne launched a two-year model project to allow Muslim communities to perform the call to prayer, there has been much heated public debate on the issue ... END_OF_DOCUMENT_TOKEN_TO_BE_REPLACED

People these days are seeking orientation in a rapidly changing world. In response, all religions – each unique in their customs and traditions – need to pull together, says Chief ... END_OF_DOCUMENT_TOKEN_TO_BE_REPLACED
Author:
Sebastian Schug
Date:
Mail:
Send via mail

END_OF_DOCUMENT_TOKEN_TO_BE_REPLACED
Social media
and networks
Subscribe to our
newsletter